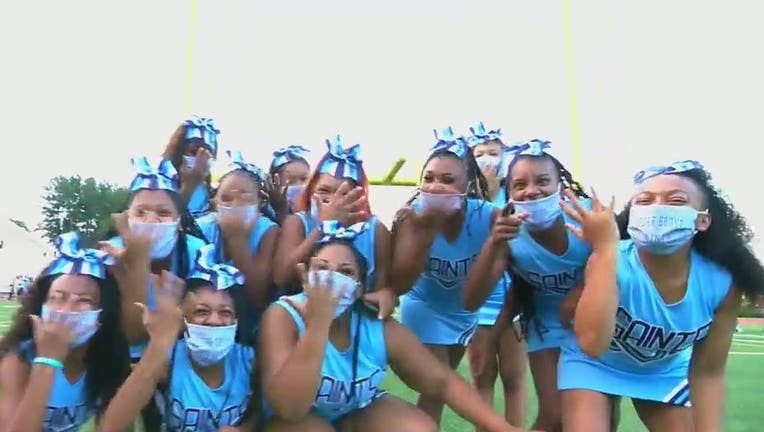 ATLANTA - It is hard to believe, but it is already Week Five of High 5 Sports.

Time seems to have flown by.

It also is the final week of Friday high school football this summer.

Many teams have started their grind to extend their seasons and get into the playoffs.

Next Friday, fall may have arrived, but expect the regional action to heat up even further.

Remember, the leaves may change color, but the gridiron stays green.

But before then, let's say goodbye to summer the best way we know how, with a look at all the action from Week Five.

The Chamblee Bulldogs scored a school record 84 points last week. They were hosting Woodland of Cartersville.

It is time for Purple Power. Lakeside and Cherokee Bluff both proudly showing their colors, but thankfully no rain.

It was the clash of Wolves and Wolverines in Bogart. Wesleyan and Prince Avenue.

The Chargers and the Titans battled it in a cross-metro matchup.

GAC vs. Cedar Grove – Call of the Week

GAC vs. Cedar Grove – Call of the Week

They are a couple of the winningest programs around the state for the last decade. The Spartans and the Saints squared off in our 680 The Fan Call of the Week with Eli Jordan providing the pictures and Karl Werl and Doug Konkel on the call.

Heading down to the Georgia-Alabama line, Newnan travels to meet Harris County on the gridiron.

A couple of Tigers takes to the field to battle it out in DeKalb County.

It was an early game at Hallford Stadium in Clarkston. The Redan Blue Thunder setting the tune for the game between the Raiders and the Panthers.

There is some serious buzz around this Roswell Hornets team. They are 3-0 and ranked No. 6 in the state. They hosted Campbell on Friday.

Griffin vs. Lovejoy – Game of the Week

Griffin vs. Lovejoy – Game of the Week

Two things you hope to never see on a hike are likely Bears and Wildcats. That's what we had in the High 5 Game of the Week. The Lovejoy Wildcats hosted the Griffin Bears. Bill Hartman was right in the middle of it all.

Checking in on the top-ranked team in Class A Private. The Trinity Christian Lions hosting Landmark Christian.

In Coweta County, East Coweta and Northgate playing for just the second time ever. Indians got the titans last year.

The Creekview Grizzlies were this week’s High 5 Team of the Week. And they deserved it after knocking off their archrivals Cherokee last week. Coach Trevor Williams has his team sitting pretty at 3-0, but things got real this week as they opened up region play. And it was Grizzlies against Bears as Cambridge, also undefeated, came to play.

In Region 7-AAAAAAA, the Johns Creek Gladiators and Sequoyah Chiefs also getting their region slate underway.

High 5's Cody Chaffins and Justin Felder take a quick look at what the High 5 cameras may have missed.

High 5 Sports is #INYOURFACE every Friday night at 11 p.m. during Georgia's high school football season. During the "Big Show" catch the High 5 Game of the Week, 680 The Fan Call of the Week, Friday Night Heights, Mic'd Up, highlights, and more. Tune into Good Day Atlanta on Thursday mornings to see the High 5 Team of the Week get presented with the High 5 Hand Trophy. Catch High 5 Sports on Facebook, Twitter, Instagram, and YouTube. And make sure to Cody Chaffins, Justin Felder, Kelly Price, and DJ Shockley for more action.