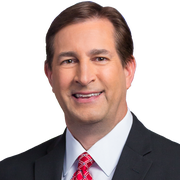 David Chandley is the FOX 5 Storm Team's Chief Meteorologist. After tracking Georgia’s weather for more than 30 years, David chased his dream to be a chief meteorologist and joined the FOX 5 Storm Team in January 2015. You can depend on David every weeknight on FOX 5 News at 5, 6, 10 and 11 p.m., as well as during any severe weather events.

David's broadcast career has taken him all over Georgia, with stops in Albany, Macon, Columbus and a 25-plus year stay at WSB in Atlanta. He has been honored with numerous awards, including 11 Southeast Emmy Awards and countless nominations. David has also received the Associated Press Best Weather Reporting Award 13 times.

David and his wife, Lynn, live in Inman Park. They have two daughters, Lauren Reidy and Leah, son-in-law Kyle, one beautiful granddaughter and two dogs, Pippa and Jack. He loves golf, walking and biking the Atlanta BeltLine and endures CrossFit. David is a DoorHolder at Passion City Church and has worked with numerous Atlanta organizations, including Children's Healthcare of Atlanta, Cystic Fibrosis Foundation, Gwinnett County Schools and Atlanta Ronald McDonald House Charities. While at UGA, David was a student trainer and member of the 1980 football team that won the national championship. 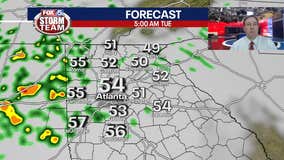 More rain on the way in the days ahead. Parts of North Georgia could see 1-2" thru Wednesday. Here is the latest update. 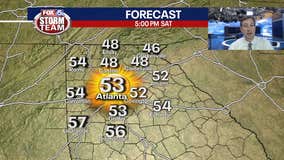 Clear and chilly tonight with temps around freezing by Saturday morning. Most of the weekend looks just fine, more rain next week. Here is the latest. 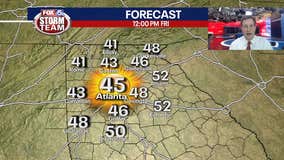 Finally, the rain is moving out and drier air is moving in. Temps will feel ore like February in the days ahead. Here is the latest outlook. 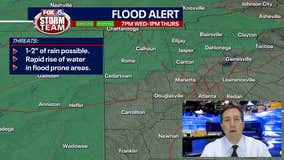 Rain and t-storms will return overnight and into Thursday morning for North Georgia. Expect some heavy rain, areas of flooding and possible strong to severe storms before sunrise on Thursday. Here is your latest update on the timing. 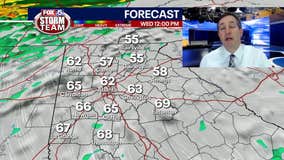 A few showers and t-storms this evening, otherwise cloudy and warm. A greater chance for strong t-storm will be late Wednesday night into early Thursday morning. Here is the latest update. 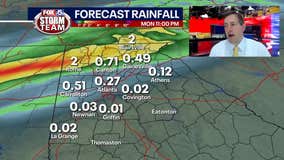 The rain train will continue for several days. Expect widespread flooding across North Georgia with some spots seeing 2-4" of rain. Some strong t-storms are also possible Tuesday and Wednesday. Here is the latest update. 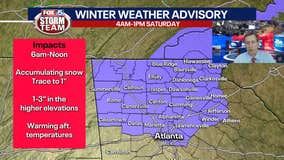 Snow is in the forecast for North Georgia. Quiet tonight and getting colder, then the precipitation begins by 7am Saturday morning. A Winter Weather Advisory is in effect for areas north of I-20. Here is the latest info. 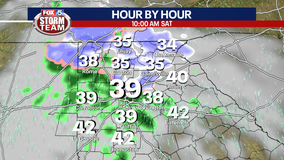 A blast of much colder air and snow flurries are now in place after Thursday's severe weather. 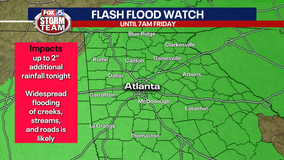 As of early Thursday evening, North Georgia's greatest weather threat will be flooding. Any additional rainfall will increase the flooding risk all over metro Atlanta. About 2 to 4 inches of rain has fallen, creeks, streams, and rivers are at high levels and rising. 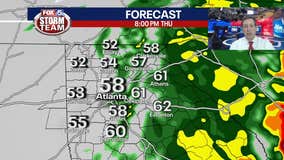 After a very active Thursday morning and afternoon weather wise, it will be getting calmer tonight. Still a few lingering showers and flooding will continue, but no severe storms. Much colder on Friday with a few snow showers. Here is the latest info.