Three people have been indicted accused of setting fire to the Wendy's where police shot and killed Rayshard Brooks in the summer of 2020. Brooks' death sparked protests, some violent, that ended up with the fast-food restaurant being burned to the ground.

ATLANTA - Three people were indicted this week accused of setting fire to the Wendy’s where police shot and killed Rayshard Brooks in the summer of 2020.

A grand jury handed down those indictments on Thursday.

Nearly two full days after the shooting death of Rayshard Brooks, a large group of protesters had gathered around the Wendy’s located along University Avenue, just off the Downtown Connector. Shortly after 9:30 p.m., flames could be seen shooting out of the closed restaurant.

Atlanta Fire Department officials said that the fire at the southwest Atlanta Wendy's started in multiple locations using multiple incendiary methods and devices. Officials estimated that there were at least 10 attempts to set the building on fire.

REWARD OFFERED FOR SUSPECT WHO SET FAST-FOOD RESTAURANT ON FIRE

In video shot that night by FOX 5, a woman can be seen wearing a pink-ish-purple jacket around her waist. She appears to have an aerosol can that she ignites as others smashed windows just seconds before the fast-food restaurant went up in flames.

White's attorney Drew Findling said the woman in those images that investigators released is Natalie White, but that she didn't start the fire.

White's lawyer also confirmed she is the woman Rayshard Brooks was talking about to officers, seen on bodycam video just minutes before he died, but would not elaborate out of respect for the Brooks family.

Some smaller fires were seen in the immediate area of the Wendy's as well. 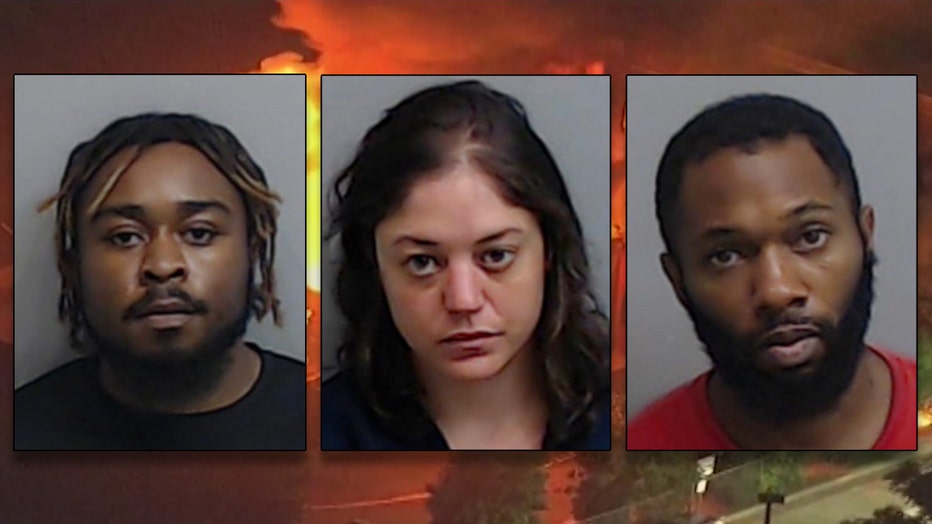 According to the indictment, Wade, White, and Kingston "unlawfully, by means of fire, knowingly and intentionally damaged the building."

The grand jury also found enough evidence to indict the trio with conspiracy to commit arson.

At least 36 people were arrested that evening, but White was apprehended June 22 and Kingston and Wade on July 2.

All three reportedly bonded out following their initial arrests.

FOX 5 was not able to reach any of the now-indicted suspects for comment on Thursday.

Who was Rayshard Brooks?

In the midst of a tumultuous summer of protests responding law enforcement killings of Black Americans, an incident in Atlanta caught the nation’s attention.

Rayshard Brooks was a father of four celebrating his daughter’s birthday at an arcade on June 12, 2020, hours before he was killed in the parking lot of an Atlanta Wendy’s. Brooks had fallen asleep in his car in the drive-thru lane of a Wendy’s restaurant.

Indictments for 3 accused of arson of Wendy's where Rayshard Brooks was killed.

The death of Rayshard Brooks at an Atlanta fast-food restaurant in 2020 sparked protests, some violent, leading to the burning of the building in front of which Brooks was shot and killed by officers. This week, three people were indicted in that arson.

Brooks was shot dead by Atlanta Police Department Officer Garrett Rolfe, who was performing a DUI test with another officer after Brooks was found sleeping in his car while in line at Wendy’s on University Avenue. Police said Brooks attempted to evade arrest and the officers attempted to deploy their Tasers multiple times, but when they finally did, it was ineffective.

Brooks took a Taser away from the officer, police said, and then began to run away and eventually was able to use the Taser against the officer. Rolfe allegedly shot Brooks. An autopsy found that Brooks was shot twice in the back.

Rolfe has been charged with murder and other offenses. The other officer, Devin Brosnan, was charged with aggravated assault and violating his oath. Lawyers for both officers have said their clients acted appropriately. They are free on bond.

Rolfe was fired after the shooting but the Atlanta Civil Service Board reversed that dismissal. It found that the city failed to follow its own procedures for disciplinary actions.

The case was handed over to a special prosecutor in July.

The shooting came at a time of heightened tension over police brutality and calls for reforms across the U.S. following the May 25 death of George Floyd in Minneapolis.

Atlanta was among U.S. cities where large crowds of protesters took to the streets.