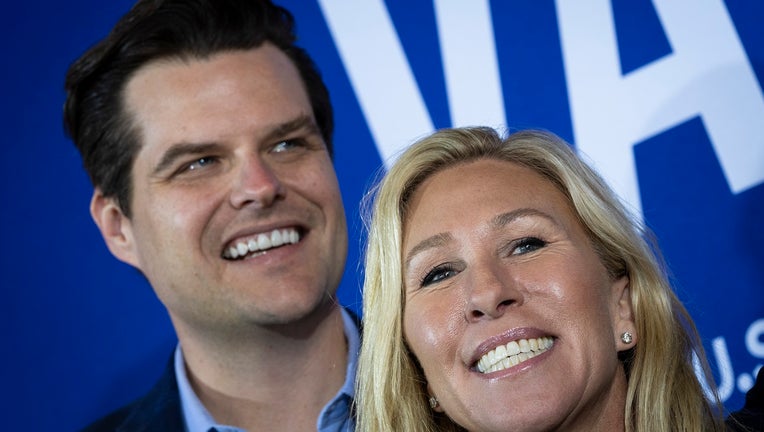 ATLANTA - Georgia Congresswoman Marjorie Taylor Greene is predicting a mass exodus of Republican voters if Democrat Stacey Abrams is elected as the state’s next governor.

During an episode of her MTG Live social media video series earlier this month, she hosted Florida Congressman Matt Gaetz, who she considers an "America First" ally. The two talked about numerous issues, but touched upon Georgia primaries and the upcoming general Midterm Election in November.

"So, but Stacey Abrams, though, she wants to be governor and I think she’s all in on this," Rep. Greene said.

Abrams ran unopposed in the primary and incumbent Gov. Brian Kemp beat out Republican challenger David Perdue last month. It sets up a rematch of the 2018 election that could prove to set new records on money spent on a gubernatorial race. Republican strategist Ryan Mahoney estimated it could cost $250 million overall after campaigns and other groups finish spending.

"George Soros is heavily backing her. She’s got money… she’s got more money than God at this point," Greene said.

Gaetz questioned how future elections would operate if Abrams moved into the Governor’s Mansion with incumbent Secretary of State Brad Raffensperger still in office.

"She wins and she’s the governor with Brad Raffensperger as secretary of state, how long will it take to save Georgia from that because they’re gonna do institutional things to harm the voting process," Gaetz stated.

Greene did not have a direct answer to that, but made the prediction that an Abrams win would turn Georgia even closer to a Blue state through active attrition.

"Yeah, well number one, we have multiple problems. Number one, most people I know who like that’s kids have grown and they’re empty-nesters, they all say, we will move. They’re saying they will move out of Georgia. They will move to Alabama, Tennessee or Florida," Greene said.

"Yeah, y’all are getting everybody," Greene responded.

FOX 5 political analyst Lori Geary takes a look at some of the state runoff races in Georgia.

The secretary of state’s race was the most high-profile of four Democratic statewide runoffs this week, with nominees also being selected for lieutenant governor, labor commissioner and insurance commissioner.

Trump targeted Raffensperger after the 2020 general election for failing to overturn his narrow loss in the state. Raffensperger — who won the praise of some Democrats for refusing to bend to pressure from the former president — dispatched a challenge from a Trump-endorsed primary challenger without being forced into a runoff.

The significance of the position was highlighted by Raffensperger’s appearance as a witness Tuesday before the U.S. House Jan. 6 committee.

Raffensperger won his primary outright, but Democrats on Tuesday made their final choice for state Rep. Bee Nguyen to face him in November. Nguyen actually took over the seat of fellow Democrat Abrams in the Georgia Legislature when she chose to run for governor the first time. Abrams now backs Nguyen’s bid to beat Raffensperger in the fall.

Abrams and her fellow Democratic candidates will have to make the case that Kemp and his fellow Republicans have left a record of failure during the last four years and their current policies do not gel with the average Georgian.

Meanwhile, Kemp may need to go even further to the right than he did during the primary season to get the more than 250,000 people who voted for his challenger, former Sen. David Perdue, to get out to vote for him in November.

Greene believes part of the reason that Kemp and Raffensperger won their primaries was because of the state’s open primary system.

"Do Georgians have batter spouse syndrome?" Gaetz asked, adding that maybe if voters show their candidates just a little more "love," they will be taken better care of by their candidates.

GET THE LATEST HEADLINE ON GEORGIA POLITICS

Greene responded by explaining Georgia's open primary. Several reports suggest many Democrats actually swapped sides during this primary season to oppose candidates endorsed by former President Donald Trump. An analysis provided by data firm L2 found that more than 37,000 people who voted in Georgia’s Democratic primary two years ago crossed over to cast ballots in the May 24 Republican primary.

Gaetz retorted that the Florida Gators should be able to pick the referees next time they play the Georgia Bulldogs, if that were the case.

Still, both representatives believe the fear of an Abrams victory alone will drive Republican voters to the polls or drive them away entirely.

GET THE LATEST HEADLINES ON THE 2020 MIDTERM ELECTIONS

Georgia politics, once sleepy and Republican-dominated, have never settled down since 2018, and the intensity is clearly driving voter interest. More than 1.9 million Georgians cast ballots in the primaries. Republican turnout of nearly 1.2 million topped the previous 2020 record, while Democratic turnout of more than 700,000, despite few compelling races, topped the 2018 midterm record, but not the 2020 record.

Expect the ads, rhetoric, and debate to heat up along with the summer temperatures. Election Day is less than 140 days away on Nov. 8 with early voting set to begin Oct. 17.