ATLANTA - Diane Murray struggled with her decision all the way up to Election Day.

But when the time came, the 54-year-old Georgia Democrat cast a ballot in last week’s Republican primary for Secretary of State Brad Raffensperger. While state law allowed her to participate in either party’s primary, she said it felt like a violation of her core values to vote for the Republican. But it had to be done, she decided, to prevent a Donald Trump -backed "election denier" from becoming the battleground state’s election chief.

"I feel strongly that our democracy is at risk, and that people who are holding up the big lie, as we call it, and holding onto the former president are dangerous to democracy," said Murray, who works at the University of Georgia. "I don’t know I’ll do it again because of how I felt afterward. I just felt icky." 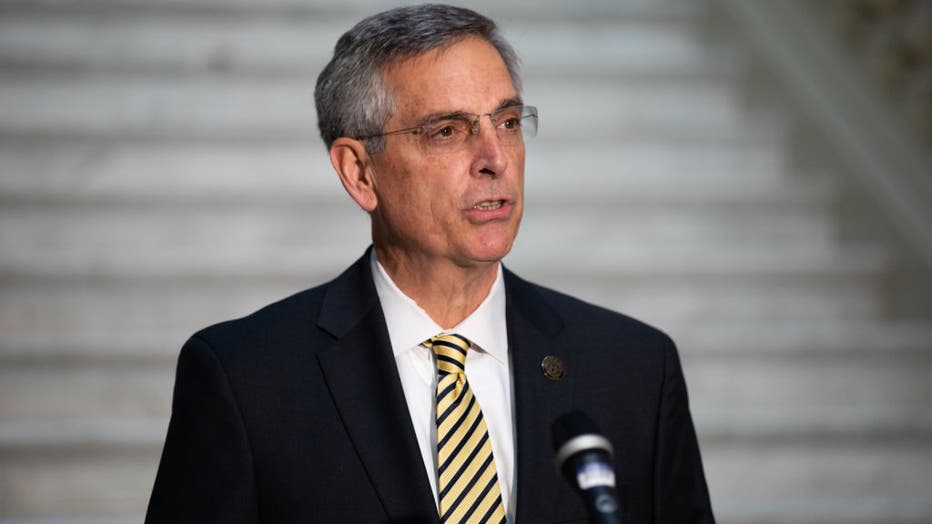 Raffensperger, a conservative who refused to support the former president’s direct calls to overturn the 2020 election, probably would not have won Tuesday’s Republican primary without people like Murray.

An Associated Press analysis of early voting records from data firm L2 found that more than 37,000 people who voted in Georgia’s Democratic primary two years ago cast ballots in last week’s Republican primary, an unusually high number of so-called crossover voters. Even taking into account the limited sample of early votes, the data reveal that crossover voters were consequential in defeating Trump’s hand-picked candidates for secretary of state and, to a lesser extent, governor.

Gov. Brian Kemp did not ultimately need Democrats in his blowout victory against his Trump-backed opponent, but Raffensperger probably did. The Republican secretary of state cleared the 50% threshold required to avoid a runoff election by just over 27,000 votes, according to the latest AP tallies. Based on early voting data alone, 37,144 former Democrats voted in the Republican primary. The total number of crossovers including Election Day votes, set to be revealed in the coming weeks, may be even higher.

Republican candidates Gov. Brian Kemp and Herschel Walker were seen Thursday night thanking supporters and more during their celebratory speeches after taking home winning titles in the primary election. Gov. Bran Kemp will face Stacey Abrams in November after defeating former President Trump-endorsed candidate David Perdue in the GOP Governor primary race. Herschel Walker, who was endorsed by Trump, was named GOP Senate primary winner and is set to go up against Sen. Raphael Warnock for November's elections in Georgia.

Crossover voting, also known as strategic voting, is not exclusive to Georgia this primary season as voters across the political spectrum work to stop Trump-backed extremists from winning control of state and federal governments. The phenomenon is playing out in multiple primary contests, sometimes organically and sometimes in response to a coordinated effort by Trump’s opponents.

While Trump railed against the practice over the weekend, there is nothing inherently wrong with crossover voting. Dozens of states make it legal and easy for voters to participate in either party’s primary. And there are several isolated incidents of both parties engaging in strategic voting over the years.

Still, Trump warned conservatives about crossover voting while campaigning Saturday in Wyoming, another state where the former president’s opponents are calling for Democrats to intervene — this time to help save Rep. Liz Cheney from a Trump-backed primary challenger. Cheney, like Raffensperger and Kemp, refused to embrace Trump’s lies about the 2020 election. She also voted for his second impeachment after the Jan. 6 insurrection.

"Don’t let the Democrats do what they did in another state last week," Trump told Wyoming supporters, complaining about what happens "when you allow Democrats to vote in a Republican primary."

While the practice has Trump’s attention, it is often ineffective.

Rep. Marjorie Greene thanks her supporters and says she is looking forward to a Republican majority in 2022 during her congratulatory speech after GOP primary win.

Trump’s opponents encouraged Democrats to help defeat U.S. Rep. Marjorie Taylor Greene in her Georgia primary last week. The congresswoman, who has embraced election lies and spoken at an event organized by a white nationalist, won by more than 50 percentage points.

And in some cases, Democrats have been too focused on their own competitive primaries to cast a Republican ballot. That was probably the case in Pennsylvania, where some Democrats openly encouraged their base to vote for the Republican candidate for governor, Doug Mastriano, whose extreme views they felt made him more beatable in November. On the same day, Democrats were deciding their own high-stakes Senate primary.

If the advance vote in Pennsylvania is any indication, few Democrats heeded the call to vote GOP.

Of Republican primary voters who cast early or absentee ballots this year, only 1.7 percent voted Democratic in the 2020 primary. Those 2,600 votes, even if ultimately bolstered by more Election Day participants, were unlikely to have moved the needle in an outcome in which Mastriano beat his closest rival by nearly 320,000.

On the forefront of the crossover movement, Rep. Adam Kinzinger, R-Ill., has called for an "uneasy alliance" between Democrats, independents and Republicans to take down pro-Trump candidates in GOP primaries whenever and wherever possible. Some states have open primaries like Georgia that allow people to vote in either primary, while other states have more restrictive rules.

In an interview, Kinzinger said he was pleasantly surprised by the Democrats’ response in some races. He said he never expected the movement to be an "earth-shattering game-changer" right away.

Kinzinger’s political organization, Country First, targeted thousands of former Georgia Democrats with mailers and text messages urging them to support Raffensperger for the sake of democracy.

A Country First text message widely distributed to Georgia voters in the days before the election read: "Don’t wait for until the general election to go after the extremes. Vote in the Republican Primary for the candidate that supports truth and democracy."

As was the case in Georgia, the AP found a sizable percentage of Republican early ballots were cast by voters who participated in the Democratic primary two years ago. Specifically, more than 14% of the 38,000 early or absentee votes cast in the Cawthorn race — more than 5,400 voters — came from a Democratic 2020 primary voter.

Cawthorn lost his primary by fewer than 1,500 votes.

Back in Georgia, Raffensperger’s team pushed back on the idea that he won the GOP primary because of Democrats. The team suggested that a number of crossover voters were actually Republicans who voted Democratic in recent years to protest Trump.

"It is clear that Brad Raffensperger carried a majority of the Republican vote here in the state of Georgia, and that there are people who stopped voting in Republican primaries after 2016 who are now reengaged," said Jordan Fuchs, a consultant to the Raffensperger campaign.

An AP examination of voting records from before the Trump era shows at least a portion of Georgia’s 37,000 party switchers in 2022 had been in the Republican camp before Trump took office. Roughly between 9,000 to 13,000 voted Republican in the 2010, 2012 and 2014 primaries, according to the L2 data.

Trump allies in the state, caught off guard by the crossover trend, were furious.

"It was a Democratic version of ‘Operation Chaos,’" said Debbie Dooley, president of the Atlanta Tea Party, referring to the secret Nixon-era push to infiltrate liberal groups. "I did not realize just how heavily the Democrats were going to cross over."

Dooley launched a petition late last week to close Georgia’s Republican primaries to non-Republicans. More than a dozen states have closed, or partially closed, primaries that block members of opposing parties from participating.