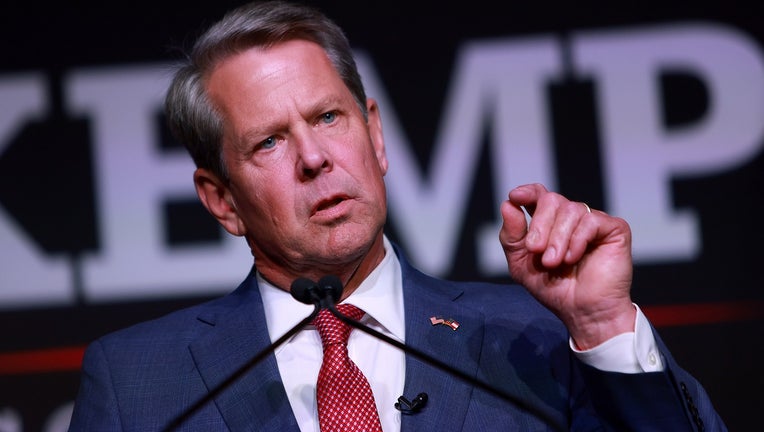 ATLANTA - Georgia Governor Brian Kemp has been subpoenaed to provide taped testimony to a Fulton County special purpose grand jury empaneled to investigated whether former President Donald Trump and others illegally tried to influence the 2020 election in the state.

Gov. Kemp will make a recorded statement on July 25. This is unlike others called to testify before the specially seated grand jury. Special Prosecutor Nathan Wade in a letter to the governor wrote the special treatment was "in a spirit of cooperation with the Governor and his schedule."

In addition, the prosecutor is asking for all material related that "represents, explains, and provides context" about the presidential election in November 2020 as well as the 60 days after and the certification of Georgia’s votes on Jan 6, 2022.

The subpoena covers correspondences, call logs, recordings, emails, mailings, letters, documents, and other media relating to former President Donald Trump or others working on his behalf of his interests.

The governor's office said on Thursday evening it does not have a comment at this time.

Kemp will be the highest-profile witness to-date. Secretary of State Brad Raffensperger and Attorney General Chris Carr have both given their testimony.

Kemp was put in the political crosshairs by Trump after the governor’s refusal to acquiesce to the former president’s false claims that he actually won the election instead of Joe Biden. Trump lost Georgia to Biden by 11,779 votes. The former president would later back former Senator David Perdue in a primary challenge against Kemp in retaliation for his inaction. The incumbent governor staved off the attack by more than a 50-point margin.

Twenty-three grand jurors and three alternates were chosen on May 2. Fulton County Superior Court Judge Robert McBurney, who is overseeing the special grand jury, told grand jurors they will be investigating actions surrounding the 2020 general election.

The grand jury is examining whether anyone broke the law during the tumultuous days leading up to the Jan. 6 attack on the U.S. Capital. Anyone, including the former president.

It's not clear what, if any, charges Willis could choose to pursue against Trump or anyone else. In a letter she sent to top-ranking state officials last year, she said she was looking into "potential violations of Georgia law prohibiting the solicitation of election fraud, the making of false statements to state and local government bodies, conspiracy, racketeering, violation of oath of office and any involvement in violence or threats related to the election's administration.

"The right to vote is very, very important. Making sure that that's not tainted or that it's not impacted in any way, it is a very serious thing," Willis said.

The special grand jury has up to a year to complete their investigation and make any recommendations.

Georgia Secretary of State Brad Raffensperger testified in front of a special grand jury on Thursday. The special grand jury is looking into investigating allegations that President Donald Trump and associates tried to meddle in the 2020 election in Georgia.

Georgia Secretary of State Brad Raffensperger was the first subpoenaed witness to testify in front of a special purpose grand jury investigating whether anyone, including the former president, should face charges for trying to influence the results of the 2020 election.

RAFFENSPERGER: TRUMP CALL TO ‘FIND’ VOTES IN GEORGIA WAS A THREAT

Raffensperger did not take questions from reporters gathered outside the courthouse when he arrived the morning of June 2.

His testimony likely centered around a phone call made by the then-President to Raffensperger in January 2021.  During that call, President Trump seemed to urge Sec. Raffensperger to change the results.

"I just want to find 11,780 voters, which is one more than we have," Trump said in the recorded call.

"I heard what the president said," Sec. Raffensperger told the FOX 5 I-Team.  "And I understand that he has tremendous positional power, but also know that we all follow the constitution."

Sec. Raffensperger's wife, Tricia Raffensperger, also appeared at the Fulton County Courthouse. Like her husband, Mrs. Raffensperger received death threats in the wake of the 2020 election.

The key witness for the Fulton County special purpose grand jury investigating if former President Donald Trump and others illegally tried to influence the 2020 election in Georgia spoke exclusively to FOX 5 I-Team senior reporter Dale Russell before testifying. Georgia Secretary of State Brad Raffensperger said he "followed the law" and "followed the Constitution."

FOX 5 sat down with Raffensperger before his testimony. When asked if he was nervous about testifying, Georgia's election chief said "not at all."

Trump targeted Raffensperger after the 2020 general election for failing to overturn his narrow loss in the state. Raffensperger — who won the praise of some Democrats for refusing to bend to pressure from the former president — dispatched a challenge from a Trump-endorsed primary challenger without being forced into a runoff.

The significance of the position was highlighted by Raffensperger’s appearance as a witness Tuesday before the U.S. House Jan. 6 committee.

Republican Attorney General Chris Carr is expected to testify about a 15-minute phone call then-President Donald Trump made to him in December 2020.

The Texas Attorney General filed a lawsuit against Georgia and three other states seeking to throw out millions of votes from all four states.

Republican Attorney General Chris Carr is expected to testify about a 15-minute phone call then President Donald Trump made to him in December 2020.

At the time, Carr released a statement saying the lawsuit was "constitutionally, legally and factually wrong.

"That same day he gets a call from Trump directly to warn him against opposing the Texas lawsuit," said Clark Cunningham.

Cunningham, a Georgia State law professor and expert on legal ethics, says Carr is expected to testify about the phone call from then President Trump.

In his call to Chris Carr, the president reportedly warned Georgia’s attorney general not to rally other Republicans to oppose the lawsuit.

" If Trump was trying to assert political pressure on Attorney General Carr to not defend that case effectively, that he was trying to coerce or solicit violation of oath office, that might be a crime the Grand Jury is thinking about," said Cunningham.

The US Supreme Court denied the motion. Attorney General Chris Carr had no comment. FOX 5 could not reach the former president.

The grand jury is also expected to hear testimony regarding Rudy Giuliani's claims before the Georgia legislature of stolen votes - claims that have been debunked.

Another topic for review, Sen. Lindsey Graham's call to Raffensperger when Graham asked Raffensperger if he could throw out all the absentee ballots in a county that had a high number of mismatched signatures on mail-in votes.

A spokesperson for Graham called it "a ridiculous accusation." While acknowledging the call, he said Graham "never asked the Secretary of State to disqualify a ballot cast by anyone."