The Coweta County Sheriff's Office released this 31-minute video recorded on a deputy's bodycam showing a chase involving a U-Haul truck on Oct. 11, 2020. Investigators said Jackie Harris was shot three times at the end of the chase near Interstate 85 near the Bullsboro Blvd. exit. He suffered a spinal cord injury. The GBI investigated the use of force and turned over its findings to the district attorney. Prosecutors determined the use of force was justified. This is the full video released by the Coweta County Sheriff's Office on Nov. 5, 2021. Some may find this video disturbing to watch.

COWETA COUNTY, Ga. - The Coweta County Sheriff’s Office released a video on Tuesday showing a dangerous high-speed chase involving a U-Haul truck in October 2020. Investigators said a deputy was forced to open fire on that driver after trying to ram several vehicles during the pursuit.

It started on Oct. 11, 2020, around 9:16 p.m. The Coweta County Sheriff’s Office said deputies were dispatched to the BP gas station along US-27 after reports of two people breaking into tractor-trailers. Deputies said those two were found at the nearby Pilot Travel Center where they were caught in the act of trying to breaking into a tractor-trailer.

The two suspects spotted deputies, jumped into a large, rented U-Haul truck, and took off. The box truck weaved through the parking lot as deputies followed with deputies following with their lights and sirens on. On the video from the lead deputy’s bodycam, he can be heard asking for stop sticks. 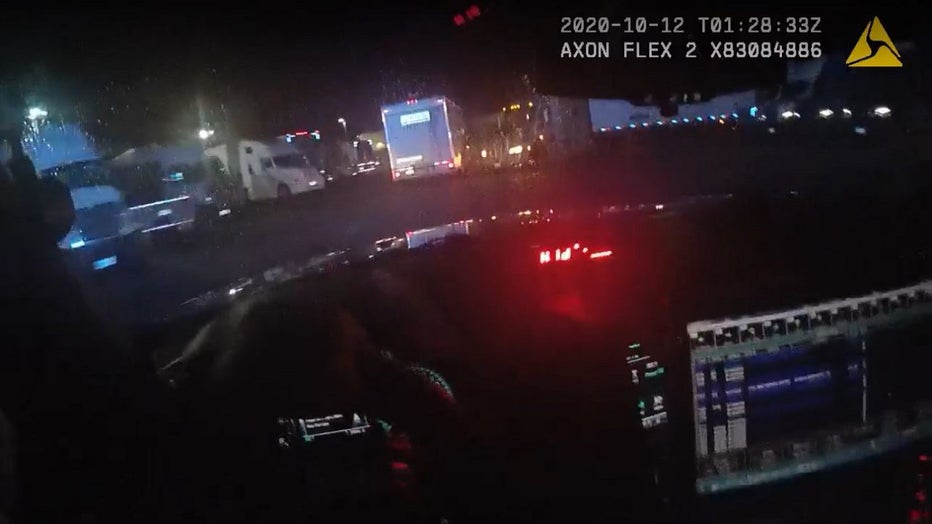 Bodycam from a Coweta County deputy shows the driver of a U-Haul truck fleeing the Pilot Travel Center along US-27 on Oct. 11, 2020. (Coweta County Sheriff's Office)

The truck had just turned south on US-27 when it struck a car head-on. The occupants of that vehicle were OK.

The driver of the U-Haul did not stop and continued down US-27 to US-29 driving in the wrong lane of traffic. Investigators said speeds reached 80 mph in 45 and 55 mph speed zones. 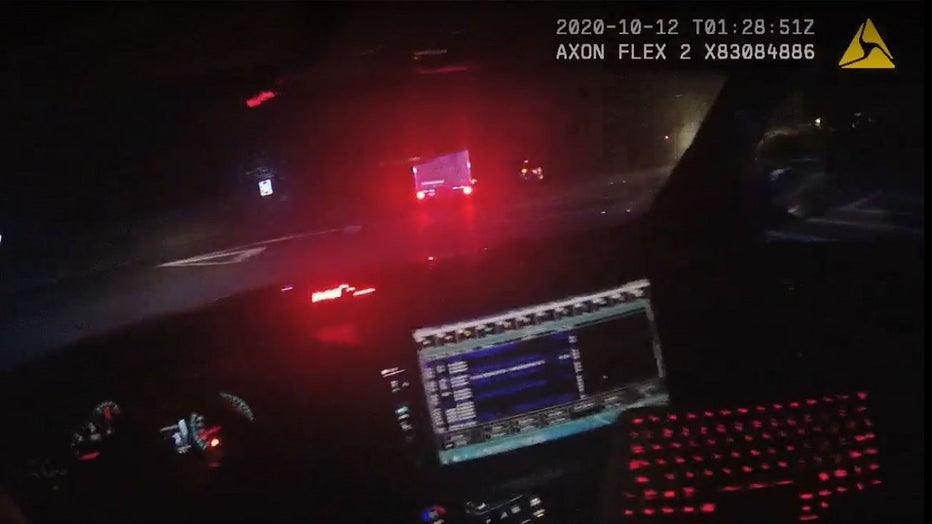 Bodycam from a Coweta County deputy shows the driver of a U-Haul truck slam head-on into a car in front of the Pilot Travel Center along US-27 on Oct. 11, 2020. (Coweta County Sheriff's Office)

"Still going down 27, it just tried to ram a car head-on," one deputy could be heard radioing dispatch.

"Officer advising he's got no lights on and is going southbound. It will be two males and advising he is driving in the wrong lane of traffic. We need to get stop sticks out..." the deputy told dispatch.

The driver eventually got onto US-29, headed towards Grantville before turning onto Interstate 85 northbound. 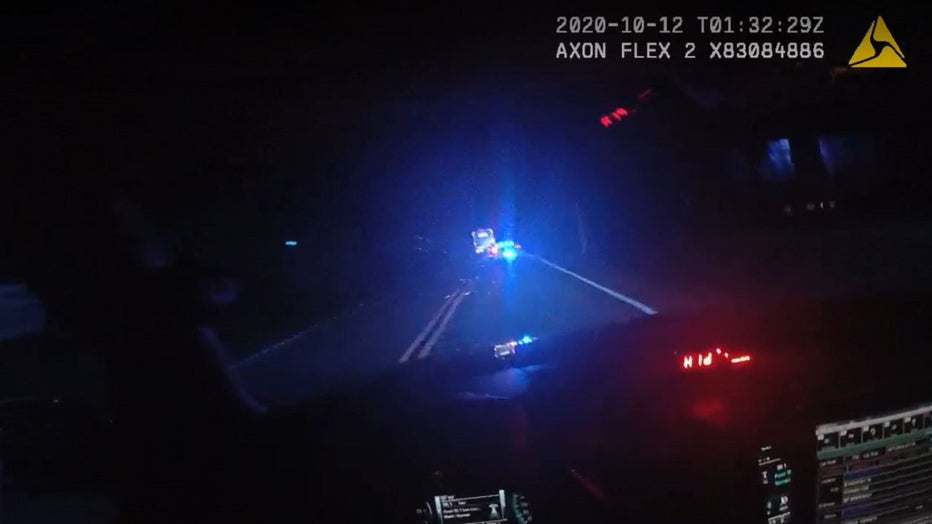 Bodycam from a Coweta County deputy shows the driver of a U-Haul truck driving in the wrong lane without its lights on along US-27 on Oct. 11, 2020. (Coweta County Sheriff's Office)

"This one, we're staying with it. If it goes into Fulton," the deputy told dispatchers and asked to notify Fulton County law enforcement officers.

The driver kept going north on I-85, avoiding stop sticks along the way at least three times by swerving across the three lanes of traffic, narrowly missing tractor-trailers and tanker trucks.

"He’s trying to hit us as we get around," the deputy could be heard saying.

Deputies also unsuccessfully tried to box in the box truck, but were met with the broadside of the vehicle each time. And using the PIT maneuver was out of the question.

As the chase progressed, deputies were looking for ways to end the chase safely.

"I am trying to obtain permission from CO to shoot the tires out, if that's an option for y'all," one law enforcement officer on the radio could be heard telling deputies. 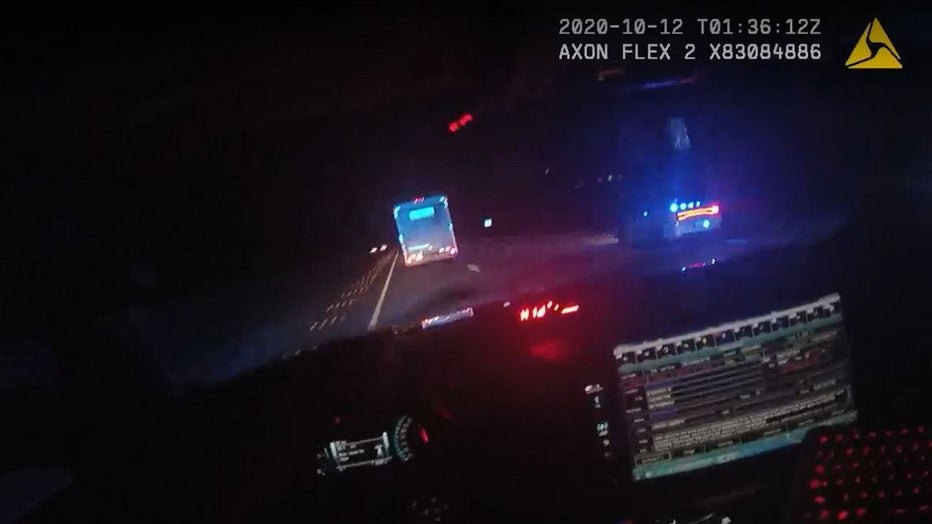 Bodycam from a Coweta County deputy shows the driver of a U-Haul swerve to avoid stop sticks during a high-speed chase along I-85 on Oct. 11, 2020. (Coweta County Sheriff's Office)

But it was when the driver of the U-Haul began to aim at the cars parked along the side of the interstate that the stakes became higher.

Officer over the radio: "We got motorists pulling over, he's trying to hit them as well."

Deputy: "Be advised, we're at 'deadly force' in this situation, guys. If we get the chance, I'm not going to let him hurt somebody else."

A statement from the Coweta County Sheriff’s Office outlines what happened next:

"Given the circumstances and the risk to everyone on the roadway, one deputy with supervisory authority determined it was necessary to utilize deadly force. That deputy pulled alongside the U-Haul from the driver’s side and fired his service weapon three times into the cab of the U-Haul. The bullets struck the vehicle, but the driver continued to flee. The deputy then repeated this maneuver, firing three additional shots into the cab of the U-Haul. The U-Haul then pulled to the right, scraped a concrete wall, and finally came to a stop on the bridge over Bullsboro Road. The chase lasted approximately sixteen minutes and over nineteen miles." 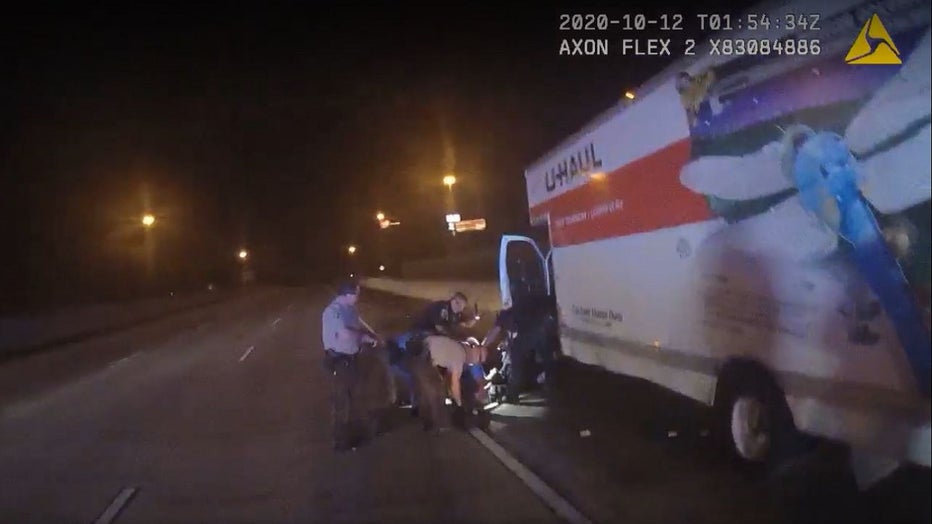 Bodycam from a Coweta County deputy shows deputies pulling the injured driver from a U-Haul after a high-speed chase along I-85 on Oct. 11, 2020. (Coweta County Sheriff's Office)

Both men were detained. The driver, later identified by investigators as Jackie Harris, suffered three gunshot wounds with one bullet striking his spinal cord, leaving his paralyzed.

Harris admitted to paramedics that he took an "8 ball" just before the chase and was intoxicated. Deputies said they found a small amount of cocaine in his pockets.

The Georgia Bureau of Investigation was asked to review the deadly use of force. The agency turned its findings over to the district attorney who believed the shooting was justifiable.

A statement released Tuesday by the Coweta County Sheriff’s Office reads in part:

"During this chase, Mr. Harris fled from law enforcement at speeds that exceeded the speed limit by more than 20 mph, and in traffic conditions which placed the general public at risk of receiving serious injuries. Mr. Harris was therefore committing the felony crime of Fleeing or Attempting to Elude Police Officer, OCGA 40-6-395. Harris also intentionally drove the U-Haul toward other people, including the pursuing officers, thereby committing the felony offense of Aggravated Assault, OCGA 16-5-21.

"Given that the nature of Mr. Harris’s driving made him a suspected felon, officers were permitted to use deadly force to apprehend him because it was reasonable to believe that Mr. Harris posed an immediate threat of physical violence to every other person on the road. Additionally, a vehicle, like Mr. Harris’ vehicle, is an object which when used offensively is likely to result in serious bodily injury, which means the Deputy was also permitted to use deadly force to protect others from Mr. Harris’s commission of the offense of Aggravated Assault. While Georgia law does not require officers to try to use less than lethal force in these situations prior to using deadly force, the fact that deputies tried and failed to bring the U-Haul to a stop with spike strips further demonstrates the danger Mr. Harris’s driving presented during this chase.