Elcias Hernandez Ortiz remembers the moment he begged for his life before he was shot.

One victim who narrowly escaped with his life spoke to FOX 5 Atlanta's Patty Pan about surviving being shot in the head inside Youngs Asian Massage in Cherokee County.

Elcias Hernandez Ortiz said — through his lawyer and translator Doug Rohan — he begged the shooter for his life before he was shot in the head and miraculously survived.

Ortiz said it was his first time going to Youngs Asian Massage in Cherokee County.

Ortiz was alone in a therapy room when he heard shooting, he said through a translator.

"He was down on the floor saying, 'Please don't shoot me,'" Rohan said.

Through Rohan, Ortiz recounted what were nearly his last moments.

"And that I knew God was with me at that time because the shooter said, 'Look up at me,' so, he looked up and that's when he shot him," Rohan said, translating Ortiz's story. "And the bullet entered just on the side of his nose and traveled down in through his throat. And if he hadn't look up at the shooter, he probably would have just been shot in the back of the head and it would have been a different story."

Ortiz's lawyers said a bullet missed his brain by millimeters and ricocheted off the inside of his skull and traveled down his esophagus into his lungs. The bullet remains lodged in his abdomen, where doctors say it's too dangerous to remove. Ortiz was in ICU recovering from numerous surgeries for nearly one month. 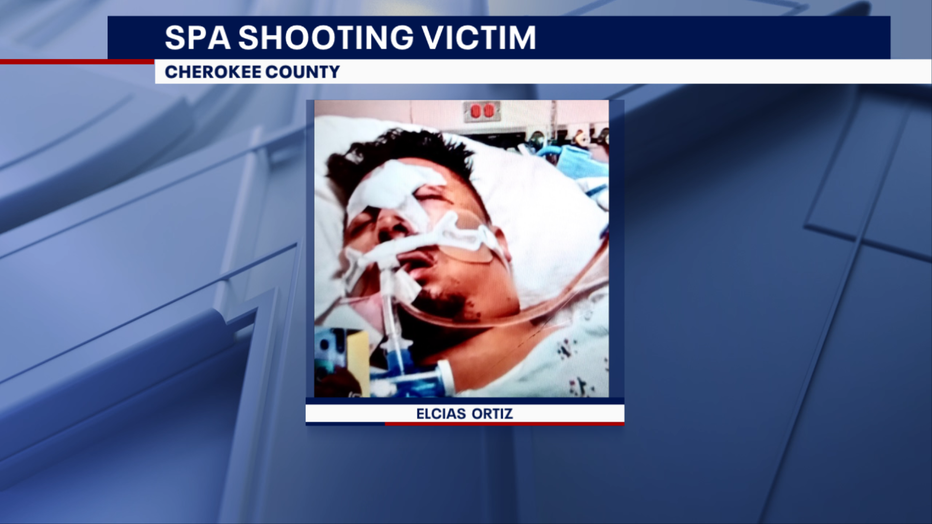 Ortiz said he is a walking miracle and that God was watching over him that day.

"I mean, it was clear that God was with me in this process," Ortiz said through lawyer and interpreter, Rohan. "I am a miracle and I got to see it with my own eyes. Frankly, the doctors and surgeons were saying the same thing. You know the doctors see everything, so when they're using those terms too, when they're using 'miracle' with regard to my recovery, you can know firsthand that that is what happened."

Ortiz is still incapacitated and unable to work, according to his lawyers. A GoFundMe page was established to help him and his family with medical bills and living expenses.

His attorney and law firm, Rohan Law, is taking on the case pro bono.

On March 16, 21-year-old Robert Aaron Long was taken into custody in Crisp County after driving more than 180 miles, being on the run for almost four hours, and making three deadly stops along the way, investigators said.

A month later, Ortiz said he wants justice for all of the victims in the shooting, but he is not angry about what happened to him.

Georgia legislators introduced policies in response to the shootings. These did not go to a hearing during the 2021 legislative session but are alive for next year's session.

House Bill 789 and Senate Bill 311 would direct the Georgia Peace Officer Standards and Training Council to train members of law enforcement in community response, intervention and provide language-accessible outreach programs, according to an announcement.

House Bill 787 would direct the Georgia Emergency Communications Authority to establish a language translation system within the state’s 911 communications center.

House Bill 788 and Senate Bill 309 would require a five-day waiting period for the purchase of a firearm, including a prior background check by the National Instant Criminal Background Check System, and make it a felony for violators selling or buying a firearm before the waiting period.