ATLANTA - Gov. Brian Kemp has issued a shelter-in-place order for the state of Georgia.

"Building on the previous order and directives we have issued, this order is a common sense, measured step forward to stop the spread of COVID-19," the governor said in a video posted to Facebook. "This order maintains social distancing directives and requires residents and visitors to our state to shelter in place in their homes or place of residence.

Exceptions to the order include:

As part of the order, restaurants and private social clubs will have to stop dine-in services. Take-out, curbside pick-up and delivery are still options.

More guidance on the order can be found here.

"I want to urge all Georgians to remain calm through this process. You can still go to the grocery store, and we are working with retailers to keep the supply chain moving and the shelves stocked," the governor said.

Kemp said he would also be signing an order closing Georgia kindergarten and public schools for the rest of the academic year.

The new orders come after the Georgia Department of Public Health confirmed more than 4,600 cases of coronavirus in the state. Health officials report 139 people have died and over 950 are hospitalized due to the virus.

SEE ALSO: If you violate Georgia's shelter-in-place order, then you are breaking the law 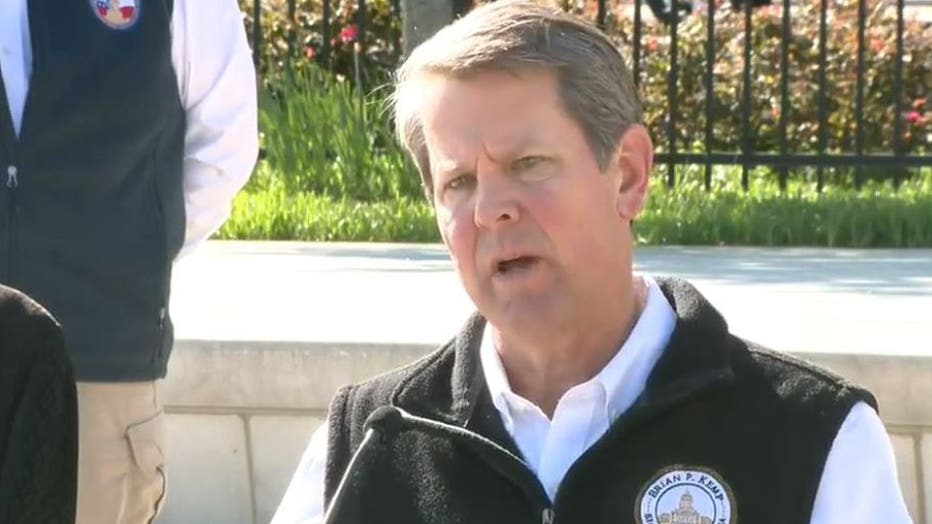 Citing research by The Institute for Health Metrics and Evaluation, the governor said that the state's hospitals would be at capacity on April 23 if the same amount of social distancing was currently enforced.

"Now is the crunch time for us to lessen the peak, to make the bullseye smaller so we don't overrun our health care system," Kemp said, saying that the next three weeks are critical for Georgia and that Georgian's need to "hunker down."

Under the new power of the order, Kemp said he will be enforcing the new shelter-in-place restrictions using law enforcement. People caught not complying with the order will be punished with a fine or misdemeanor.

Gov. Kemp, Dr. Toomey, and other state leaders hold a press conference to announce school being closed for the rest of the year as a shelter-in-place order is being drafted to begin Friday.

Speaking to the press, he admitted that he had concerns with issuing the order, but "at this point, I think it is the right thing to do" after he learned that people who are asymptomatic with the disease could still spread the virus throughout the community.

"We felt the time was now to take some more aggressive measures," the Georgia Department of Public Health's Dr. Kathleen Toomey said.

Since the outbreak started, Kemp has previously closed schools, banned gatherings of 10 or more people, shut down bars and nightclubs and ordered people in fragile health to stay home. But he resisted calls for a statewide order for all Georgians to shelter at home, saying those decisions are best left to local governments. The result has been a patchwork of ordinances that can vary widely even between neighboring communities.

Gov. Brian Kemp ordered all public schools to remain closed through the end of the year and said a shelter-in-place order will be in effect statewide by Friday.

Testing for COVID-19 has been limited in Georgia, with results often taking longer than a week. That’s hindered the ability of state health officials to know how widespread infections truly are.

WHAT YOU NEED TO KNOW: Counties and cities under 'shelter in place' mandates

On Monday, the Georgia Municipal Association held a conference call for the state's mayors to update them on the virus response. But, as the number of counties in Georgia without a case of COVID-19 shrinks to just 20 out of 159. Officials said there’s still disagreement over what role the state should play.

“But there is a growing number of mayors calling for that,” Hanson said.

“There’s no question there are a number of mayors who are concerned and fearful and are trying to manage this crisis at the local level,” he said. “And some think that more stringent actions are needed.”

Kemp’s office said in a news release Tuesday that state health officials working with clinical laboratories at Georgia universities should soon be able to process up to 3,000 test samples daily using equipment borrowed from campus research labs and new methods approved by a state task force.

Meanwhile, the state Board of Pardons and Paroles said it’s reviewing cases of some inmates for possible early release to help prisons manage infection risks. A news release said the board is weighing clemency for some nonviolent offenders within roughly six months of finishing their sentences.

For most people, the virus causes mild or moderate symptoms, such as fever and cough, that clear up in two to three weeks. For some, especially older adults and people with existing health problems, it can cause more severe illness, including pneumonia and death.

The Georgia Municipal Association last week urged all 538 cities statewide to adopt some type of emergency order aimed at slowing the spread of the virus. Hanson said he didn’t know how many had adopted such measures, but the association’s website Tuesday listed roughly 60 cities and counties that had taken action.

Social distancing is not only about preventing the illness itself, but rather, slowing the rate at which people get sick.&nbsp;