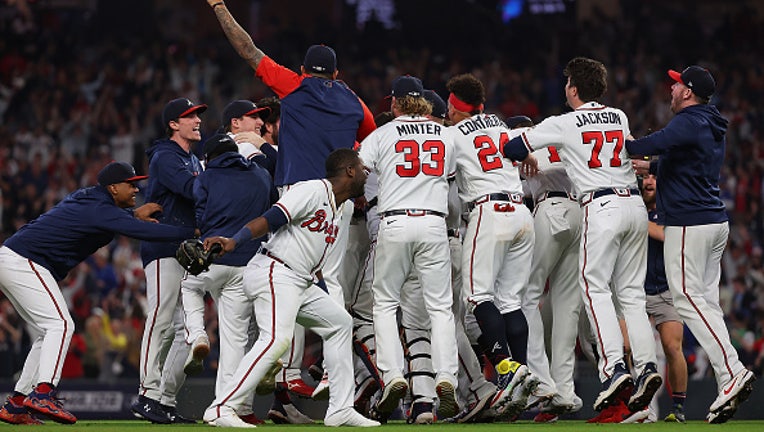 ATLANTA, GEORGIA - OCTOBER 23: Members of the Atlanta Braves celebrate after defeating the Los Angeles Dodgers in Game Six of the National League Championship Series at Truist Park on October 23, 2021 in Atlanta, Georgia. The Braves defeated the Dodg (Getty Images)

HOUSTON - The countdown is on for the Atlanta Braves and Houston Astros to play on professional baseball's biggest stage: the World Series.

The Braves advanced past the National League Championship Series to face the American League champion Astros, with Game 1 set for Tuesday on FOX.

Whether you're attending a game in Houston or Atlanta or planning on watching from the comfort of your home, here's some essential information about this year's Fall Classic.

Fans excited to cheer on Braves in World Series

The 2021 World Series, like the prior Championship series, is a best-of-7 series with the Astros hosting up to four home games and the Braves hosting up to three.

Home field advantage was determined by the team with the best regular season winning percentage.

All games will be broadcast on FOX. Coverage starts at 8 p.m. each night. Joe Buck and Atlanta Braves legend John Smoltz will call the game from the broadcast booth.

Major League Baseball says games will be available to stream for MLB.TV subscribers through a participating TV provider.

Pre-game coverage for each game begins at 7:30 p.m., except for Game 5 in Atlanta, for which coverage will begin prior to first pitch at 8 p.m.

How do you get tickets?

The Braves announced tickets and parking for the World Series to be played at Truist Park will go on sale to the general public on Tuesday, October 26 at 10 a.m. ET. Inventory is extremely limited.

There was a limited pre-sale for "A-list" season ticket members that began Monday. Fans were allowed to buy up to 4 tickets per transaction.

Once tickets are sold out, fans will have to turn to secondary markets. Tickets to Game 3 at Truist Park were starting at $999 on Stub Hub at 1 p.m. on Monday. It cost more than $1,000 to attend Game 4.

Tickets for Game 1 at Minute Maid Park in Houston started at $440 on Stub Hub.

How Braves and Astors made it to the World Series

Atlanta's story is one of ups and downs.

The Braves lost start outfielder Ronald Acuna Jr. to a season-ending knee injury in July didn't climb above a .500 winning percentage until Aug. 8. But Atlanta went 18-8 in August and finished with an 88-73 record, good enough for first in the NL East Division and a trip to the postseason.

Houston finished the regular season 95-67, first in the American League West. Houston played 101 of its 162 games in first place.

The Astros took care of the Chicago White Sox in the ALDS before falling behind 2-1 to the Boston Red Sox in the ALCS. Houston won the last three games of the series, outscoring Boston 23-3 over that stretch of games.

The Braves franchise has won three World Series, but one in Atlanta in 1995. The team last appeared in a World Series in 1999 and last won the title in 1995.

LOOKING BACK AND PAST ATLANTA BRANES WORLD SERIES APPEARANCES

The majority of sportsbooks favor Houston to win the series.

How do the teams match up?

Houston had perhaps the best offensive season of any MLB club in 2021.

Houston boasted Major League Baseball's highest batting average: .267 as a team. Compare that to Atlanta's .244 average, which was 12th in MLB this season. Houston was the only team to reach base in more than one-third of its plate appearances this season.

If you're a fan of advanced statistics, Houston led the league with a 116 wRC+, meaning the Astros created 16% more runs than the league average. Atlanta was just below league-average with a 98 wRC+

When it comes to pitching, both World Series contenders are as close as it gets. Houston's team Earned Run Average was seventh overall during the regular season at 3.78, while Atlanta's was eighth at 3.89.