The last time the Atlanta Braves played in the World Series, the movies people discussed were "The Matrix" and "The Sixth Sense." The band TLC didn't want "No Scrubs." Looming Y2K conspiracies made the world anxious and distrusting of computers.

Someone born the year the Atlanta Braves last played in the World Series has received their driver's license, graduated high school, bought their first alcoholic beverage and earned a college degree. They may have even used that degree to get a job.

It's been a while since the Atlanta Braves were one of the last two Major League Baseball franchises standing, but the city of Atlanta is familiar with the Fall Classic. Both Fulton County Stadium and Turner Field hosted World Series Games when the franchise experienced consistent postseason success in the '90s

Stores re-opened after the final out of the NLCS to sell new merchandise.

The 2021 World Series will be the first hosted in Truist Park, but the Atlanta Braves played in the World Series five times in a span of nine years from 1991 to 1999, including the 1995 championship.

Here's a walk down the memory lane of Atlanta Braves World Series appearances: 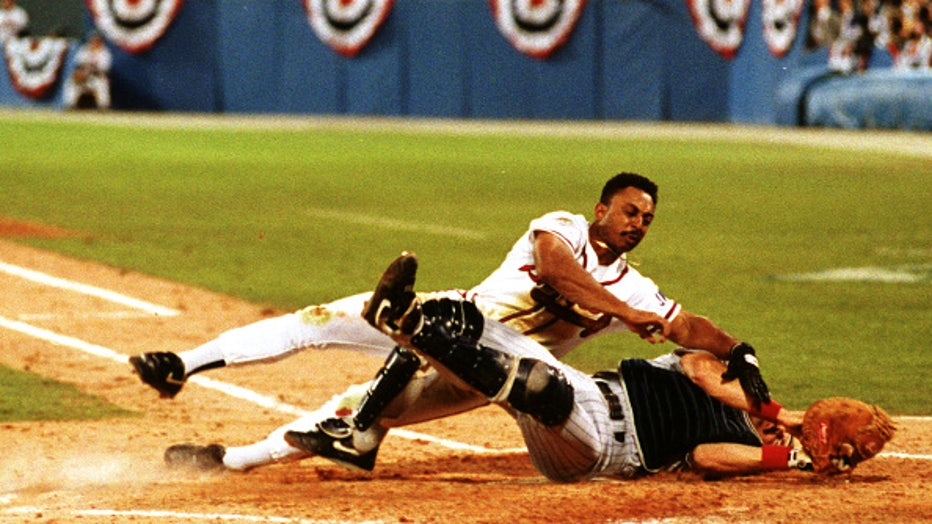 ATLANTA - OCTOBER 22: Lonnie Smith #27 of the Atlanta Braves collides with catcher Brian Harper #12 of the Minnesota Twins at home plate during the 1991 World Series at Fulton County Stadium in Atlanta, Georgia on October 22, 1991. (Photo by Ron Vese (Getty Images)

The Braves professional baseball franchise won World Series as the Boston Beaneaters, Boston Braves and Milwaukee Braves, but the first Fall Classic in Atlanta came in 1991.

The 1991 campaign was the first full season of Bobby Cox's second stint as the Braves' skipper. He remained the franchise's manager for nearly two more decades until his retirement in 2010.

Pitcher Tom Glavine carried the dominance of his 1991 Cy Young Award campaign into the World Series. Glavine pitched 13 ⅓ innings in two starts. He walked seven, struck out eight and was charged with four earned runs.

A 24-year-old John Smoltz was magnificent in two starts. He covered 14 ⅓ innings striking out 11 batters and walking one. He was charged with two earned runs.

The core of the Atlanta Braves legendary pitching rotation was emerging, but the Minnesota Twins had veteran Jack Morris. The 36-year-old future Hall-of-Famer made three starts in the 1991 World Series, including a 10-inning shutout in Game 7. Morris went on to be named the series' MVP.

A new foe with a familiar face 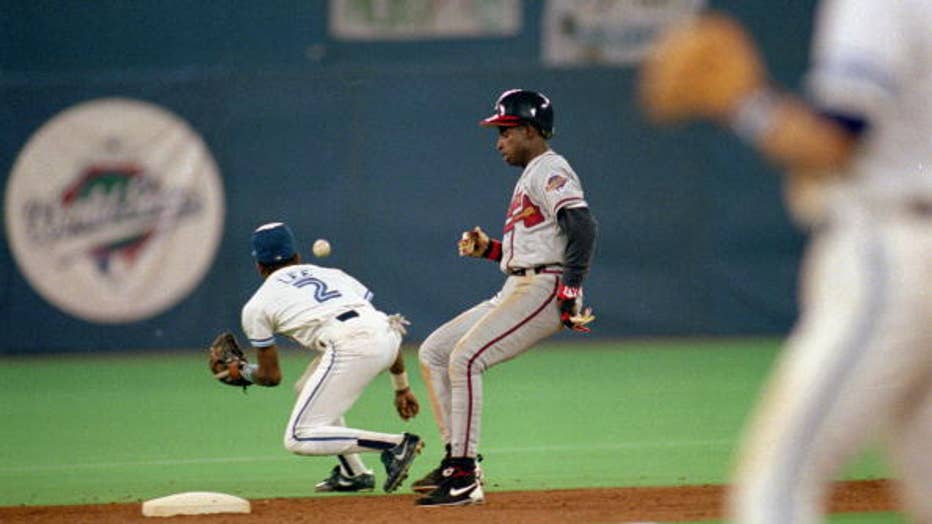 TORONTO - OCTOBER 20: Deion Sanders #24 of the Atlanta Braves gets to second base ahead of the throw during Game three of the 1992 World Series against the Toronto Blue Jays at Skydome on October 20, 1992 in Toronto, Ontario, Canada. The Blue Jays de (Getty Images)

Atlanta found itself back in the World Series the following year, this time facing the Toronto Blue Jays.

Still riding a high off of Sid Bream's National League Championship Series slide that sent Fulton County Stadium into a frenzy, the Braves once again had to face Morris in Game 1 of the World Series. He wasn't quite the bane of Atlanta's championship hopes, as he was the year prior. Glavine out-dueled Morris and Atlanta took a 1-0 lead in the series.

Toronto, however, won the next three games and led 3-1 before Smoltz and Mike Stanton combined to hold Toronto to two runs in Game 5 to send the series back to Atlanta.

The final game of the series was a classic. Atlanta was down to its final out in Game 6 when Otis Nixon tied the game on an RBI single in the bottom of the ninth. Toronto's Dave Winfield doubled in the top of the 11th and drove in two runs to retake the Blue Jays' lead. Atlanta got one of those runs back in the bottom of the frame but Smoltz, who pinch ran for catcher Damon Berryhill, was stranded on third base when Toronto clinched the series. 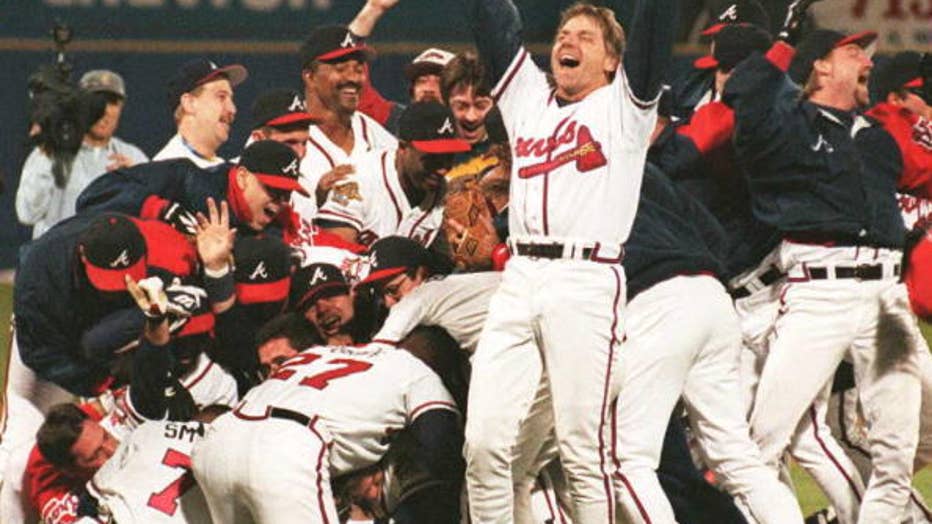 Atlanta won 104 regular-season games and advanced to the NLCS in 1993 but fell short of a third straight World Series berth. The 1994 season was shortened by a strike while Atlanta was second in the National League East. Fans wondered what could have been had their been labor peace between Major League Baseball and the Player's Union.

Then came the historic 1995 season.

Atlanta out-homered Cleveland 8-5 in the series. Ryan Klesko homered in three straight games and Fred McGriff hammered two of his own in the series. 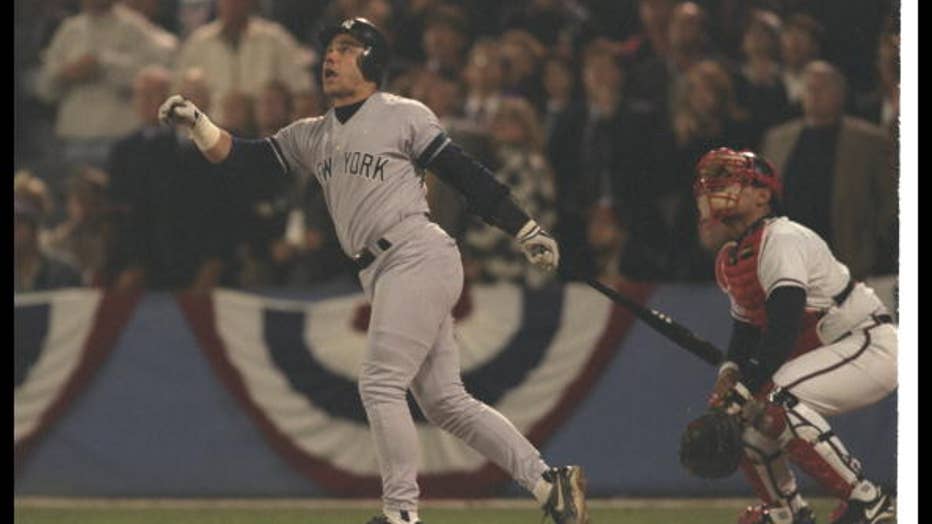 23 Oct 1996: First baseman Jim Leyritz of the New York Yankees watches the ball fly during Game Four of the World Series against the Atlanta Braves at Fulton County Stadium in Atlanta, Georgia. The Yankees won the game, 8-6. (Getty Images)

Atlanta found its way back to the World Series the following year, but never quite grasped the postseason success of the 1995 squad.

Baseball fans had no way of knowing that Atlanta was matched up against a New York Yankees franchise that would go on to win four of the next five World Series.

Atlanta out-scored New York 16-1 in the first two games to take a 2-0 lead in the series before the Yankees rattled off four consecutive wins.

Back in the Bronx 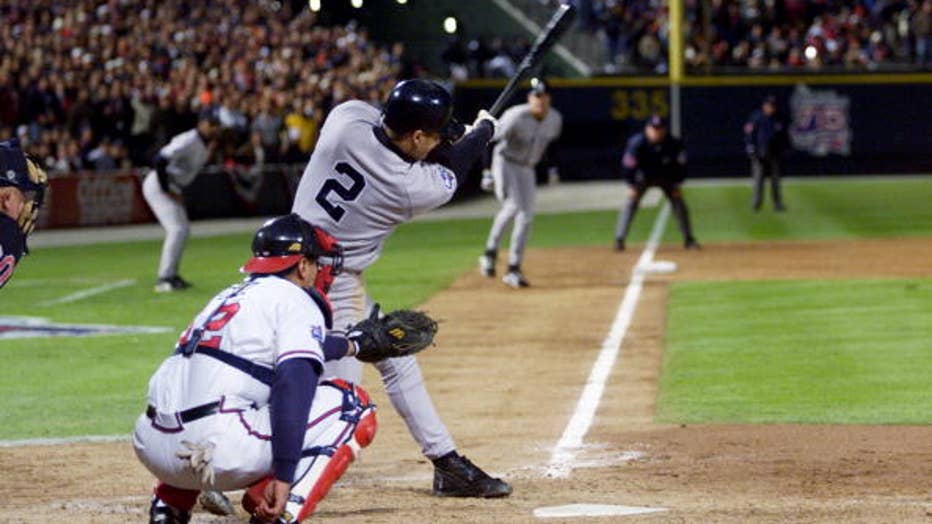 Since the 1996 World Series appearance, the Braves proved to have one of the most consistent franchises in Major League Baseball, winning 101-or-more regular-season games in the following three seasons.

The legendary Braves rotation, though, was out-pitched by the star-studded Yankees rotation that included Roger Clemons and David Cone. New York swept Atlanta and tallied a 2.19 ERA in the series to Atlanta's 4.37.

Atlanta, which appeared in the NLCS or World Series in each of the last eight complete seasons, didn't come that close to a championship for 22 more years.

At the turn of the millennium, the book closed on one Atlanta baseball dynasty. About 13 years later, the first chapters of the next book were written.

Atlanta made the playoffs the four seasons that followed the 1999 World Series, completing a historic streak of 14 division titles.

The franchise posted its first winning season in five years in 2018. Atlanta lost to the National League Champion Los Angeles Dodgers in the National League Division Series, sparking what would become on contentious playoff rivalry between the two clubs.

Atlanta's 2020 NLCS debacle was fresh on the mind of some fans when Atlanta returned home for Game 6 of the 2021 NLCS on Saturday night. Atlanta held a 3-1 lead in the 2020 NLCS, but lost and paved the way for the Dodgers' championship season, which began late during the COVID-19 pandemic.

For the first time in more than two decades, the road to the Commissioner's Trophy passes through Atlanta.