ATLANTA - Eddie Rosario capped a remarkable NL Championship Series with a three-run homer, sending the Atlanta Braves to the World Series for the first time since 1999 with a 4-2 victory over the defending champion Los Angeles Dodgers on Saturday night.

The Braves won the best-of-seven series four games to two, exorcising the demons of last year’s NLCS — when Atlanta squandered 2-0 and 3-1 leads against the Dodgers — and advancing to face the AL champion Astros.

The Braves will be going for their first Series title since 1995, when they beat Cleveland with a team that included Hall of Famers Greg Maddux, Tom Glavine, Jon Smoltz and Chipper Jones — a no-nonsense group that became better known for numerous postseason flops during a momentous run of 14 straight division titles.
This flashy team is led by a far more unlikely hero. 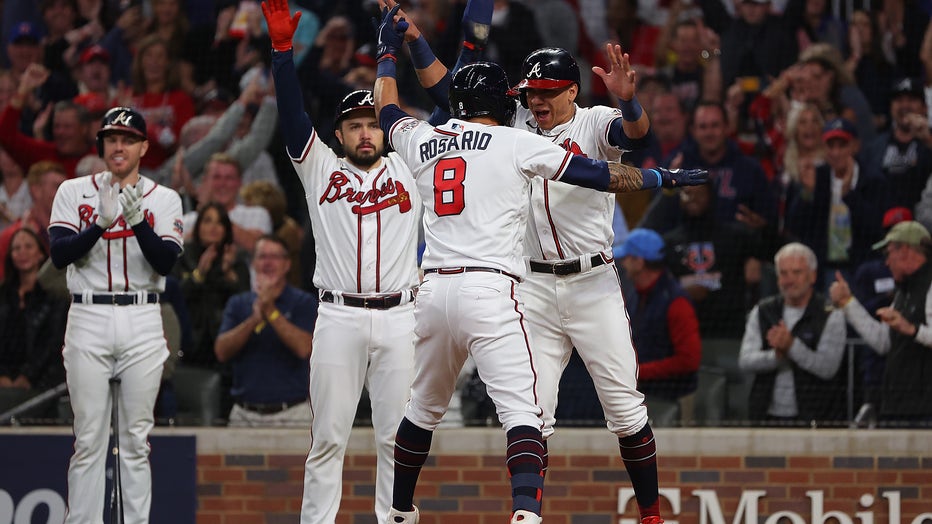 Rosario, acquired in a flush of deals just before the July 30 trade deadline that rebuilt the Braves’ depleted outfield, set an Atlanta franchise record and became only the fifth player in baseball history to record 14 hits in a postseason series.

Will Smith worked a 1-2-3 ninth for his fourth save of the postseason after a brilliant relief stint by winner Tyler Matzek, who escaped a huge jam in the seventh by striking out the side. The left-hander has 11 strikeouts with runners in scoring position in the seventh inning or later this postseason.

Spurred on by chants of "Eddie! Eddie! Eddie" from the raucous sellout crowd of more than 43,000, Rosario finished 14 of 25 (.560) against the Dodgers, with three homers and nine RBIs.

His final hit was certainly the biggest of the 30-year-old Puerto Rican’s career.

With the score tied at 1 in the bottom of the fourth, Rosario came up after pinch-hitter Ehire Adrianza extended the inning with a two-out double into the right-field corner. Slow-running catcher Travis d’Arnaud was held at third by coach Ron Washington, surely aware of who was up next.

Rosario got into an extended duel with Walker Buehler, who stepped up to start on three days’ rest after ace Max Scherzer wasn’t able to go because of a tired arm.
Rosario swung and missed the first two pitches. Then he fouled one off. Then he took a ball. Then he fouled off two more pitches.

Finally, he got one he liked from the Dodgers’ 16-game winner — a cutter that Rosario turned into a 105 mph rocket down the right-field line, higher and higher, straight as an arrow until it landed well back into the seats below the Chop House restaurant.

Rosario knew it was gone, dancing down the line after delivering a 361-foot finishing shot to a highly paid team that won 106 games during the regular season — 18 more than the NL East-winning Braves — but came up short in its bid to become baseball’s first repeat champion since the 2000 New York Yankees won their third straight title.

The Braves will be looking to bury their city’s reputation for playoff misery. From four World Series losses in the 1990s to the NFL Falcons blowing a 28-3 lead in the 2017 Super Bowl, Atlanta again finds itself on cusp of an extremely rare feat.
A championship.

Those ’95 Braves remain the city’s lone team in the four major sports — baseball, football, basketball and hockey — to capture a title. Freddie Freeman said after a Game 5 loss that the city’s history would remain an issue "until we kill that narrative."
They’re four wins from doing just that.

After starter Ian Anderson allowed Cody Bellinger’s run-scoring single in the fourth on his next-to-last hitter of the night, the well-rested Atlanta bullpen took over.
A.J. Minter struck out four in two innings of work. Luke Jackson failed to get an out in the seventh, giving up AJ Pollock’s run-scoring double, but Matzek stranded runners at second and third with three straight strikeouts — the last of them by Mookie Betts on three pitches.

Matzek returned to the mound for a 1-2-3 eighth before handing off to Smith.
The Braves jumped ahead with back-to-back, two-out doubles off Buehler in the first — the second of them by Austin Riley, whose shot down the left-field line one-hopped into the Dodgers bullpen.

With their pitching staff in disarray, the Dodgers scuttled plans to start Scherzer. The right-hander had complained of a dead arm after Game 2, and he was still struggling to bounce back after a workout Friday.

Buehler, who had been projected to go in Game 7 if the series went that far, was bumped up to start for Scherzer on just three days’ rest.

Charlie Morton is set to go against his former team in the opener of the World Series. He memorably came out of the bullpen in Game 7 of the 2017 Series to pitch four innings of two-hit ball, closing out the lone title in Astros history with a 5-1 win over the Dodgers.