NEWNAN, Ga. - Gov. Brian Kemp and other state officials on Saturday surveyed the wreckage left in the wake of an EF-4 tornado that tore through Coweta County and other areas of Georgia this week.

The level of damage is uncommon, Kemp said as someone who's responded to several severe storms during his tenure as Georgia's governor.

"It is a lot different from anything I've ever seen," Kemp said.

Kemp spoke briefly with news outlets at Newnan High School after seeing the damage, mostly to assure locals that state agencies were going to see through the cleanup efforts in Newnan and across Coweta County. 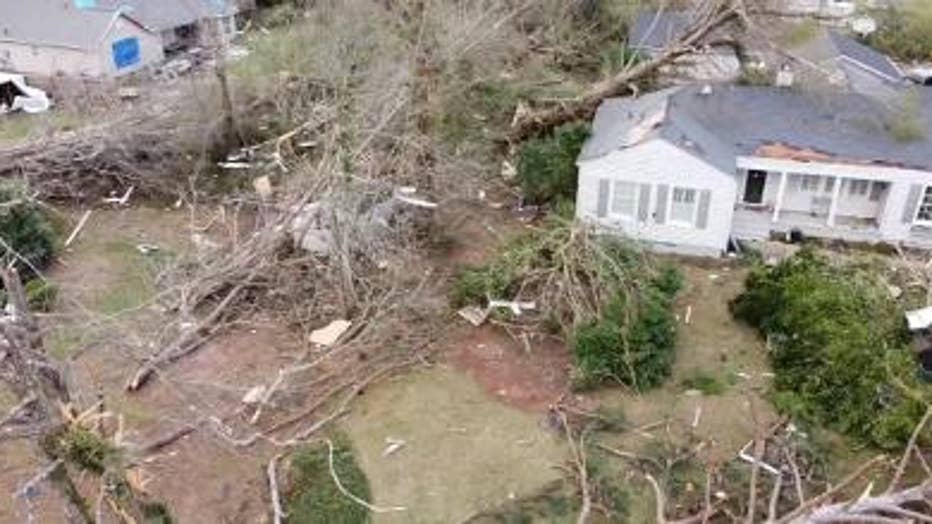 Chris Stallings, Georgia Emergency Management and Homeland Security Agency Director, said his organization's resources and other state assets will continue to assist in recovery efforts in the area.

Stallings gave kudos to local first responders and emergency services. He said GEMA's response is ongoing and is a collaboration of state agencies including the Georgia Department of Transportation, Georgia State Patrol and Department of Natural Resources.

"We're going to be here as long as we need to," Kemp said.

Kemp offered condolences to the community of Newnan and those across the south affected by the storm, which officials confirmed killed at least one person in Georgia. Kemp said state agencies will contribute resources to help the community rebuild.

"I have great hope and optimism from the people over here today they're not going to cry over spilled milk, knocked down trees or damaged homes," Kemp said. "They're going to pull their bootstraps up."

Georgia tornados: How to help

Kemp remarked on the encouraging number of volunteers he saw on his way to Newnan High School providing toiletries and water bottles.

More: How to help tornado victims in Georgia

He recommended people wanting to help Newnan storm victims to donate through a verified organization such as the American Red Cross and Coweta County officials. Kemp warned of fraudulent people attempting to take advantage and seize donations.

Officials recommended those wanting to help donate to trusted, well-known organizations such as local churches, city or county offices, the Salvation Army and the Red Cross.

Georgia Department of Insurance and Fire Safety Commissioner John King encouraged locals helping the community cleanup to hire professionals to dangerous work like cutting trees. King warned locals to be wary of potentially fraudulent, unauthorized workers who are qualified to do work. He said people should check with city and county officials to verify companies and workers are authorized.

"I asked people to be mindful who we engage to do repairs and make sure they don't revictimize," King said. "This community has suffered enough."

District 3 Rep. Drew Ferguson, R-Ga., said the community has been resilient in the days after the storm and will build it back.

"What y'all have seen here is unprecedented," Ferguson said.

Newnan was not the only community affected by this week's severe weather.

Communities across Alabama and other parts of Georgia are dealing with damage to homes and buildings from possible tornadoes.

Officials in parts of Tennessee, Kentucky and the Carolinas warned of flooding.

The storm forced schools in Polk, Heard, and Floyd counties as well as Rome City Schools to close and forced Gordon and Calhoun City Schools to delay starting their day by several hours.