NEWNAN, Ga. - A tornado swept through Newnan overnight, leaving behind major damage for residents to clean up Friday morning.

National Weather Service officials later confirmed survey results showed that the tornado was an EF-4 with wind speeds up to 170 mph. The survey focused on the hard hit areas near LaGrange Street and Smokey Road.

Newnan police asked residents to "get off the roads" in a Facebook post, explaining that emergency officials were surveying the area. Newnan Utilities said the storm knocked out its phone and internet services but that they were "fully aware of downed lines, gas leaks and many impassable roads."

Aerials of the destruction from a tornado that swept through the town of Newnan in the overnight hours. The storm brought down trees and power lines, destroyed homes, and killed one person while leaving several people injured.

In a tweet, officials said that the city experienced heavy damage around its historic downtown area and that crews are working to clear the roads and restore power to the affected areas.

Sitting in the dark in front of Newnan High School on LaGrange Street, residents told FOX 5 they heard the tornado sirens warnings go off and ran for cover.

"I was shaken even. I was scared," Newnan resident Heather Raider said. She and her two children were at home when they heard the sirens. She grabbed her daughter and son and went into the bathroom for shelter. 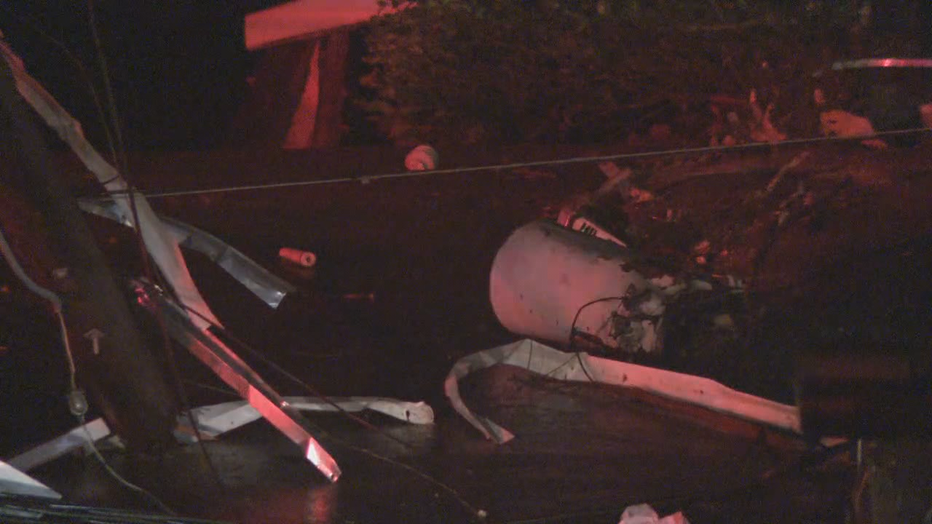 "The tornado came through. We could feel it shaking the house and everything, and I could feel the rain coming down on me," she said.

When Raider was able to get out of the bathroom, she found the rest of the home destroyed. A few neighbors were able to help get her and her children out of the home safely.

State troopers told FOX 5 one man has died from a heart attack during the storm and that there are many other injuries due to the weather.

Due to the damage, Coweta County Schools have canceled all in-person and virtual classes for Friday.

The storm was part of an early spring "super cell" storm system that tore across the Deep South and moved into Georgia late Thursday night. At least five people have been reported to have died in connection with the weather event.