Troops from Fort Stewart flew out of Hunter Army Airfield in Savannah. Nearly 200 troops from the Third Infantry Division geared up and shipped out.

Troops from Fort Stewart took off from Hunter Army Airfield in Savannah for a deployment expected to last at least six months.

One by one the soldiers from Fort Stewart answered the call to defend their country.

Nearly 200 troops from the 3rd Infantry Division geared up to deploy to Germany in the wake of the conflict.

Major General Charles Costanza said this is the shortest amount of time given to soldiers at Fort Steward to gear up and ship out.

"I’ve been in the army for 30 years and I don’t ever remember us doing this," Major General Costanza said.

He makes it a personal mission to shake each and every hand as the brave men and women boarded the plane.

"It’s emotional. Especially for the younger soldiers. You can see in their eyes it’s the first time they’ve deployed," Costanza said.

For Captain Troy Makulec, this marks his second deployment.

"I joined the army because it was the right thing to do. I felt a call and I wanted to do everything I could to support my country," Makulec said.

However, for Riccora Jones, works inside the tank and operates the gun, this will be her first time being deployed. 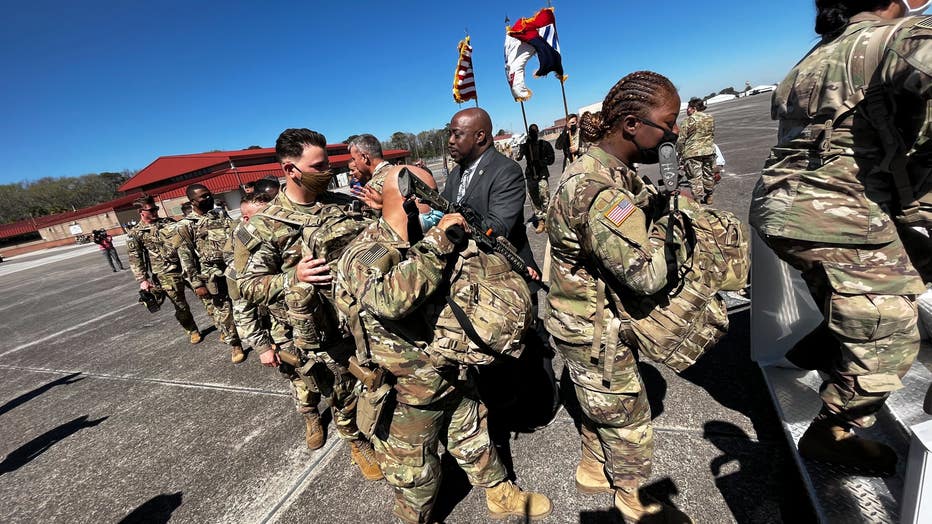 Soldiers from the 3rd Infantry Division prepare for deployment to Germany on March 2, 2022.

"I'm excited," Jones said. "We have about 5-6 females in the company and a bunch of males but we get the job done."

For Marissa And Michael Elizardo—they will have love to carry with them.

The two married in September and are shipping out together. They don’t just love each other-but their country.

"I think it’s just putting people's needs above your own," Marissa Elizardo said

As each soldier takes the walk up the stairs and into the plane.

They might not know what’s ahead of them. But they know they will be with their new family.