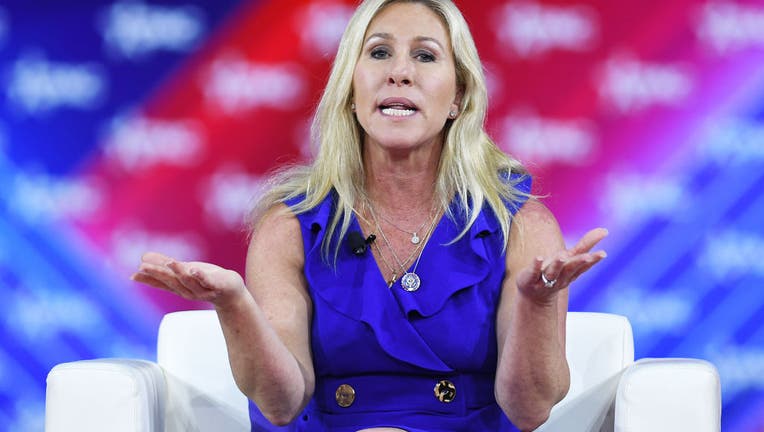 WASHINGTON, D.C. - Republican leaders in Congress are torn over what to do with Rep. Marjorie Taylor Greene after the congresswoman spoke at a weekend event organized by a white nationalist who marveled over Russia’s invasion of Ukraine as the crowd erupted in chants of "Putin!"

Yet it’s unclear whether Greene will face any further reprimand or rebuke for what is now an ongoing pattern of startling behavior. McCarthy had previously suggested the Georgia congresswoman, who is now barred by Democrats from committees, would enjoy a promotion if Republicans take control of the House.

It all shows the difficulty Republican leaders have combating the party’s drift toward Trump-style authoritarianism and embracing right-wing extremism.

"This may be a chance to burn out the cancer of the Republican Party — those that are, you know, Putin sympathetic," said Rep. Adam Kinzinger, R-Ill., a former military pilot who broke with his party over the Trump presidency.

But he worries that McCarthy and other GOP leaders will stop short of kicking Greene out of the party. "He won’t because she has power, let’s be honest, but I’m embarrassed by it."

The scrutiny over the congresswoman, who remains an outlier on Capitol Hill, comes as most of Congress is largely unified in its condemnation of Russian President Vladimir Putin and its support of Ukraine. Ahead of President Joe Biden’s first State of the Union address, the invasion has proven to be a rare moment of common ground amid Democrats and Republicans as the U.S. defends the Western-style democracy.

This is not the first time Greene, of Georgia, has broken the norms of political behavior by associating with extremist groups, espousing conspiracy theories or musing about violence against politicians she disagrees with. Shortly after taking off in 2021, the House voted to strip the new lawmaker of committee assignments over her views and actions, in a largely party-line vote.

"For me, it was appalling and wrong," McCarthy told reporters at the Capitol late Monday.

Asked to elaborate Tuesday as cameras were rolling during a press conference at the Capitol, McCarthy demurred, declining further response, as other Republican leaders and lawmakers stood by. "There’s no place in our party for any of this," he had said.

McConnell offered no public comments, but said in a statement from his office: ’There’s no place in the Republican Party for white supremacists or anti-Semitism."

Greene defended her appearance at the America First Political Action Committee event, saying she will continue sharing her message to "every corner" of the U.S. She has said she did not personally know the organizer or his beliefs, and participated so she could speak to the large crowd.

But the organization is not unfamiliar to Greene or several other Republicans in Congress including Rep. Matt Gaetz, R-Fla., who has said they had briefly considered forming an America First Caucus in Congress. Another, Rep. Paul Gosar, R-Ariz., who has also spoken to the group.

The America First Political Action Committee was launched by Nick Fuentes, who is considered by anti-hate groups as a white nationalist. He grew to prominence after the 2017 neo-Nazi march in Charlottesville that brought the far-right’s enthusiasm for Donald Trump into the streets during the first year of his presidency.

Greene kicked off the group’s weekend conference in Florida, which was billed as a far-right alternative to the more established Conservative Political Action Conference that drew Trump and other GOP elected officials to Orlando over the weekend.

The congresswoman was welcomed to the stage after Fuentes led the crowd of mostly white men into a rousing embrace of Russia, marveling at its show of strength invading Ukraine.

"Can we get a round of applause for Russia?" he asked. The crowd chanted "Putin! Putin!"

Fuentes said more than 1,000 had gathered for his event, the third and biggest so far, and that the "secret sauce" of the organization’s strength was "these young white men." He mocked the Democrats’ mantra that diversity is a strength.

Fallout has been mixed. On Tuesday, Republican U.S. Sen. candidate Herschel Walker dropped plans to attend a "Shall Not Be Infringed" rally for gun rights that Greene is set to host this upcoming weekend in Rome, Georgia.

Walker no longer plans to speak at the rally, spokesperson Mallory Blount told The Associated Press on Tuesday, without giving a reason.

But David Perdue, who the former Republican senator who Trump is backing in a primary challenge to incumbent Gov. Brian Kemp, still plans to attend.

"Perdue has also been clear that Putin is a murderer and a thug who has been enabled by Biden’s weakness and must be stopped," said spokesperson Jenni Sweat.

Another Republican Senate candidate, Gary Black, the agricultural commissioner, said in a Tuesday statement that Greene’s ideas and judgement "are a poison in the bloodstream of our party."

While McCarthy said he would be meeting with Greene, other Republicans were stepping in to offer their own views.

Asked if Greene or the others should be kicked out of the GOP, Sen. Mitt Romney of Utah, once the party’s presidential nominee, said: "They should be laughed out."

Associated Press writer Jeff Amy in Atlanta and Alan Fram in Washington contributed to this report.