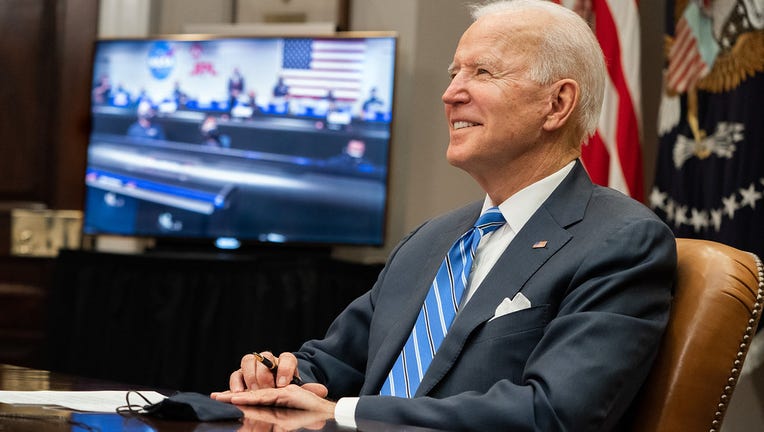 Speaking to ESPN, Biden responded to comments by MLB Players Association Executive Director Tony Clark, who told the Boston Globe last week that he "looked forward to discussing" moving the game as a response to the Republican-backed election reform.

"I think that today's professional athletes are acting incredibly responsibly. I would strongly support them doing that," Biden responded. "People look to them, they're leaders. Look at what's happened with the NBA as well. Look at what's happened across the board. The people who've been victimized the most are the people who are the leaders in these various sports and it's just not right."

The president had previously called the bill "Jim Crow in the 21st Century. "

"Imagine passing a law saying you cannot provide water or food for someone standing in line to vote, can't do that? C'mon!" the president exclaimed. "Or you're going to close a polling place at 5 o'clock when working people just get off? This is all about keeping working folks and ordinary folks that I grew up with from being able to vote."

The new law adds a photo ID requirement for voting absentee by mail, cuts the amount of time people have to request an absentee ballot and limits where drop boxes can be placed and when they can be accessed. It also bans people from handing out food or water to voters waiting in line and allows the Republican-controlled State Election Board to remove and replace county election officials while curtailing the power of the secretary of state as Georgia’s chief elections officer.

Republicans insist the changes are needed to restore voters’ confidence.

Civil rights groups have filed federal lawsuits seeking to overturn the Georgia law. They’ve otherwise turned their focus to Washington, where Democrats are pushing a comprehensive federal overhaul of election law that could effectively override many changes being enacted in Georgia and considered elsewhere.

Gov. Brian Kemp responded to criticism of the bill with an opinion piece on FOX NEWS Wednesday, arguing that Biden's rhetoric was "disingenuous and completely false."

As a response to calls to move the All-star game, Cobb County Chairwoman Lisa Cupid asked players not to lobby to move or boycott the mid-July showcase because of the negative economic impact on the county. Cupid said the recent law does not reflect the interests of local elected officials.

"I recognize that some do not want to play baseball here in Cobb County because our state legislators have not played fair," Cupid said. "And I agree. Time and time again, we have proven the integrity of our 2020 elections. Still, some choose to create a solution to a problem that did not exist."