A diverse crowd gathered outside the Georgia state Capitol Saturday to demand justice for the victims of the March 16 shootings at massage businesses.

ATLANTA - Thousands of people across the world have donated millions of dollars to the families of multiple victims of the deadly Atlanta-area spa shootings.

According to the website GoFundMe, there are six verified fundraising campaigns to help raise money for the victims' funerals and their families' living expenses as they go through a period of mourning.

The shootings at the two massage parlors in Atlanta and one in Cherokee County Tuesday evening left eight people dead, many of them women of Asian descent, authorities said.

If you would like to donate to the families of the victims, here is a list of the verified fundraisers on GoFundMe.

Robert Peterson, the youngest son of Yong Yue, created a GoFundMe for his mother's memorial on Sunday.

Peterson said his mother was an amazing woman who would make home-cooked Korean food and loved Korean karaoke.

"Will miss joining mom on her weekly Sunday routine to the grocery store and traditional Korean dinner,"  Peterson said. "She was always kind-hearted and willing to help everyone she encountered."

Brittany Alshaibani, the manager at Tucker's Juicy Crab, was a coworker of Paul Andre Michel's wife and started a GoFundMe to help her after hearing the shocking news.

"I feel terribly bad for her and cant get her off my mind, and thought how could I be a help to her and her family, so as you guys know it's very expensive to bury a loved one, so if anyone is willing to help, it would be greatly appreciated," Alshaibani said.

She said that Bonnie and Paul had been married for 30 years. 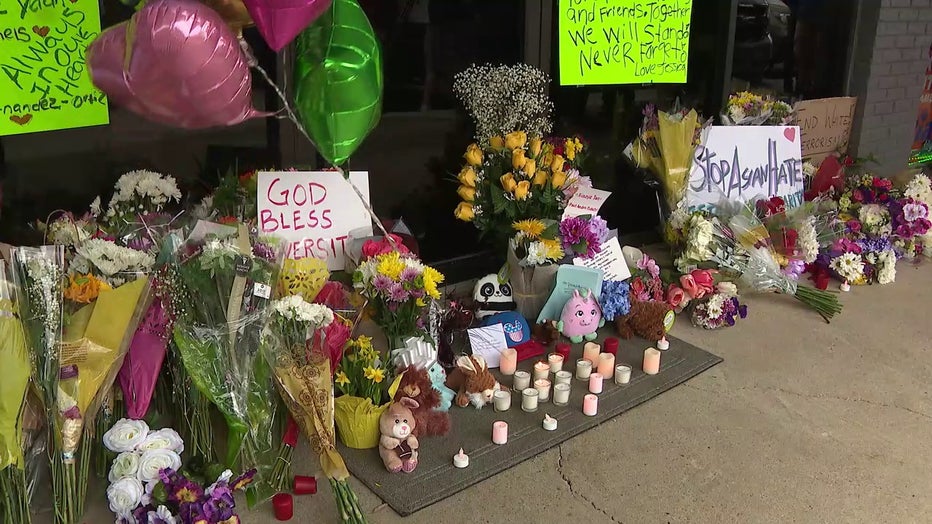 Loved ones told FOX 5 Yaun and her husband were first-time customers at Youngs Asian Massage when the shooting happened and that they were devastated over her death.

The GoFundMe, started by Amy Cinkaj, will raise money for Yaun's funeral expenses.

According to Cinkaj, Yaun had two "beautiful babies she is leaving behind."

"We just don't know how to do any of this alone. If you can find it in your heart to donate, our family will certainly appreciate all of your support," she said.

The family of 69-year-old Sun Cha Kim is raising money to give her a memorial and funeral.

One of Kim's grandchildren said on the fundraiser that all her grandmother wanted was to grow old and watch her children "live the life she never got to live" as an immigrant from South Korea.

According to the grandchild, Kim would call her once a week to say "Stay strong in life... when you’re happy, I’m happy."

"She was pure-hearted and the most selfless woman I knew. She represented everything I wanted to be as a woman, without an ounce of hate or bitterness in her heart," they said. "People that were close to me, knew that my grandmother was my rock."

Video from inside spa where shooting happened

A witness who took video from inside a spa targeted by a gunman said he was scared for his life.

A GoFundMe account set up by the two sons of 51-year-old Hyun Jung Grant, whose maiden name is Kim, has far surpassed its original goal of $20,000. As of Monday, the account more than $2 million.

One of Grant's sons, 22-year-old Randy Park, told the Associated Press his mother loved disco and club music, often strutting or moonwalking while doing household chores and jamming with her sons to tunes blasting in the car.

Park said he didn't "know how any word I write here will ever convey how grateful and blessed I am to receive this much support."

"And to those of you that have donated any amount of money. To put it bluntly, I can't believe you guys exist. People I will probably never meet, hear, nor express my thanks to."

Hernandez-Ortiz's wife set up a GoFundMe for her husband, the only survivor of the shooting, to pay for his medical bills.

Flora Gonzalez Gomez says that her husband is still in intensive care at the hospital and that he will need facial surgery.

"He was shot in the forehead down to his lungs and into his stomach," she said.

Gonzalez Gomez asked to prayers for her family and all the other families affected by the shooting.

As of Monday, the other victims do not have verified GoFundMe pages.

Robert Aaron Long, a 21-year-old white man, is accused of killing four people inside two Atlanta spas and four others at a massage business about 30 miles away in suburban Cherokee County.

Officials said Long confessed to the murders and told Cherokee County Sheriff's Office investigators he has a "sex addiction" and the attack was not racially motivated.

Police have said they’re still working to establish a motive, including looking into whether the attacks can be classified as hate crimes.

Georgia lawmakers last year passed a hate crimes law allowing additional penalties for certain offenses when motivated by a victim’s race, color, religion, national origin, sex, sexual orientation, gender or disability. A hate crime is not a standalone crime under Georgia law, but can be used to add time to a sentence of someone convicted of another crime.