In this age of COVID-19 protocols and virtual press conferences, Georgia Football head coach Kirby Smart went before a microphone in Indianapolis just minutes after landing to talk about the upcoming College Football Championship.

ATLANTA - Another installment in the epic rivalry between the Georgia Bulldogs and Alabama Crimson Tide is set for Monday night in Indianapolis, and the stakes are as high as can be.

Georgia Bulldogs football fans perhaps don't need a reminder that Alabama has the recent edge in the rivalry. The Georgia Bulldogs are in the midst of the football team's longest historic losing streak to Alabama, dating back to September 2008.

GEORGIA VS ALABAMA NATIONAL CHAMPIONSHIP GAME: WHAT YOU NEED TO KNOW

This matchup might feel different for Georgia football fans, though, since the Bulldogs are favored by some sportsbooks to win the National Championship.

The Georgia Bulldogs are 25-42-4 against the Alabama Crimson Tide all-time. Here's a look back at eras of matchups between Alabama and Georgia:

Georgia won the first-ever recorded meeting between the two teams, 35-0. There are four ties between Georgia and Alabama in 71 total matchups; three of those ties came in the first seven recorded games between the teams.

BEFORE THEY WERE BULLDOGS, THEY WERE HIGH 5 SPORTS STARS

The 1910s saw the Bulldogs' longest-ever winning streak against the Crimson Tide.

UGA gets send off to College Football Championship

Georgia Football players got a big sendoff in Athens on Friday as they headed to Indianapolis to take on Alabama in the College Football Championship on Monday.

In the final decade-or-so before the formation of the Southeastern Conference, Alabama out-scored Georgia 177-66.

Georgia lost five straight games from 1922 to 1926. The Crimson Tide shut out the Bulldogs in three of those games.

Alabama is recognized as college football national champions in 1925 and 1926. It was the first Crimson Tide dynasty, so to speak.

The first two meetings between the Georgia and Alabama football teams as members of the newly-formed Southeastern Conference when in favor of Alabama.

Former Georgia TE Pat Hodgson recalls arguably UGA's biggest win over Alabama from 1965 and one of the biggest (and most disputed) plays in the storied rivalry.

Georgia was the only team to beat Alabama during its 1965 National Championship season. That season the Bulldogs were led by their own legendary head coach: Vince Dooley. It was Dooley's second season as Georgia's head football coach.

GEORGIA VS. ALABAMA: ONE OF THE BEST AND MOST DISPUTED GAMES BETWEEN RIVALS

Georgia and Alabama didn't meet on the gridiron for seven years after the 1965 season.

The Bulldogs went 1-3 against Alabama in the '70s before the rivalry went on hiatus again.

In 1980, the Dooley-led Bulldogs were declared National Champions. Georgia hasn't finished a season on top of the college football universe since that season.

Georgia and Alabama faced each other twice in the '80s, slitting the series.

Alabama and Georgia each saw multiple coaching changes beginning in the late '80s and through the 90s.

Georgia finished the season ranked in the Associated Press top 25 seven times during that span, but the Bulldogs' highest finish was No. 8 in 1992.

That year, Alabama ran the table and finished with another national championship. It would be 17 years before the Crimson Tide would win their next one.

Georgia bests Alabama at the turn of the millennium

Alabama's superiority over Georgia in college football didn't always seem like a guarantee.

Georgia won its first three meetings against the Southeastern Conference foe under Head Coach Mark Richt. Georgia's first two wins over Alabama in the 2000s were prior to Head Coach Nick Saban's arrival in Tuscaloosa. Richt's Bulldogs matched up against Mike Shula's Crimson Tide and swept a home-and-away series between the two programs: 27-25 in 2002 and 37-23 in 2003.

The first meeting between Richt's Bulldogs and Nick Saban's was a 26-23 overtime win for Georgia in Tuscaloosa in 2007, Saban's first season as head coach of the Alabama Crimson Tide. Georgia lost to Alabama in Athens the following year. That loss was the beginning of Alabama's current seven-game winning streak vs. Georgia. 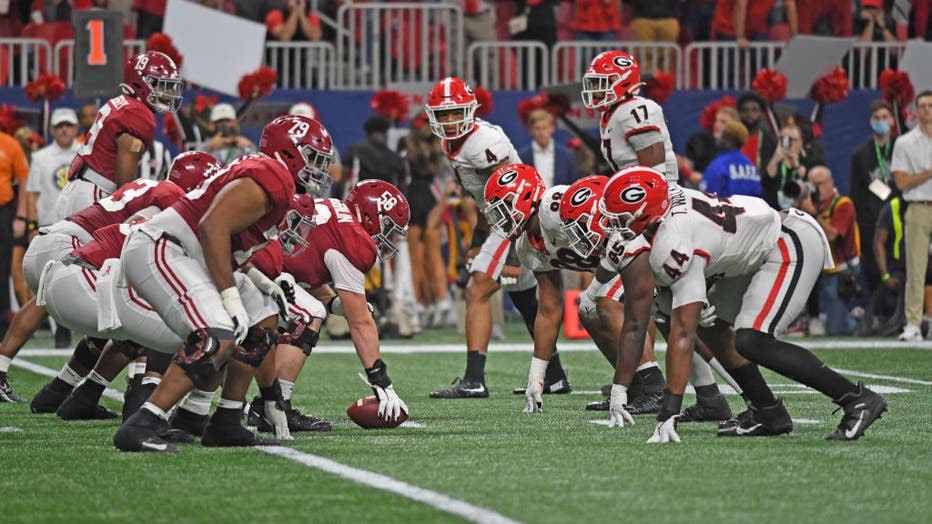 The pain of the 2018 College Football Playoff National Championship game is perhaps fresher to Georgia Bulldogs football fans than the team's most recent defeat in the 2021 Southeastern Conference Championship.

Four of the last seven games between the teams have been at "neutral" sites — all four games were held in Atlanta's Mercedes-Benz Stadium or the Georgia Dome.

Georgia lost the 2012 SEC Championship game on a snap from the red zone with time expiring. Georgia led in the fourth quarter but Alabama quarterback A.J. McCarron led the Crimson Tide on a go-ahead scoring drive that left Georgia with 3:15 to score, needing a touchdown. Alabama went on to beat Notre Dame in the BCS National Championship game. Georgia won the Capital One Bowl over Nebraska.