Georgia Bulldogs are undefeated no more. The team lost to rivals the Alabama Crimson Tide 41-24 in the SEC Championship at Mercedes-Benz Stadium in Atlanta.

ATLANTA - The No. 4 Alabama Crimson Tide managed to upset the No. 1 ranked Georgia Bulldogs for the SEC Championship, handing Georgia its only loss of the regular season.

The Tide defeated the Bulldogs 41-24 on Saturday, a result that likely sends both powerhouse programs to the four-team College Football Playoff.

Bryce Young stunningly carved up the nation’s top-rated defense, giving Nick Saban and Alabama a shot at another national championship. Young threw for three touchdowns and ran for another.

Georgia (12-1, No. 1 CFP) cruised through the regular season, barely challenged and a unanimous choice as the nation’s No. 1 team for the past two months. The Bulldogs boasted a fearsome defensive unit that had allowed only 6.9 points a game.

Young made them look like a scout team, surely bolstering his Heisman Trophy chances as well as moving on to an even bigger game on the final day of 2021. 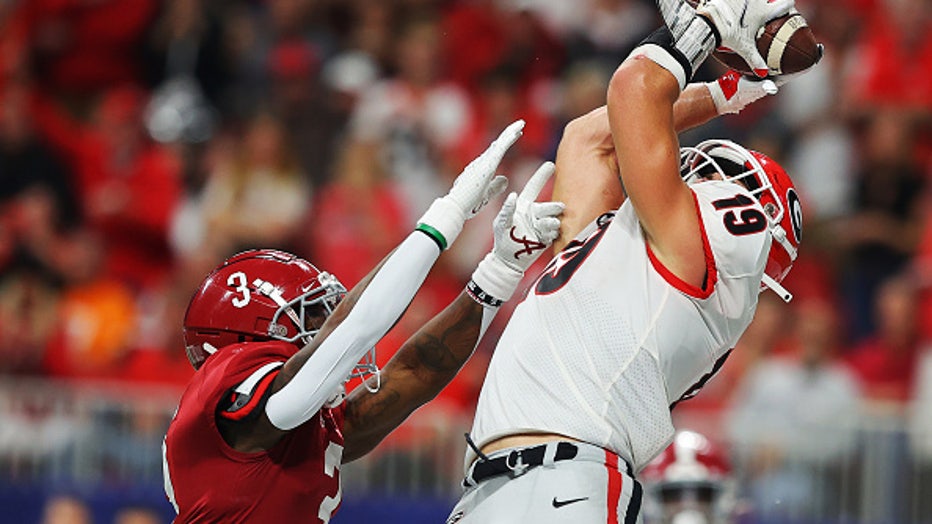 ATLANTA, GEORGIA - DECEMBER 04: Brock Bowers #19 of the Georgia Bulldogs can't hold on to this touchdown reception against the Alabama Crimson Tide during the third quarter of the SEC Championship game against the at Mercedes-Benz Stadium on December

The playoff field will be announced Sunday, with the semifinals set for the Orange and Cotton bowls on Dec. 31.

Alabama (12-1, No. 3 CFP) had six offensive scoring drives — five covering at least 75 yards, the other 62 — and finished with a staggering 536 yards against a team that was giving up just under 231 per game.

Overall, Alabama has now won seven in a row against the Bulldogs since 2007.

Depending on the playoff seedings, the SEC behemoths could be headed for a rematch in the semifinals. It would be the second time the league has placed two teams in the playoff, the other coming in 2017.