Local high school football player Landon Hagwood is battling cancer. Despite undergoing treatment he's found a way to give back to those in need. His actions are being recognized with a scholarship and tickets to the SEC championship game.

OCONEE COUNTY, Ga. - An Oconee County high school football player is fighting a tough battle off the field and helping others at the same time.

Landon Hagwood is a senior at Oconee County High School and member of the football team. He's been battling Ewing's sarcoma for the past two years. It's a type of tumor that forms in bone or soft tissue.

But his cancer battle hasn't stopped Landon from giving back.

During his treatments, Landon discovered a lack of clothes for kids his age at hospitals, so he's made it his mission to collect pajamas for Children's Healthcare of Atlanta. So far, he's collected more than 400 pairs of pajamas through community drives. 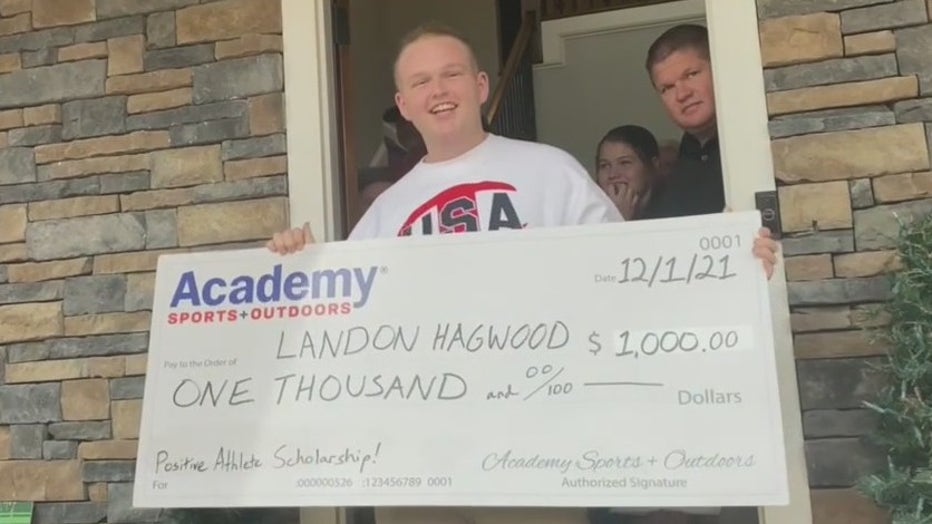 Landon Hagwood, a senior and football player at Oconee High, who has cancer, gifted a $1,000 scholarship and SEC Championship tickets by Positive Athlete and Academy Sports + Outdoors.

That motivation and selflessness has been recognized by an organization called Positive Athlete who, in partnership with Academy Sports and Outdoors, surprised Landon with a $1,000 scholarship and four tickets to the SEC Championship game between Georgia and Alabama.

"This is definitely like the best thing that's happened this year so far for me. I'm a huge Georgia fan, I'm just crossing my fingers that the dogs get a win."