Breaking down the Atlanta Falcons' 2021 schedule

The first season with GM Terry Fontenot and head coach Arthur Smith at the helm begins on FOX, the preseason home of the Atlanta Falcons.

ATLANTA - The schedule is officially set in stone for the Atlanta Falcons' first season with head coach Arthur Smith and general manager Terry Fontenot at the helm.

The preseason begins on FOX with Smith going up against his former team, the Tennessee Titans. That game will kick off at 7 p.m. from Mercedes-Benz Stadium on Aug. 13.

The following week, the Falcons' second preseason game is at Miami at 7 p.m. Aug. 21, also on FOX.

The Falcons will play host to the Browns on Aug. 29 for the third and final preseason game of 2021. 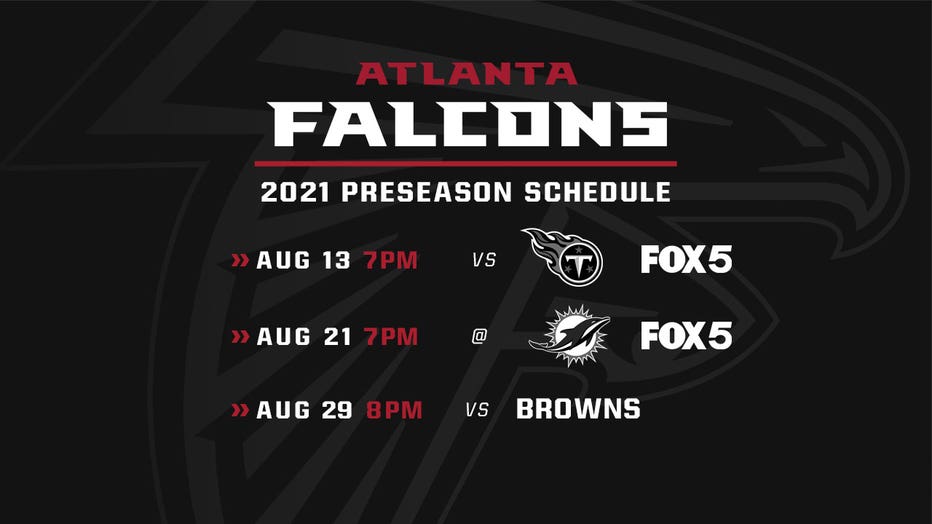 Atlanta's regular season begins at home against the Philadelphia Eagles on Sept. 12 at 1 p.m. on FOX as well. FOX 5 Atlanta will broadcast 15 of the Falcons' 17 regular-season contests.

RELATED: Falcons to face Eagles in 2021 season opener on FOX

Breaking down the Atlanta Falcons' 2021 schedule

The 2021 regular season is the NFL's first with 17 games, and all NFC teams received a ninth regular-season road game this season. One of those games for the Falcons will be played at London's Tottenham Hotspur Stadium as part of the NFL's International Series.

In addition to that contest, Atlanta will host two preseason games and seven regular-season games at Mercedes-Benz Stadium in 2021. Officials have previously announced that they expect to welcome back fans this fall at full stadium capacity.

"Home openers to start the season are always, I feel like, to our advantage – better than being on the road, so it'll be good to open up hopefully in front of a big crowd if the situation allows. But it should be a lot of fun," Falcons defensive back Isaiah Oliver told FOX 5 Sports. "We've played the Eagles, what, twice in the last three years? So it's an opponent we know well, and they know us well, so it's always a good game against the Eagles."

Atlanta's 2021 season opener against Philadelphia will be the 33rd time the Falcons and Eagles clash, with Philly owning the all-time series record, 17-14-1.

The only primetime game for Atlanta is on Thursday, Nov. 18, on FOX 5 against New England. The last time the Falcons and Patriots played was 2017. This season, rookie Mac Jones or Cam Newton will be the starting quarterback for New England. 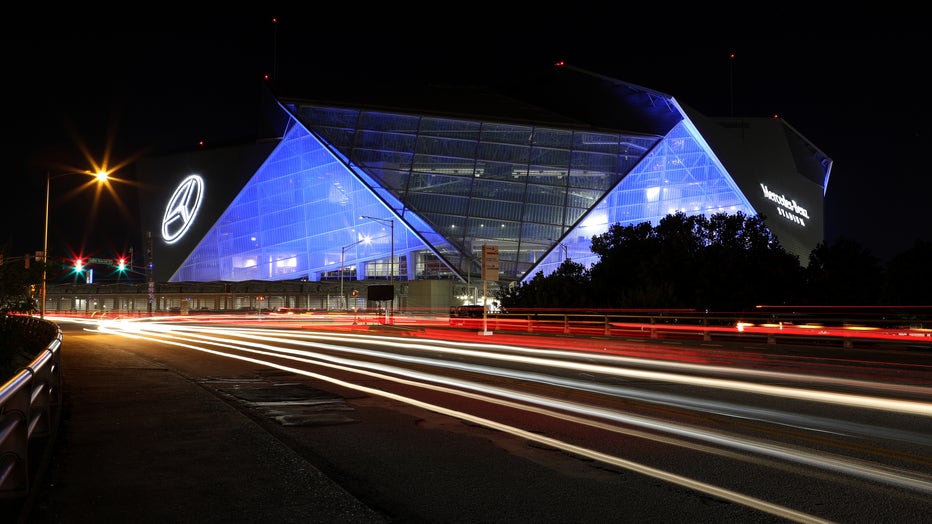 Atlanta's game across the pond against the Jets will be just the franchise's second international regular-season contest. The Falcons also hosted the Lions at Wembley Stadium in 2014.

"I'm looking forward to making another trip over there. It was a lot of fun the last time. The outcome wasn't as much fun as I would've liked it to be, but hopefully we can right that ship this go-around," Falcons long snapper Josh Harris told FOX 5 Sports. "Just being able to experience that culture, go over there and interact with their fans, and really just see how excited the world is about the NFL product and to be able to perform in front of them. What's really cool is, as a specialist involved in a lot of kicking, one thing I took away from our first trip was how excited everybody got when the ball was kicked. I guess it's as close as it can be to soccer. Whether it's an extra point or kickoff, there was just a lot of excitement in the stadium."

The Falcons were originally slated to make a trip to London to play the Broncos in 2020, but due to the COVID-19 pandemic, that game was moved to Mercedes-Benz Stadium.

Team officials say surrounding access for season ticket members at the London game are still being finalized with more information being sent to members in the coming months.