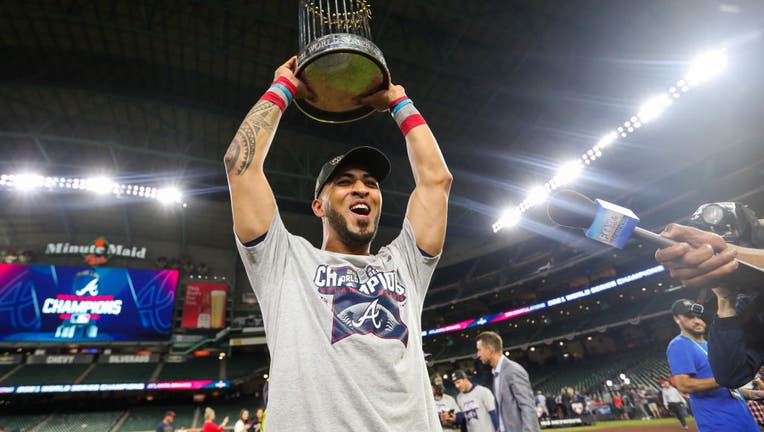 HOUSTON, TX - NOVEMBER 02: Eddie Rosario #8 of the Atlanta Braves hoists the commissioners trophy after his teams 7-0 victory against the Houston Astros in Game Six to win the 2021 World Series at Minute Maid Park on November 02, 2021 in Houston, Tex

ATLANTA - The Atlanta Braves addressed holes in the team's outfield by bringing back one of the heroes of the 2021 Postseason and World Series championship run.

The Braves announced the team re-signed outfielder Eddie Rosario. The contract guarantees Rosario $18 million over two years with a club option in 2024.

The move is one of several the Braves have made to shore up the roster after the MLB lockout was lifted and before the first Spring Training games on Thursday.

On Monday, the club announced it was sending four prospects to the Oakland Athletics for first baseman Matt Olson. On Tuesday, the Braves signed the slugger for eight years, days shy of his 28th birthday.

The Braves announced Tuesday afternoon they signed another Georgia native, Collin McHugh to a two-year contract worth $10 million guaranteed, with a $6 million club option for 2024 and $1 million buyout.

The Braves acquired a scuffling Rosario from Cleveland at the 2021 trade deadline for veteran infielder Pablo Sandoval. Rosario recorded a .685 OPS in 306 plate appearances with Cleveland. Rosario went on to tally a .903 OPS with Atlanta and provided above-average outfield defense.

Rosario homered three times in the National League Championship Series against the Dodgers, including a three-run blast in the series-clinching win at Truist Park, to earn MVP honors. He set an Atlanta franchise record and became only the fifth player in baseball history to record 14 hits in a postseason series.