ATLANTA - The Atlanta Braves have traded for a first baseman.

The team announced Monday it agreed to send four prospects to the Oakland Athletics to acquire first baseman Matt Olson. 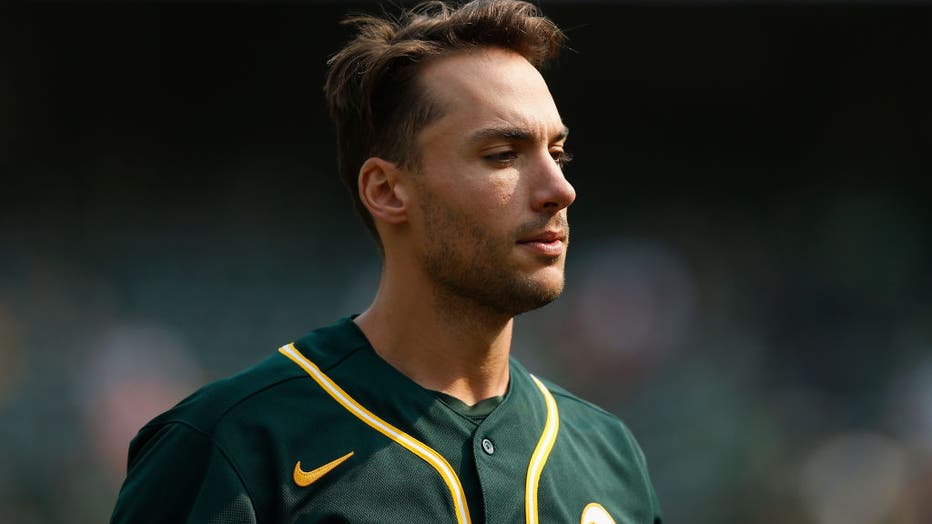 OAKLAND, CALIFORNIA - SEPTEMBER 25: Matt Olson #28 of the Oakland Athletics looks on between innings against the Houston Astros at RingCentral Coliseum on September 25, 2021 in Oakland, California. (Photo by Lachlan Cunningham/Getty Images)

Olson is entering his seventh major league season. He hit a career-high 39 home runs for Oakland in a 2021 All-Star season.

From CoolToday Park in North Port, Florida, Braves Manager Brian Snitker said he was unaware of a potential move to acquire Olson prior to news breaking on Monday afternoon.

The Athletics drafted Olson from Parkview High School in Lilburn in the 2012 MLB Draft.

The trade makes it less likely longtime first baseman Freddie Freeman will re-sign with the Braves.

Freeman had not signed with another team when news of the trade with Oakland was official, but it complicates a path for Atlanta to re-sign the former MVP first baseman.

Braves General Manager Alex Anthopoulos said he could not comment on Freddie Freeman since he is a free agent, but said, "We traded for Matt Olson to play first base."

The Atlanta Braves, the defending 2021 World Series Champions, appears to be losing Freddie Freeman, who became a free agent this year. Many believe Freeman is the face of the current franchise and some former Braves have even said Freeman could continue to stay in a Braves uniform as long as he wanted.

He became emotional discussing the trade, which sent several of the Braves' top prospects to Oakland, not to mention the implications the trade had for Freeman's future in Atlanta.

"You get attached," Anthopoulos said.

The Braves traded for Parkview's own Matt Olson, signaling the end of Freddie Freeman's run in Atlanta. Hear from his high school baseball coach about why he's optimistic about the future at first base for the Braves.

Freeman played 159 of 161 games for Atlanta in 2021, everyone one at first base. He had more plate appearances than any player in the National League in 2021.

He homered five times during the Atlanta Braves’ run to the 2021 World Series, including an RBI double and solo home run in his final at-bat during the deciding Game 6 at Minute Maid Park in Houston.

A live report from North Port, Florida, as the Braves made a blockbuster move.

Freeman didn’t contemplate his future in Atlanta after the Braves were crowned World Series champions, instead choosing to celebrate the historic season.

"When people talk to you and say the Atlanta Braves won the 2021 World Series champions, it’s not us," Freeman told a rowdy crowd at Truist Park. "You guys stop that and say, ‘No, we did it,’ because you guys are the reason we’re standing on this stage."

First baseman Freddie Freeman, who won the NL MVP in 2020, says the Braves championship win was the epitome of a team effort.

That didn’t stop Braves shortstop and Marietta native Dansby Swanson from drawing cheers from a crowd at Truist Park to re-sign Freddie.

During the Atlanta Braves World Series 2021 Celebration at Truist Park, Dansby Swanson is met with thunderous cheers after telling the Braves to re-sign Freddie Freeman. The two then hug as the crowd cheers 'Freddie, Freddie."

"I only have a couple things to say. First thing is, this trophy, this is ours, Atlanta, this is everybody’s," Swanson said. "The other thing — and it might get me in trouble — but re-sign Freddie."

Freeman embraced Swanson on the stage while cheers of "Freddie," echoed at Truist Park.

Freeman was the National League’s Most Valuable Player during the pandemic-shortened 2021 season.

Freeman will be remembered for his 12 seasons with Atlanta after debuting in 2010 at just 20 years old. He finished second in Rookie of the Year voting the following season, losing out to his teammate Craig Kimbrell.‘

Looking back at Freddie Freeman's epic run in Atlanta

From lean times to World Series glory, Freddie Freeman has become a Braves legend as it appears his 12-run in Atlanta is over.

Freeman is a native of southern California, drafted in the 2007 MLB June Amateur Draft from El Modena High School, southeast of Los Angeles.