The family involved in a boat explosion on Mother's Day on Lake Lanier is still recovering from burn injuries.

HALL COUNTY, Ga. - Two teens who were on a boat that exploded on Lake Lanier on Mothers’ Day are sedated as they continue to recover from their burns, a close family friend said.

Gunner Coleman, 13, and his older sister Taylor Coleman, 16, were airlifted to Grady Memorial Hospital’s burn unit after the family boat burst into flames near a refueling dock at Margaritaville at Lanier Islands.

"They’ve been going through multiple surgeries throughout the week," said David Dirkse, a close family friend of the Colemans. "[Taylor] got the worst of it. She was sitting on the back of the boat when the explosion happened so she took the brunt of the force."

Medics also rushed Annie Coleman, the teens’ mother, to Grady, but Dirkse said she is now at home recovering.

Doctors had to put Taylor on a ventilator, according to a report that first appeared in the Gainesville Times.

Dirkse said after the brother and sister wake up, doctors expect a long road to recovery.

"It’s gonna be a long haul, probably at least another four to six weeks before she’s even thinking about coming out of the hospital," he said. "The son [Gunner] is gonna be there for at least a few more weeks as well."

Steve Coleman, the teens’ father, and his youngest son were also on board, but they just sustain minor injuries. The blaze killed the family dog.

Dirkse said he saw the family on the lake a little while before the explosion.

When he got word of what happened, he jumped into action.

"You felt your heart just sink," he said. "I just immediately dropped everything, ran out here and picked them up and brought them to the hospital." 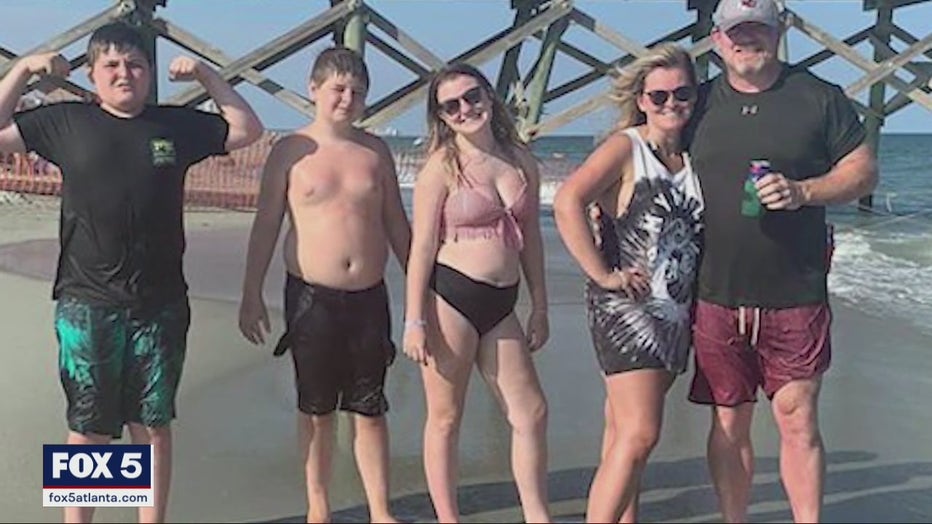 In the two weeks since the explosion, Dirkse said the family has received an outpouring of support from the community and around the country from fellow boaters.

He set up a GoFundMe campaign to help cover the children’s medical bills, which just surpassed $47,000.

Dirkse said the Coleman family is originally from St. Louis, and they don’t have any family here. That’s why he felt the need to help in any way he could.

The cause of the explosion is still unclear.

Hall County Fire Services spokesperson, Division Chief Zachary Brackett, did not respond to multiple requests for an update on the status of the investigation.