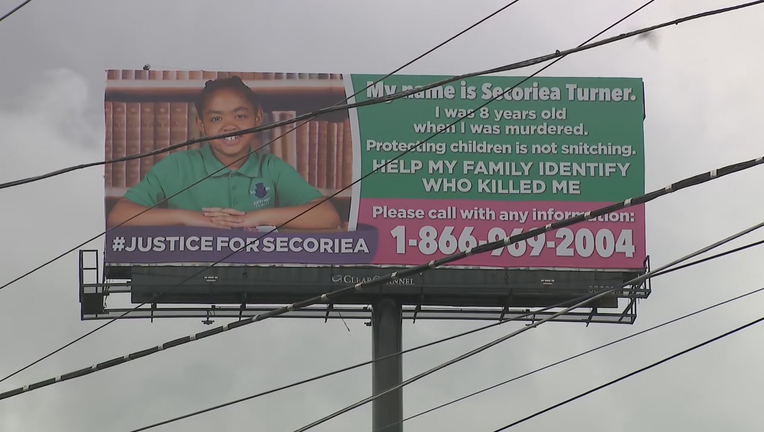 ATLANTA - The family of an 8-year-old who was shot and killed on the 4th of July in Atlanta is taking action to try and recruit witnesses to come forward.

Secoriea Turner's parents have placed two billboards in southwest Atlanta to solicit information in the deadly shooting of their daughter.

Her father says he just wants people to remember that this was an innocent child in their community who was killed.

Turner was riding in a Jeep Cherokee with her mother and another adult on the night of July 4 when they encountered “a makeshift roadblock that was manned by numerous armed individuals,” Atlanta police Lt. Pete Malecki said. When the driver tried to go around the roadblock, shots were fired and the girl was hit, Malecki told reporters at a news conference.

"My name is Secoriea Turner. I was 8 years old when I was murdered. Protecting children is not snitching. Help my family identify who killed me," the billboard reads. Authorities have arrested 19-year-old Julian Conley and charged him with felony murder.

Conley has maintained his innocence, telling FOX 5 he was at the scene, witnessed the shooting of Secoriea Turner, and even had a gun, but he did not fire it.

At the time of his arrest, Conley was out on bond for a March incident where he was charged with terroristic threats, possession of a firearm during a felony, and possession of a false ID. He had been arrested at least two other times before.