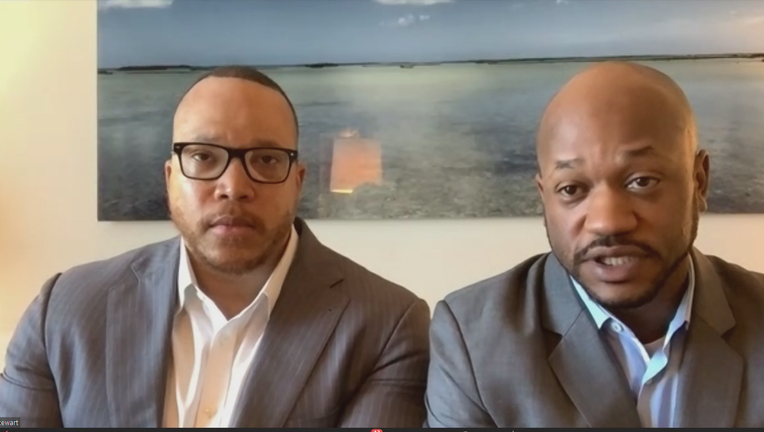 Attorneys for Rayshard Brooks' family say they are disappointed with the reinstatement of Garrett Rolfe with APD. (PHOTO: FOX 5 Atlanta)

The initial feeling of surprise was followed by disappointment.

Those are the emotions attorneys said Rayshard Brooks' family felt upon learning the news of Garrett Rolfe's reinstatement with the Atlanta Police Department.

The Atlanta Civil Service Board on Wednesday concluded Rolfe, who is facing a murder charge in the death of Rayshard Brooks, was wrongfully terminated by Atlanta officials. The board ordered his dismissal be revoked after an appeal hearing.

Officer charged in Rayshard Brooks’ death, reinstated by Atlanta board

Garrett Rolfe's reinstatement was ordered by the Atlanta Civil Service Board. Rolfe will will remain on administrative leave until his criminal charges are resolved.

Chris Stewart, an attorney for Brooks' family, said the family is disappointed by the news of Rolfe's reinstatement. At the same time, the family's legal team agrees with the conclusion of the appeal: Atlanta officials were procedurally lax with handling Rolfe's firing.

Stewart said the family and rest of the legal team are hopeful the city will try to re-terminate Rolfe, this time with proper procedure, but they are not assuming anything with regards to the city after the procedural blunder.

"Our understanding is (Atlanta city officials) would immediately try to do it the proper way," Stewart said.

The city of Atlanta said in a statement the board did not make a determination whether Rolfe violated police department policies and APD would assess whether additional investigative action is necessary.

The Atlanta Civil Service Board determined the city did not provide Rolfe an opportunity to state his side of the story before terminating him in June 2020 days after the shooting and under pressure from public outcry for justice.

Stewart said the legal team agrees with Rolfe's attorneys regarding the city's procedural shortcomings and finds it "mind-boggling" city officials weren't aware of the proper procedure to fire an officer. The board's ruling does not make an assertion whether or not criminal activity occurred.

Stewart said the city's actions in the aftermath of Rolfe's seemed to be pacifying in nature. Stewart said the Black community doesn't want temporary pacification, they want permanent justice.

Rolfe's attorney, Lance LoRusso, said he is on administrative leave while the incident is investigated and pending a resolution of his charges. LoRusso said Rolfe is entitled to pack pay dating to his initial termination.

Rolfe faces 11 criminal charges, including felony murder and multiple counts of assault with a deadly weapon.

COVERAGE OF THE DEATH OF RAYSHARD BROOKS: