NEWNAN, Ga. - The Newnan Police Department is investigating reports of white vans approaching children, and while there are no reports of any attempted child abductions, they are warning families to be diligent.

One of the reported incidents happened on November 11th on Berry Avenue. A 16-year-old was walking to school when she was caught off guard. "When I got to the stop sign, there was a white van came up, and there was a black man inside, and he was like, 'Do you know where the nearest gas station was?'" said the teen who asked not to be identified.

She said she quickly answered and started to leave. "He rolled the window up, and he was like, 'Okay,' and I get ready to walk off, and then he gets out of the car and he was just like "Come Here," she said. "I just dropped my bookbag, and I ran."

Terrified, she sprinted around the corner and made it to school safely. "My life could be taken if I didn't get away fast enough," she said.

This teen's encounter wasn't the only one that day. Hours later, police say a different white van approached an 11-year-old boy.

"He had gotten off the bus, and the van was sitting there, and he said 'Hey, come here,' and the child went running," said Newnan Police Department Lt. Tate Washington.

Lieutenant Washington said it's unlikely these cases are related. "One had windows and one didn't have windows," said Washington. "Just a regular van, and one supposedly had a big lock on the back, the other didn't."

The Newnan Police Department posted on Facebook alerting families, asking them not to panic. 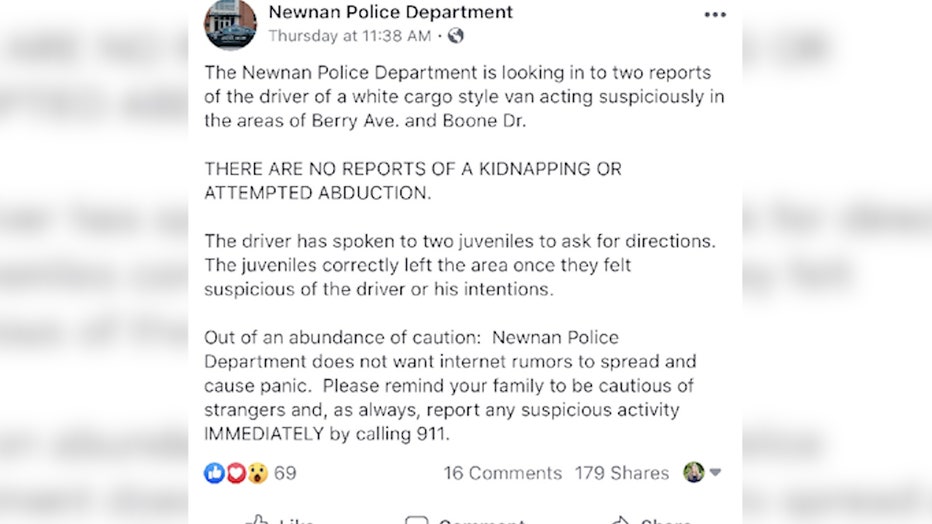 For the 16-year-old who was approached, she says she's scared to leave her home. "I don't walk anymore, I don't walk around the corner," she said.

Police say be aware of your surroundings, and make sure if you see something, say something.

"If you do see white vans or someone acting suspiciously, don't post it on Facebook, call the police," said Washington.

Police said the best course of action is to call 911 immediately.