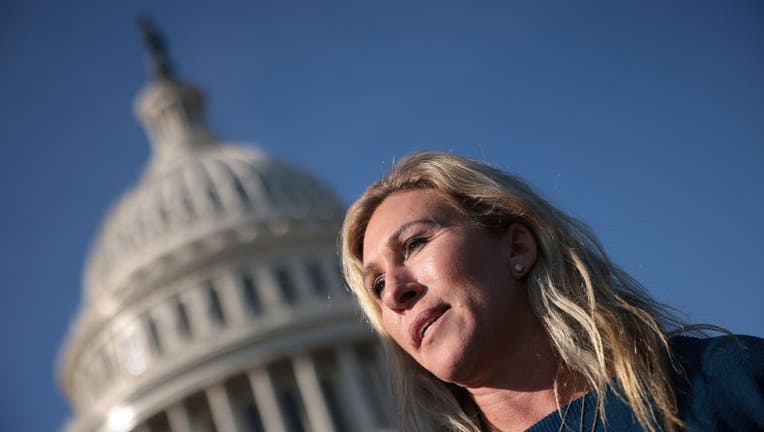 In Thursday's hearing, the committee played taped depositions from Trump aides saying Greene and several other Republican members of Congress later sought pardons from the White House after the Capitol was breached in a day of violence.

The deposition showed Cassidy Hutchinson, a former aide to White House Chief of Staff Mark Meadows, saying that Rep. Mo Brooks of Alabama and Rep. Matt Gaetz of Florida sought advocated for "a blanket pardon" for lawmakers who were involved in a Dec. 21 meeting at the White House.

While Hutchinson said that Greene did not contact her with a request for a pardon, she said that she "heard that she had asked the White House Counsel's Office for a pardon … but I didn't frequently communicate with Ms. Greene."

On Twitter, Greene denied the allegations, calling it "gossip and lies" and called the committee's investigation a "January 6th Witch Hunt."

Gaetz also tweeted Thursday that the hearing was a "political sideshow," and Perry denied in a statement having ever sought a pardon.

The allegations come the same day the committee heard from three Trump-era Justice Department officials who recounted persistent badgering from the president, including day after day of directives to chase baseless allegations that the election won by Democrat Joe Biden had been stolen. They said they swept aside each demand from Trump because there was no evidence of widespread fraud, then banded together when the president weighed whether to replace the department’s top lawyer with a lower-level official eager to help undo the results.

The hearing, the fifth by the panel probing the assault on the Capitol, made clear that Trump’s sweeping pressure campaign targeted not only statewide election officials but also his own executive branch agencies. The witnesses solemnly described the constant contact from the president as an extraordinary breach of protocol, especially since the Justice Department has long cherished its independence from the White House and looked to steer clear of partisan considerations in investigative decisions.

"When you damage our fundamental institutions, it’s not easy to repair them," said Jeffrey Rosen, the acting attorney general in the final days of the Trump administration. "So I thought this was a really important issue, to try to make sure that the Justice Department was able to stay on the right course."

The hearing focused on a memorably tumultuous time at the department after the December 2020 departure of Attorney General William Barr, who drew Trump’s ire with his public proclamation that there was no evidence of fraud that could have changed the election results.

He was replaced by his top deputy, Rosen, who said that for a roughly two-week period after taking the job, he either met with or was called by Trump virtually every day. The common theme, he said, was "dissatisfaction that the Justice Department, in his view, had not done enough to investigate election fraud."

Trump presented the department with an "arsenal of allegations," none of them true, said Richard Donoghue, another top official who testified Thursday. Even so, Trump prodded the department at various points to seize voting machines, to appoint a special counsel to probe fraud claims and to simply declare the election corrupt.

The department did none of those things.