Gas stations respond to A decrease in fuel supply after a Georgia-based energy company halted operations following a cyber attack.

DACULA, Ga. - Cars drive up to gas pumps at a Dacula gas station only to be disappointed.

Several gas stations across metro Atlanta have been temporarily closing to take inventory after a Georgia-based energy company halted its operations and caused worries about the fuel supply.

From panic buying to restrictions at the pump, AAA reports the average price per gallon of gas in the U.S. rose by 6 cents, and it's expected to rise if the shutdown persists.

AAA said prices are likely to climb higher this week because of Alpharetta-based Colonial Pipeline's shutdown following a ransomware attack.

A sign on a Marathon gas pump in Lithia Springs said it was limiting customers to purchases of 10 gallons due to the Colonial Pipeline disruption. 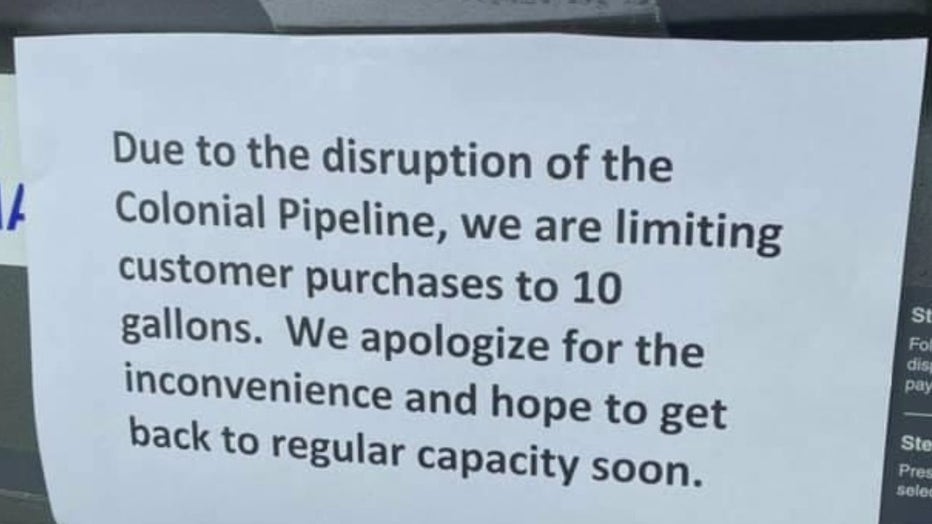 A sign in Lithia Springs at a gas pump.

AAA and industry experts are telling consumers not to panic and rush to the gas pump.

Colonial Pipeline is in the process of restarting portions of its network. It said Monday that it was evaluating the product inventory in storage tanks at its facilities. Administration officials stressed that the company proactively took some of its systems offline, as opposed to hackers doing it, and that its operating systems were spared.

The Georgia-based company said it transports more than 100 million gallons of fuel daily, through a pipeline system spanning more than 5,500 miles.