Experts say time is of the essence when it comes to how a halt to a major fuel supplier's operations will affect consumers.

ATLANTA - Days after an Alpharetta-based energy company reported a ransomware attack and halted its operations amid an investigation, it's still unclear how consumers will be affected and if a fuel shortage on the East Coast is imminent.

It is a major supplier of fuel and delivers an estimated 45% of all fuel consumed on the East Coast.

The Georgia-based company said it transports more than 100 million gallons of fuel daily, through a pipeline system spanning more than 5,500 miles.

Experts say time is of the essence when it comes to how the stoppage will affect consumers.

"The worry is, without those tanks being replenished at around Day 4 or 5, that pool — so to speak — of gasoline will be chiseled at pretty quickly," Patrick De Haan, industry analyst at GasBuddy, said.

"We proactively took certain systems offline to contain the threat, which has temporarily halted all pipeline operations, and affected some of our IT systems," a statement from the company said.

De Haan said he's hopeful the industry halt to Colonial Pipeline's operations will be brief and have a minor effect on consumers. He recommended not panicking and creating a rush to gas pumps, which could exacerbate the issue. 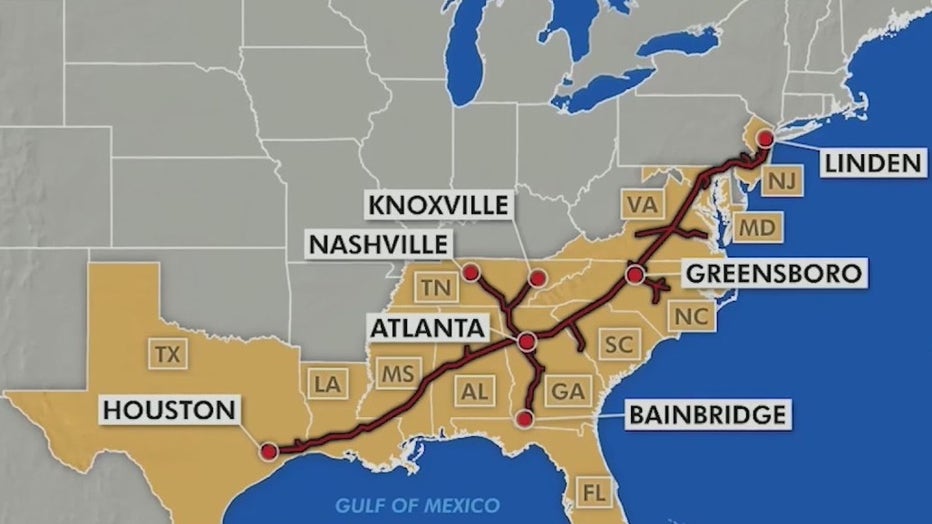 An illustration of Colonial Pipeline's network.

Oil analyst Andy Lipow said the impact of the attack on fuel supplies and prices depends on how long the pipeline is down. An outage of one or two days would be minimal, he said, but an outage of five or six days could cause shortages and price hikes, particularly in an area stretching from central Alabama to the Washington, D.C., area.

Lipow said a key concern about a lengthy delay would be the supply of jet fuel needed to keep major airports operating, like those in Atlanta and Charlotte, North Carolina.

The company is trying to determine how much control the ransomware gives attackers.

The company issued a statement to FOX 5 Atlanta.

"A third-party cybersecurity firm …  has launched an investigation into the nature and scope of this incident, which is ongoing," the statement said. "We have contacted law enforcement and other federal agencies."