Woman stunned her sister has been missing for six months

Tiffany Foster left her apartment on March 1 to run errands and hasn't been seen since. Kimberly Bryan, Foster's sister, said while time has passed, it has not become any easier.

Newnan, GA - A family is searching for answers in the disappearance of a Newnan woman who has not been seen or heard from in six months.

Tiffany Foster left her apartment on March 1 to run errands.

"Honestly, I thought that we would locate her within a couple of weeks, maybe a month," said Kimberly Bryan, Foster's sister.

She said while time has passed, it has not become any easier. 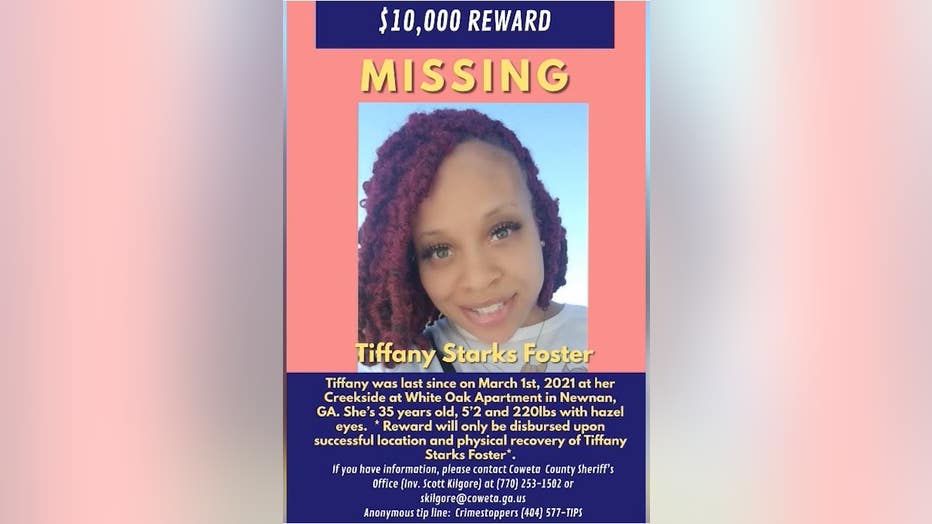 "I woke up at about three or four o'clock this morning and I texted my friend and I was like, 'I can't believe it's been this long.' I was just upset because just thinking about I'm at home, I'm safe, I'm warm, people know where I'm at, I'm able to see my children. And then to think about, I don't know that about my sister," Bryan said.

Foster's car was found in College Park just a week after she disappeared, but Bryan said they're still not any closer to getting answers.

"She is a loving and kind person. She is a mother, she's an aunt, and we miss her," she said.

According to authorities, her fiancé, Reginald Robertson, was the last person to see her.

Coweta County investigators charged him with stealing her car, as well as kidnapping and aggravated assault for an incident that happened three months before she disappeared.

Bryan said it has been gut-wrenching to see sister's three children try to make sense of their mother's disappearance.

"I'm a daughter and I'm a mother. I can only imagine how her children are feeling or how I would feel if something happened to my mom. There are things in life that you need to go to your mother for, and they can't do that," Bryan said.

Bryan said she misses her sister and her best friend, she can't help but wonder if she'll ever be able to spend time with her again.

"Her laughter is so contagious. You cannot be around her and not laugh. And I miss that. I miss her company here. I miss her asking can I borrow some clothes or shoes? Can you do my hair or makeup? I miss doing sister stuff. I miss being able to call her when I'm going through stuff. I can't do that," she said.

If you have any information about tiffany Foster, please contact the Coweta County Sheriff's Office.

There is a $10,000 dollar reward for information on this case.