As of 3 p.m. Sunday, there were 7,685 confirmed cases in the county, a jump of 240 since Thursday's numbers were released. While state health officials have pointed out the wider availability of testing in the county, some health experts said the numbers show there is an ongoing spread of the virus in the community. The state does not publically release a breakdown of tests by county, but according to a data snapshot released Monday by the Gwinnett, Newton, & Rockdale County Health Departments, 28,760 tests had been administered.

Across the state, the total confirmed cases were just below 73,000. This week, the rate of new cases has steadily increased by an average of about 1,700, but within the last 24 hours, 1,900 new cases were reported with 25 new deaths statewide, bringing the death toll to 2,770 since the pandemic began. That’s substantially higher than the earlier peak in late April.

Sharp uptick in confirmed coronavirus cases across the South

Several states across the South, including Georgia are seeing a sharp uptick in the number of confirmed coronavirus cases. 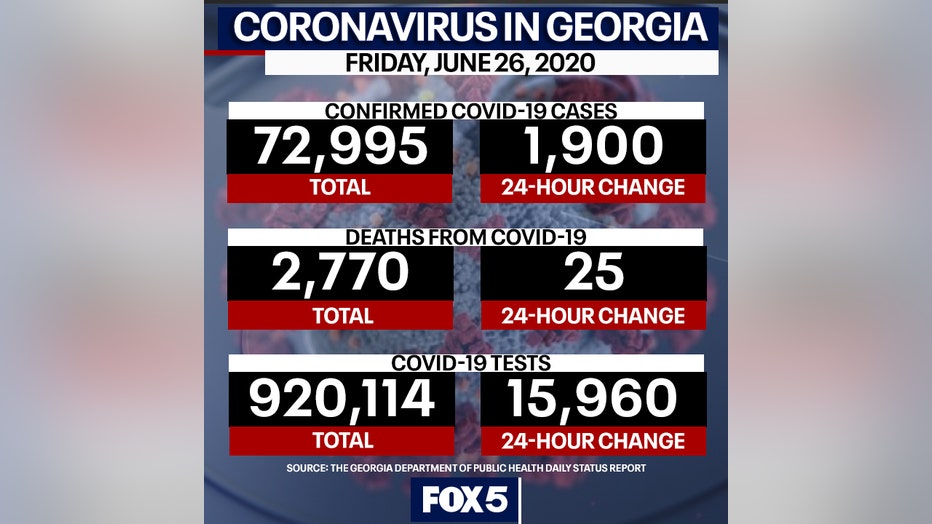 This week, state and local officials once again stressed the importance of being responsible, vigilant, to wear a mask, and make safe decisions for their families after this past week saw a spike in the numbers. Gov. Kemp, after touring a drive-through testing site in Gwinnett County, took his own mask off to talk about the coronavirus situation in the state.

"There are just some people who do not want to wear a mask. I'm sensitive to that, from a political environment of having people buy into that and create other issues out there, but it's definitely a good idea," Gov. Kemp said adding that he believes the private sector is doing a good job at following social distancing and requiring masks.

Gov. Brian Kemp gave remarks on Friday, June 26, 2020, following a tour of a testing site in Gwinnett County. He spoke about the recent increase in cases, the state's response, and the need to remain vigilant.

“I’m certainly not imposing new restrictions right now. I think what we have on the books has done very well for us," Kemp said adding he would re-evaluate the situation and make decisions based upon the data. “We’re not letting our guard down. We’ve got to continue to fight hard every day, continue to jump on the hot spots, and that’s what we’re seeing a lot of in the state right now.”

Kemp cited a nursing home issue in Troop County, tied “mainly to workers in the flooring industry” and a flare-up among farm workers in south Georgia. He said he’s not considering requiring people to wear masks in public or imposing any other new restrictions, saying the ones in place are sufficient.

That recent spike wasn't just limited to Georgia. Many states across the country saw a significant rise in cases and some saw more than a significant bump.

Just because it's open doesn't mean it is healthy for you. That's the message health officials are trying to convey. They are asking everyone to evaluate their individual risks before attending a crowded club, bar, or event.

Florida announced new actions on Friday in hopes of once again flatting the curve there. The state is suspending the consumption of alcohol at bars statewide. The news came minutes after Florida reported nearly 9,000 new coronavirus cases, a new record for daily increases. Officials have said the number of cases is surging among young adults, which could endanger those who are most vulnerable to the virus.

Texas went a step further, ordering all bars to close and slashing the number of customers allowed inside a restaurant to half the capacity.

If the cases were to get that bad in Georgia prompting another round of bars closures, there is a bit of good news for folks who like their libations and for already struggling business owners. The Georgia Legislature sent a bill to the governor's desk this week that would allow the different counties and cities to decide on allowing the delivery of beer, wine, and spirits by restaurants, grocery stores, or liquor stores.

Social distancing is not only about preventing the illness itself, but rather, slowing the rate at which people get sick.&nbsp;

• Wash your hands often with soap and warm water for at least twenty seconds.

• If soap and water are not available, use an alcohol-based hand sanitizer.

• Avoid touching your eyes, nose, and mouth with unwashed hands.

• Stay home when you are sick.

• Cover your cough or sneeze with a tissue, then throw the tissue in the trash.

• Symptoms, testing and how to prepare amid growing COVID-19 outbreak

• Who is most susceptible to coronavirus? COVID-19 not just affecting older people

• Coronavirus cleaners: These products will kill COVID-19, according to the EPA

• Coronavirus and pets: Your cat or dog probably can’t get COVID-19, WHO says

• Will sick leave protect me if I get ill from coronavirus? 5 questions answered