FOX 5's Aungelique Proctor has learned the indictment cites the sheriff's office's use of restraint chairs against four inmates. The indictment also alleges the sheriff ordered his employees to use excessive force at the jail last year.

"The indictment alleges specifically, that without justification, Hill ordered his employees to strap his detainees into a restraint chair and keep them there for hours in violation of their constitutional rights," said Kurt R. Erskine, acting U.S. Attorney for the Northern District of Georgia.

Erskine said Hill deprived the detainees of due process because the force was so excessive it amounted to punishment. Erskine said each charge carries a maximum sentence of 10 years in prison if it is found beyond a reasonable doubt that the use of force caused pain and bodily injury.

COPY OF THE INDICTMENT

Hill released a response to the allegations on Tuesday.

"Today I will begin the process of fighting a political motivated federal legal case," a statement attributed to Hill said. "My legal team are the only ones authorized to speak on the details of this matter, and they are confident about the facts of this case.

"Meanwhile, as we go through this process,  I will continue to focus on the mission of fighting crime in Clayton County for continued success."

"There was no injury in any of these instances," Hill's attorney Drew Findling said.

Hill pleaded not guilty to all four counts and was out on bond Tuesday.

"In this particular case, the judge has set particular standards, bond standards for Sheriff Hill on his possession of a weapon," said Erskine. "He is limited, I believe, to one weapon, must be for law enforcement purpose."

The indictment describes Hill using a restraint chair on several detainees who were allegedly compliant with law enforcement personnel and offered no apparent resistance.

One detainee allegedly urinated in the restraint chair after they were left restrained for hours and "not allowed to go to the restroom."

In a separate incident that same day, the indictment states Hill ordered a 17-year-old detainee be restrained in a chair after a text exchange between Hill and a Clayton County deputy. Hill asked the deputy how old the detainee was. When the deputy said they were 17, Hill allegedly replied with the word, "Chair."

Hill allegedly harassed a person who did landscaping work for a Clayton County deputy in April 2020. The person and the deputy had a payment dispute for work in Butts County, unrelated to the deputy's employment.

Over the phone, Hill accused the person of harassing the deputy. The landscaper allegedly tried to confirm Hill's identity by texting and video calling him. Hill warned the victim not to call or text him anymore in a text. The victim complied, the indictment said.

The next day, according to the indictment, Hill filed for a warrant for the person's arrest and sent an armed fugitives squad to arrest the person. The indictment states Hill confronted the landscaper, who turned themselves in several days later. Hill allegedly instructed the landscaper to be placed in a restraint chair, though the person was surrounded by law enforcement, compliant and offering no resistance. The victim was left in the chair for several hours, the indictment says.

During an incident in Feb. 2020 in Clayton County Jail, Hill confronted a person accused of assaulting two women in a grocery store. The indictment says the suspect was cuffed and surrounded by law enforcement personnel while they spoke to Hill. Hill allegedly ordered the suspect to be strapped in a restraint chair after a verbal altercation.

"Badges and guns don’t come with the authority to ignore the Constitution," said Christopher Macrae, FBI Special Agent in Charge. "They come with the responsibility to protect it from anyone who would violate it, especially another public servant."

FOX 5 Atlanta learned Hill was the target of a federal investigation into allegations of excessive force at the jail in June 2020, shortly after he was elected to his fourth term. 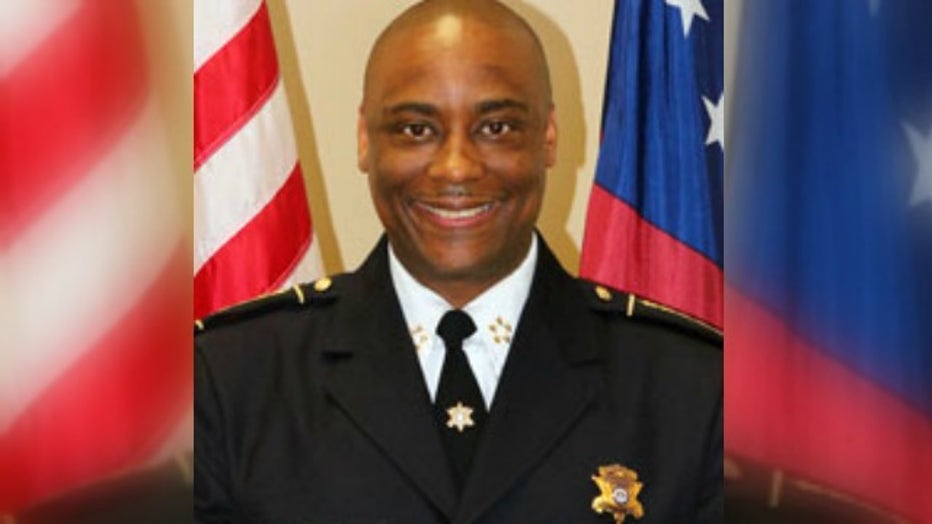 Hill became Clayton County's first African American sheriff when he was originally elected in 2005. He served non-consecutive stints as sheriff from 2005 to 2008, followed by his current run beginning in 2013.

Hill was briefly a Georgia state representative prior to being elected sheriff.

In an unrelated incident, Hill was indicted by a grand jury in Gwinnett County for a shooting in 2015. Hill claimed he was practicing police tactics with a woman when he shot her.

A judge sentenced Hill to 12 months of probation and a $1,000 fine after he entered a plea of No Contest. The woman shot in the incident told police the shooting was an accident and Hill should not have been criminally charged.