We knew them first as High 5 stars. Two of the top quarterbacks in the 2021 NFL Draft class are Cartersville's Trevor Lawrence and Harrison's Justin Fields.. And if the Falcons did select Fields, his dad jokes he'd live with them to save on rent.

The Chicago Bears traded up nine spots with the New York Giants to draft Ohio State quarterback Justin Fields with the No. 11 overall pick in the NFL draft on Thursday night.

A two-time Big Ten Offensive Player of the year, Fields becomes the second quarterback drafted by general manager Ryan Pace since he was hired in 2015. The Bears traded up a spot in 2017 to take Mitchell Trubisky at No. 2 over Patrick Mahomes and Deshaun Watson. Trubisky is now backing up Josh Allen in Buffalo after the Bears decided to let him go as a free agent.

The Bears made the playoffs for the second time in three years, though they got in as the seventh seed in an expanded field. They went 8-8 in the regular season for the second year in a row, then lost at New Orleans in a convincing wild-card loss. 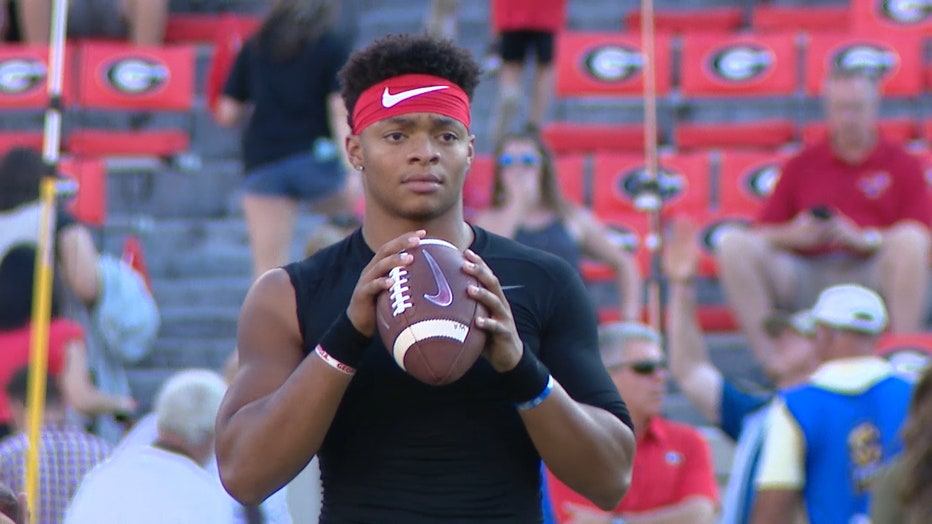 Even so, chairman George McCaskey opted to stick with Pace and coach Matt Nagy. But the heat was on them to get this pick right.

The Bears need help on the offensive line and at receiver, not to mention a quarterback to groom behind newly arrived veteran Andy Dalton. But there are also issues on defense, particularly after letting former All-Pro cornerback Kyle Fuller go for salary cap reasons. They also could use another edge rusher opposite Khalil Mack after Robert Quinn managed just two sacks last season.

SEE ALSO: Fields family is all for '1' as national championship nears

Fields is Chicago's first opening-round pick since 2018, when they took linebacker Roquan Smith at No. 8. Smith is the Bears' only first-round pick still on the team since Pace was hired in 2015.

They traded their 2019 and 2020 first-rounders to the Oakland Raiders for Khalil Mack prior to the 2018 season.

Receiver Kevin White (No. 7 in 2015), linebacker Leonard Floyd (No. 9, 2016) and Trubisky were either outright busts or simply did not perform the way Chicago hoped.