ATLANTA - College football players all across the country are coming together to speak out against the cancellation of the 2020 season, as the COVID-19 pandemic continues.

One of the players leading the way as a voice for his fellow peers is former Harrison High School quarterback Justin Fields.

"There's been too much work put in, #WeWantToPlay," Fields said in a tweet on Sunday night.

Fields, a favorite to win the Heisman Trophy this season, is now a junior for the Ohio State Buckeyes of the Big Ten conference. 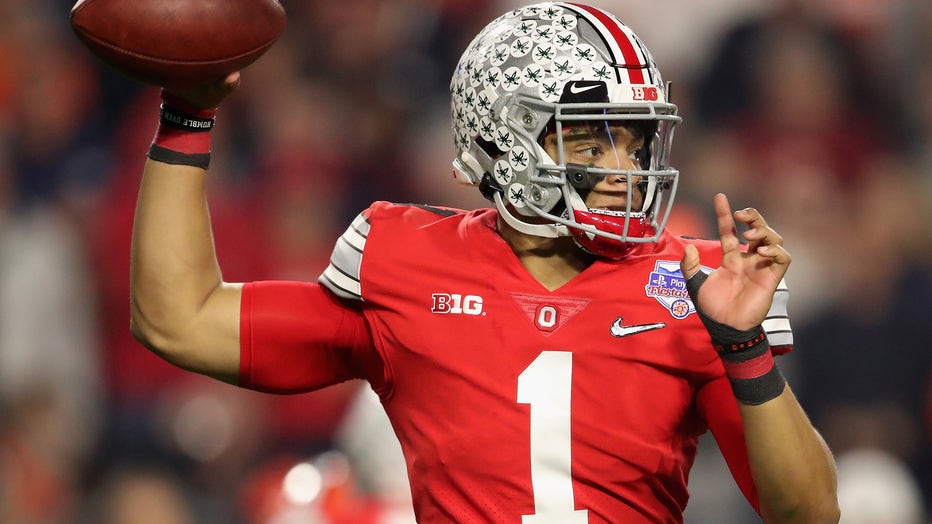 GLENDALE, ARIZONA - DECEMBER 28: Quarterback Justin Fields #1 of the Ohio State Buckeyes throws a pass during the PlayStation Fiesta Bowl against the Clemson Tigers at State Farm Stadium on December 28, 2019 in Glendale, Arizona. The Tigers defeated

Fox 5 Sports' Ken Rodriguez spoke to Fields' father, Pablo, on Tuesday, after a published report from the Detroit Free Press said the Big Ten is expected to vote to cancel the 2020 football season.

"I truly believe he's safer there than he would be here," Pablo Fields said. "The way Ohio State cleans the facilities, they get two COVID tests per week. Here he's trying to find some weights, trying to find some buddies to throw to here and some receivers here.

We don't know what they have, but in Columbus, we know all the guys are getting tested twice a week, and the equipment is sanitized, the ball is sanitized, and everybody's masked up. We feel a lot better about him working out there in that atmosphere than we would here, especially during the quarantine when he was working out. So I think he's a lot safer there."

Fields and Clemson quarterback Trevor Lawrence, who played at Cartersville High School, were two of the more prominent players who shared a graphic on social media with the hashtags "WeAreUnited and #WeWantToPlay on Monday. The statement included a list of demands, including health and safety protocols, and the desire to create a college football players association.

Pablo Fields and other parents of Ohio State football players released a statement on Sunday supporting the university and coaching staff, and the Buckeye players' right to play.

Pablo Fields said Ohio State has done a "great job" in making him and other parents feel comfortable with their kids playing this season through Zoom calls and other forms of communication.

"We feel so comfortable with the protocols at Ohio State that we think and believe our kids, many of us, that they would be safer there, because I tell you what, if they come home or they're taking online classes it's back to what I was telling you guys was happening during the quarantine," Pablo Fields said.

"These guys are throwing balls, and getting receivers, playing seven-on-seven ball, right in each others' faces, and things of that nature. You're going to get more positive tests. I think Trevor (Lawerence) put it that way in his statement. If these kids go home they're going to do whatever, so at least they kind of have a chaperone so to speak, and something to play for.