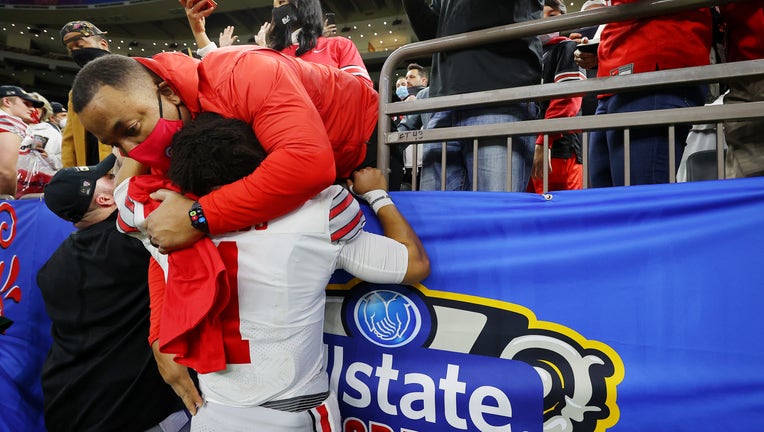 NEW ORLEANS, LOUISIANA - JANUARY 01: Justin Fields #1 of the Ohio State Buckeyes celebrates with friends and family after defeating the Clemson Tigers 49-28 during the College Football Playoff semifinal game at the Allstate Sugar Bowl at Mercedes-Ben

ATLANTA - On Monday, former Harrison High School star Justin Fields will be playing in the College Football Playoff National Championship game. Win or lose, the Ohio State quarterback has already achieved greatness in a short period of time. Only his family knows what it took to get to this point in his career.

"Everybody… they see the glory, but they don’t see the story," says his father, Ivant "Pablo" Fields.

Justin is coming off the best performance of his career in which he threw for 385 yards and six touchdowns in the semifinal beatdown of Clemson. Even his competitive sister, Jaiden, a UGA softball player, had to admit, "his last game is the best I’ve seen him play. It was really exciting and I was jumping out of my seat."

"It just got to the point I was just laughing ‘cause it was like ‘wow,’ I was just proud of him."

Fields family is all for ‘1’ as national championship nears

On Monday, former Harrison star&nbsp;Justin Fields will be playing in the national championship game. Only his family knows what it took to get to this point in his career.

Amazingly, Justin is less than three years removed from his senior year at Harrison. Since then, he has been the nation’s top high school recruit, quarterback at UGA before transferring to Ohio State, where he became a Heisman Trophy candidate and Big-10 Offensive Player of the Year in back-to-back seasons.

He now stands on the brink of college football immortality, which elicits a chuckle from his father, who remembers the family’s more humble ambitions.

"I mean, my plan was, 'Hey man, you go and be second string at Northwestern. Stay there five years. Get a master;s degree. Work in the banking industry in Chicago and you’re good to go. He had different plans."

And so an NFL career awaits where ironically several mock drafts have him going to his hometown Atlanta Falcons with the fourth overall selection of the draft. And for a close-knit family, that is almost too much excitement to take. 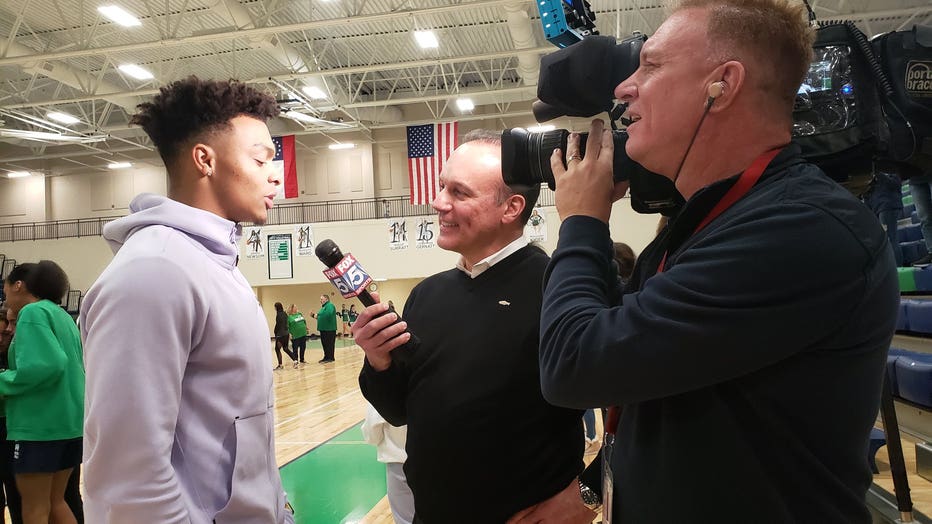 Ever the hometown kid, K-Rod and Super Blaine interviewed Justin Fields when he returned to Harrison to celebrate the Hoyas' state championship last year.

And heaven help the family if there is only one NFL ticket available. Who would it go to?

"Ahhh, the guy who drove him to quarterback lessons, baseball camps, and all of that," Ivant said.

Jaiden interjected - how about, "the person who drove him to be a competitor!" 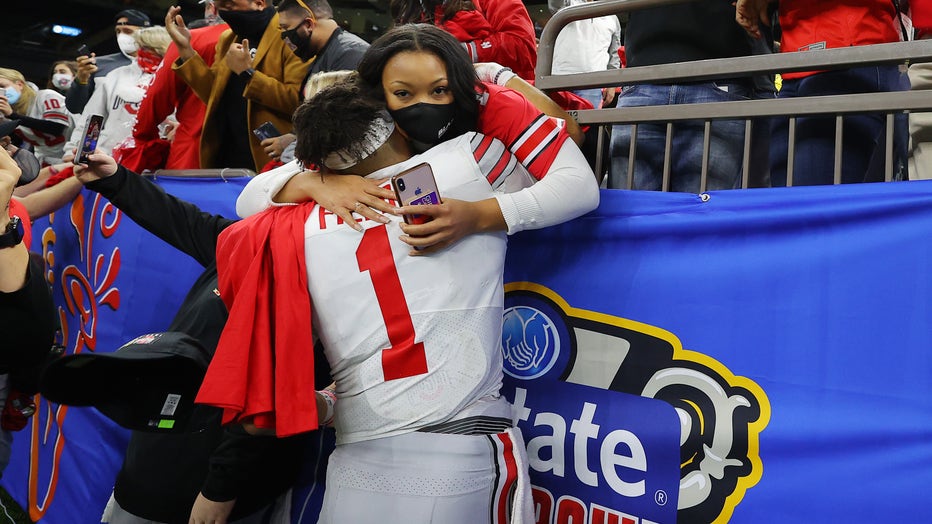 NEW ORLEANS, LOUISIANA - JANUARY 01: Justin Fields #1 of the Ohio State Buckeyes celebrates with friends and family after defeating the Clemson Tigers 49-28 during the College Football Playoff semifinal game at the Allstate Sugar Bowl at Mercedes-Ben

"They used to compete. You have to realize she was committed to Georgia in eigth grade before anyone heard of Justin Fields," Ivant said. "She’s the magic behind him being so competitive."

And it’s that magic that keeps the Christmas decorations up in their West Cobb home even today, for fear that removing them would jinx Justin’s performance in the National Championship game Monday.

"My wife is superstitious and doesn’t want to take this down until the natty. That’s on the do list, but I have to check with her first ‘cause if I take it down and something happens, I’ll live in the dog house!"