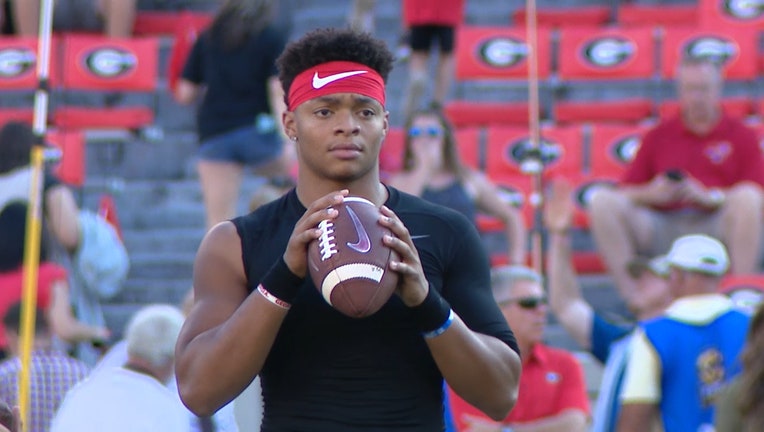 After one of the most talked-about transfers in recent college football memory, quarterback Justin Fields nearly changed his mind.

"I called my dad like two weeks into [being at Ohio State]," said the Buckeyes quarterback, in town for Thursday night's College Football Awards. "I was like, 'dad, I think I want to go back to Georgia.'"

Fields, the highly-touted Harrison High School grad, decided to go to Columbus after spending his freshman season in Athens as a backup to Jake Fromm. He says Bulldogs head coach Kirby Smart and offensive coordinator James Coley told him before he left that, if he ever changed his mind, he'd be welcome to return to UGA. Fields is happy, however, he stuck to his decision.

"When people do uncomfortable things, I think it makes them stronger," said Fields. Credit to my dad for helping me out, keeping God at the center of my life, helping me through it."

Fields is hoping to earn the Davey O'Brien Award for the nation's top quarterback on Thursday. Saturday, he heads to New York City for the Heisman Trophy ceremony, where he's a finalist, along with teammate Chase Young.

"I don't know how comfortable he was when he got here [to Ohio State]," said Young, a defensive lineman with the Buckeyes. "They told me and a few other leaders to go and make him feel like he's home."

The rocky transition was not helped by social media, where disappointed Georgia fans directed their frustrations at Fields.

"Of course Georgia fans are going to bash you, they're very passionate about the state of Georgia," said Fields. "Growing up in Georgia, I know that. Being here, seeing that, you have to turn your phone off and be with your family and the people who's been with you from the jump."

The decision to transfer, it seems, worked out for Fields, who has his new team in the College Football Playoffs, where they will face Clemson in the Fiesta Bowl in the national semifinals. Fields says he's maintained close friendships with many UGA players, and talks to them almost every day.

"All the players there knew I didn't want to leave Georgia," said Fields. "At the end of the day I had to do what's best for me."

"I saw him in the hotel [in Atlanta], slapped him across the back of the head," said Reed with a smile. "Me and Justin have a great bond, he's a good friend of mine."

Reed says he followed Fields this season, saying "he's done everything I expected him to do," and is not surprised his former teammate is a Heisman Trophy finalist.

Fields says he's excited to face off with fellow High 5 Sports alum Trevor Lawrence in the Fiesta Bowl, as both quarterbacks share a private coach and have trained together for years. Though there were tough moments, Fields give his experience at Georgia some credit for getting where he is today.

"I think the stuff I went through at Georgia not only prepared me for the football life, but actually made me a stronger person, facing adversity, when times don't go your way. Going through that stuff at Georgia, I'm grateful for it, really."