ELBERTON - From Elberton to Athens and Kansas City, plenty of people marvel at Mecole Hardman. He, however, is in awe of something else.

"These kids wake up every day with challenges they have to face that we don't know nothing about," said Hardman "They do it effortlessly."

That is why, since he was in 6th grade, Hardman has been involved with "Friends Helping Friends," a charity in Elbert County, where he grew up. The organization provides activities and opportunities for the area's special needs students.

This past weekend, the Kansas City Chiefs receiver and return specialist attended the group's fundraiser at Elbert County Middle School, where Hardman was also honored for his work with the group. While the special needs students the group helps were not able to be there in person as a COVID-19 precaution, organizers say the event raised over $10,000. The former University of Georgia and Elbert County High School star says he is looking forward to spending time in person with the kids he cares so much about as soon as possible.

GET MORE HIGH 5 SPORTS "IN YOUR FACE"

"If they see me, it's like, I know who that is," said Hardman. "I can interact with him, I can feel his touch. I want to be around that, that energy they bring." 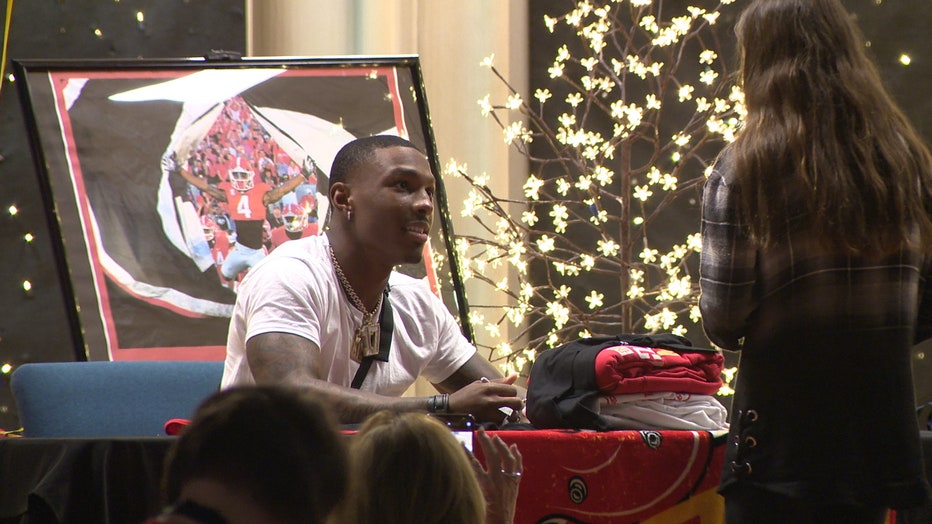 On the football side of things, Hardman has big goals for year No. 3 in the NFL. The Bowman, Georgia, native has played in two Super Bowls in his first two professional seasons, winning one of them. He also plays an important role on Kansas City's prolific offense; though chances to make an impact can feel limited because of the Chiefs' plethora of playmakers on offense.

"It's very tough," said Hardman, who had 41 catches for 560 yards and 4 touchdowns last season, adding a punt return score as well. "You have to take advantage of your opportunities. I think I do my best with my opportunities given. I can improve on a lot of things. It's a hard situation to be behind Tyreek Hill. A lot of people can't be behind him and still do the things I do, still be noticeable in the offense. I wasn't given that number one role, get 80 targets a season, 100 targets a season. Hopefully, I can be a better target for Pat this year and put them numbers up."

GET MORE FROM FOX 5 SPORTS

Hardman says winning is his number one goal; and personally, he hopes to be a 1,000-yard receiver and to score 10 touchdowns.

He also has off-field goals, starting with "Friends Helping Friends." He wants to host in-person events for the students as soon as it is safe, and has ideas for a road trip of some sort with the kids. He also is picking the brains of "Friends Helping Friends" organizers, hoping to work with or even start a similar organization in his new football home, Kansas City.