ATLANTA - There isn’t a "most likely to work in NASCAR" senior superlative at Lovejoy High School, but two classmates who graduated in 2002 have since worked their way to the highest levels of the sport.

Dwayne Moore is an over-the-wall crew member for the No. 41 Ford of Cole Custer, and Courtney McGarry Weber is Director of Communications at Richard Petty Motorsports, working mainly for the number 43 Chevy of Erik Jones.

Their frienship is quite literally decades in the making – from Kemp Elementary and Rivers Edge Elementary all the way up to Lovejoy High, which is 5.6 miles away from Atlanta Motor Speedway.

"It’s a sense of home. It’s the sense of where we came from," McGarry Weber told FOX 5 Sports. "The fact that he probably remembers all my bad hair styles throughout high school, and we all tried to pretend like we were different people back then. But no, it was pretty cool. It was heartwarming for sure."

Both went to their first races at AMS in 1989. McGarry Weber started volunteering at the track’s media center in 1999. Moore got his foot in the door with the driving school at AMS and then went to pit crew school in North Carolina.

A few years after that, these two faces that hadn’t seen each other since walking the hallways of Lovejoy High reconnected one race day on pit row.

"When you go to Atlanta, you expect to see maybe some fans that you know or stuff like that, but never when you’re working a different racetrack not in Atlanta," Moore said, recalling the first time he saw McGarry Weber while working a race. "You’re like, wait a minute. I know you! How have you been? And lo and behold, she’s here for good. She’s here with me. She’s doing the same thing I am every weekend."

"I remember the exact moment on Facebook when I saw that he was working for a team, I was like wait, you’re up here and doing this?" McGarry Weber said. "But we came from the same exact place, we were given the same opportunities and how we seized them and how we created our own paths just shows that NASCAR is all about passion, it’s all about heart, it’s all about the people."

Coming home to AMS this weekend reminds them of their separate but parallel paths. 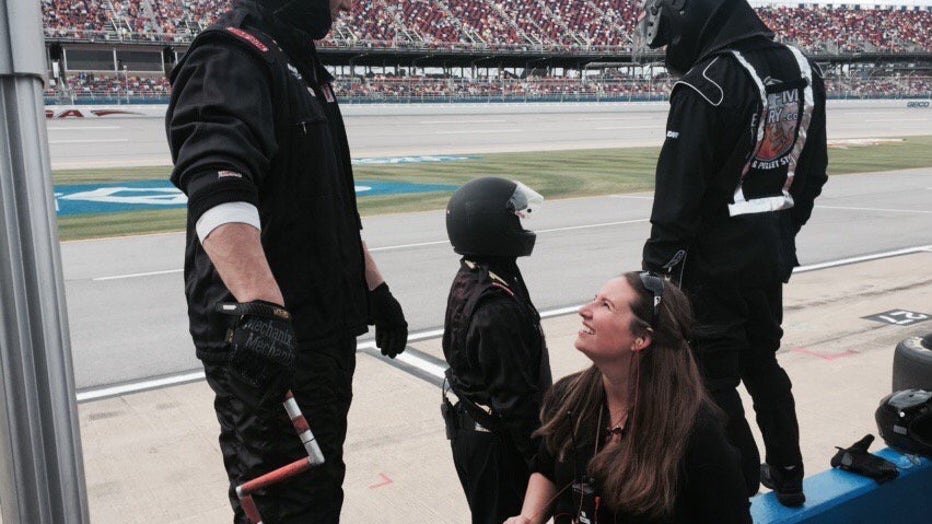 And amid that flood of childhood memories, McGarry Weber relishes seeing a familiar face on pit row every week.

"Every time that I see him, it’s a great sense of pride knowing where we both came from," she said. "The fact that Dwayne has a Daytona 500 championship ring is just absolutely to me inspiring. He went from that kid wearing those NASCAR T-shirts down the hallway of just being a proud fan to living his passion and his dream, and I think for me, seeing how hard he worked and seeing him on pit road is also like a sense of home."

Moore said it’s still on his bucket list to win at AMS, never having done that at any level. He said they should have multiple top-10 finishes this season already, but the No. 41 has hit a stretch of bad luck.

"Atlanta has haunted me," he said, laughing. "I have tried to win so many races. And I’m one pit crew guy, so it’s not like I’m going to change the outcome of that race, but I have been so close so many times trying to win that race, and I can’t. I haven’t won at Atlanta Xfinity, truck, Cup, nothing. So hopefully Cole can get that done this weekend."