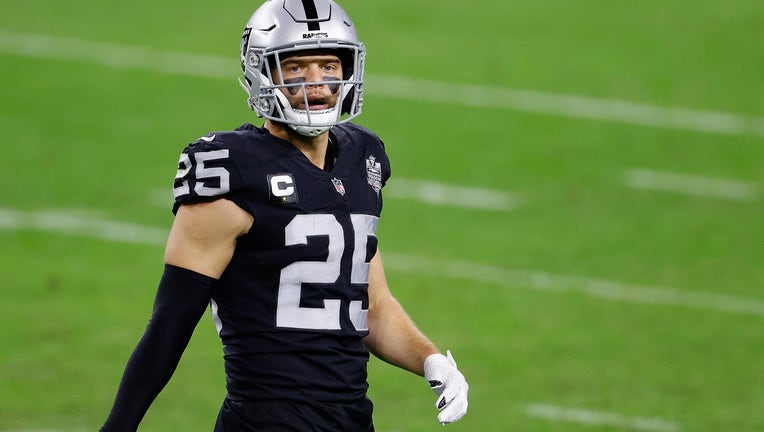 LAS VEGAS, NEVADA - DECEMBER 17: Free safety Erik Harris #25 of the Las Vegas Raiders during the NFL game against the Los Angeles Chargers at Allegiant Stadium on December 17, 2020 in Las Vegas, Nevada. The Chargers defeated the Raiders in overtime 3

ATLANTA - New Falcons safety Erik Harris' work ethic was forged maybe not in fire, but above a deep fryer.

Before getting a shot in the NFL, Harris worked 11-hour shifts at an Utz potato chip factory, pouring 50-pound bags of corn flour into a mixer that would then deposit it into a deep fryer -- all in 110-degree conditions above the 600-degree oven.

The fact that he can admittedly put down more than a few bags of his favorite salt and vinegar chips did not make that summer job more enjoyable.

"Man, it was the worst job in the whole plant," Harris recalled. "It was very humbling. I do not miss that job, but I am thankful for that job."

That job, along with another short-term gig as a UPS manager, was just one of a series of challenges that shaped Harris' work ethic and perspective along his path, which has now led him to the Atlanta Falcons.

Two odd jobs and a short CFL career were just a few of a series of challenges&nbsp;that shaped Harris' work ethic and perspective along his&nbsp;path, which has now&nbsp;led him to the Atlanta Falcons.

He was a walk-on at Division II California University of Pennsylvania and went undrafted in 2012, playing for the Hamilton Tiger-Cats of the Canadian Football League for three years before the Saints signed him to a reserve/future contract in 2016.

"(Those challenges) allowed me to see the people that mean the most to me in my life, to see those people that are going to be right there beside me going through the struggles," Harris told FOX 5 Sports. "Also just, you know, allowing me to continue to fight through all through all the adversity. I'm very thankful for what I've been through. I think I can be very transparent for other people in my situation; not everybody gets to go to big DI schools and be a first-round, second-round draft pick. So there's a lot of guys out there that are overseen, and that can relate to those guys obviously, so I just encourage everybody to continue to chase their dreams and have faith in what they do."

It was in New Orleans that he connected with now-Falcons GM Terry Fontenot, who was a big part of why Harris came to Atlanta.

"I can't say enough good things about Terry. He's a great guy, great husband, great father," Harris told FOX 5 Sports. "I got to see every side of Terry as far as you know just who he is and his character and, you know, that was really drawing me in to sign with Atlanta, and I'm excited to be a part of this thing."

Harris said he doesn't like the term "rebuilding" to describe where the Falcons are at right now.

He calls it "an opportunity," and he sees himself thriving in this type of situation.

"The thing that I'm most excited about is the pieces that we have here," he told FOX 5 Sports. "The record doesn't show that, but they have a lot of pieces. I keep saying 'they,' but we have a lot of pieces now. So that was very exciting to know that the roster is there. It's just, I feel like maybe more of a culture thing. I haven't really met a lot of the guys yet, so I'm excited to just kind of get into the locker room to just get to talking to guys, building that camaraderie between us amongst us, and, you know, just being the best version I can be for our locker room."

In three seasons, Harris recorded 79 tackles and three interceptions over 45 games. He started 26 of 30 games for the Raiders over the last two years.

His leadership and communication skills helped him earn the starting safety job in Las Vegas last season, and he hopes to continue that in Atlanta, especially after the Falcons lost longtime "quarterback on defense" Ricardo Allen.

"Great player, a lot of respect for his game, and have heard great things about him. So, yeah, I don't want to be a step off of that," Harris said of Allen. "If anything I want to try to elevate that, and no knock on him or anything, I just want to be the best I can be for that locker room so I just want to continue to where he left off and just be be a leader for those guys. And just make everybody comfortable, make a sense of calmness when we're on the field, that we can just play fast, (that) we all have communication, get to learn how we play off of each other, and just have fun while we're doing it."