Residents are trying to pick up the pieces after an explosion rocks a Dunwoody apartment complex. It happened at Arrive Perimeter apartments not far from Perimeter Mall. Four people are recovering from their injuries. About 50 people are out of their homes.

DUNWOODY, Ga. - A woman hurt in the explosion at a Dunwoody apartment complex is taking the first steps toward a possible lawsuit.

The Morgan & Morgan law firm tells FOX 5 Sherelle Baker has hired them to investigate her case.

Baker claims she was parked outside the Arrive Perimeter apartment complex located in the 2000 block of Asbury Square Sunday afternoon when the explosion occurred.

Her attorneys say debris from the blast broke through her windshield, knocking her unconscious.

"We are actively investigating the explosion to determine what happened and whether the complex’s recent change in management was a contributing factor. Our hope is to uncover all the facts about what caused this explosion, secure justice for Ms. Baker and all those impacted, and hold all responsible parties accountable for their possible actions and inactions," Baker's attorneys said in a statement to FOX 5. 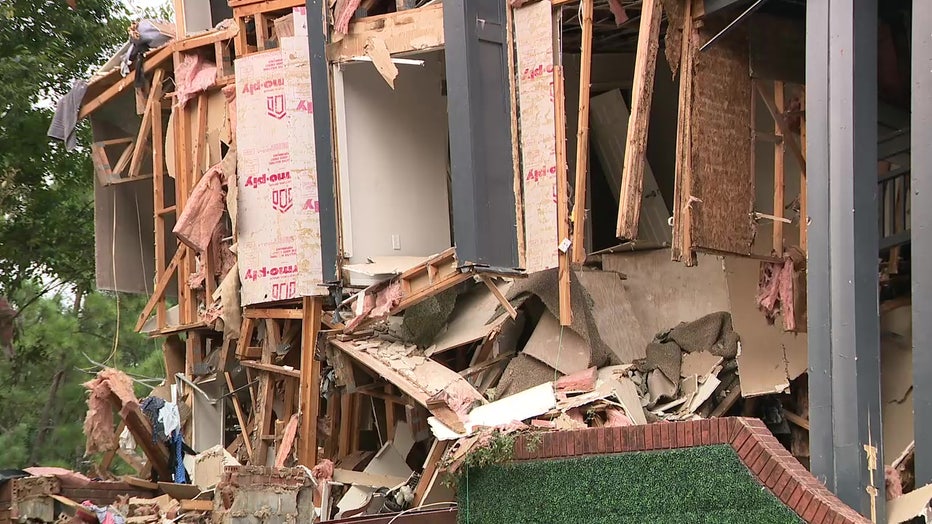 While the official cause of the blast remains under investigation, there were several reports of the odor of gas before it happened.

On Monday, the city inspected the remaining units and officials said they found at least two leaks in a building that wasn't involved in Sunday's explosion.

A city spokesperson said shutting off gas to the complex will allow time for repairs and additional inspections in all buildings.

Nearly 50 units were damaged in Sunday’s blast and four people were injured. Officials said one person was burned and another has a broken leg. Their conditions as of Monday evening were not immediately known.

Officials said one person was burned and another has a broken leg. Their exact conditions were unknown to DeKalb Fire officials on Monday morning. DeKalb County Fire Rescue Captain Jaeson Daniels said initially on Sunday four people were taken to the hospital with minor injuries.

Officials said all residents were accounted for by 6 p.m.

The American Red Cross of Georgia was at the scene to help those impacted by the explosion. Officials said they expect to help the residents of about 40 to 50 units.