Four people were injured and several dozen displaced after an explosion at a Dunwoody apartment complex.

DUNWOODY, Ga. - Four people were injured after an "explosion" at a Dunwoody apartment complex on Sunday afternoon believed to have been caused by some sort of gas line issue, DeKalb County Fire Rescue said. Officials said about 40 to 50 units were destroyed.

It happened at the Arrive Perimeter apartment complex located in the 2000 block of Asbury Square, less than a mile northeast of Perimeter Mall. Dunwoody police said they were notified at around 1:24 p.m. on Sunday.

Four people were taken to the hospital with minor injuries, DeKalb County Fire Rescue Captain Jaeson Daniels said. Two more people were not immediately accounted for, but have since been located and as of 6 p.m., officials said all residents were accounted for.

SKYFOX 5 was over an apartment explosion in Dunwoody on Sept. 12, 2021. Four people were injured. Employees said they smelled the odor of gas, but firefighters are still investigating the cause.

Crews are working to assess the stability of the building and shore it up to allow rescue workers to search inside. Fire investigators said at least three apartments were destroyed in the blast and caused a partial collapse of the building. Officials are using drones to help assess the damage.

A few pets inside the apartments were also reportedly rescued.

Fire officials said more than 70 firefighters responded to the scene for the initial call. Crews are expected to work well into the evening saying it will be "slow-moving." 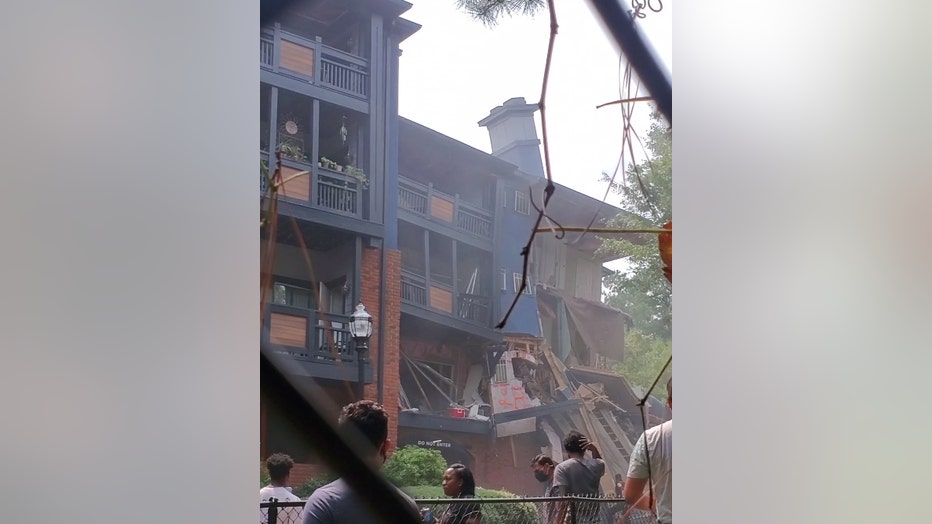 Residents of a Dunwoody apartment complex look at the aftermath of an alleged "explosion." Credit: Dezmon Green (FOX 5 Atlanta)

Officials with Atlanta Gas Light issued a statement around 9:30 p.m. that reads:

"Our crews have now completed safety checks of all relevant Atlanta Gas Light facilities to ensure those not impacted by the incident are operating safely. Natural gas remains turned off to the apartments directly impacted by the incident, and there are no additional service outages. We will continue to work with local and state agencies as they continue the investigation."

The official cause of the explosion remains under investigation.

All utilities to the building have been disconnected.

Dunwoody police said Perimeter Center North was shut down as part of the response.

The entrances and exits to the apartments were also shut down for a time and residents not impacted by the blast were asked to shelter in place.

A FOX 5 News viewer shared a video that showed the blast caused some severe structural damage to a building. Debris could be seen around the building and part of the exterior appears to have collapsed.

The Red Cross is at the scene to help those impacted by the explosion. Officials said they expect to help the residents of about 40 to 50 units.

"Volunteers established a reception area at a nearby hotel parking lot for people awaiting news on whether they could return to their buildings. The Red Cross provided food, water and health and emotional support throughout the day, and is also offering shelter tonight for residents in need of temporary lodging," Red Cross officials wrote in a statement. "Red Cross caseworkers will continue to work with displaced individuals and families in the days ahead, sharing recovery planning and resources to help them get back on their feet."