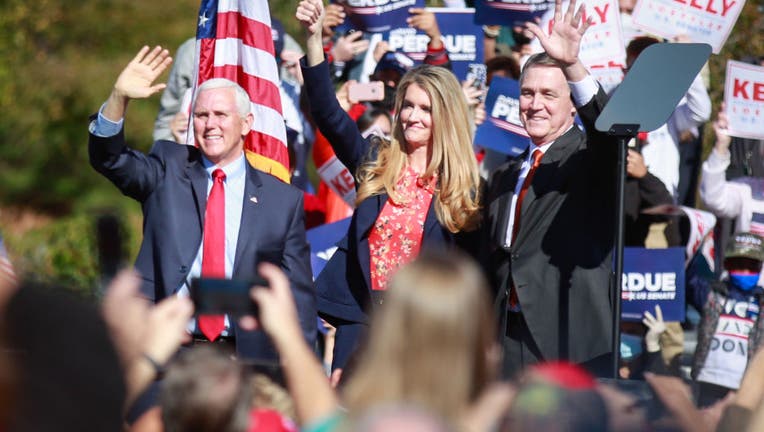 SAVANNAH, Ga. - Vice President Mike Pence is heading back to Georgia to rally in support of Republican Sens. David Perdue and Kelly Loeffler.

Officials say Pence will travel to Savannah Friday for a Defend the Majority Rally with the senators after a visit to the Centers for Disease Control and Prevention.

At the CDC, the vice president is planning to be briefed on the progress and upcoming distribution of a COVID-19 vaccine.

Pence's visit comes one day before President Donald Trump plans to come to Georgia to campaign alongside the Republican senators, who face strong Democratic challengers in Jan. 5 runoffs that will determine which party controls the Senate at the outset of former Vice President Joe Biden’s presidency.

The GOP needs one more seat in the Senate for a majority. Democrats need Jon Ossoff to defeat Perdue and Rev. Raphael Warnock to defeat Loeffler to force a 50-50 Senate, positioning Vice President-elect Kamala Harris as the tie-breaking majority vote.

On Monday, Trump blasted Gov. Brian Kemp as “hapless” for not intervening to “overrule” Secretary of State Brad Raffensperger’s certification of Biden’s win. A day earlier, Trump told Fox News he was “ashamed” he’d endorsed Kemp in his 2018 GOP primary for governor. Kemp’s office noted in response that state law gives Kemp no authority to "interfere" with the election results, despite Trump’s contention that Kemp could “easily” invoke “emergency powers.” Meanwhile, Raffensperger, a Trump supporter like Kemp, has accused the president of throwing him “under the bus” for doing his job.

Perdue and Loeffler have attempted to stay above the fray.

They’ve long aligned themselves with Trump and even echoed some of his general criticisms of the fall elections, jointly demanding Raffensperger’s resignation. But the crux of their runoff argument — that Republicans must prevent Democrats from controlling Capitol Hill and the White House — is itself a tacit admission that Biden, not Trump, will be inaugurated Jan. 20. And at one recent campaign stop, Perdue heard from vocal Trump supporters who demanded that he do more to help Trump somehow claim Georgia’s 16 electoral votes.

Pence previously came to Georgia for an election rally on Nov. 20.