Secretary of State Brad Raffensperger gives an update on the Georgia recount.

ATLANTA - Georgia Secretary of State Brad Raffensperger announced Monday that his office has opened investigations into the activities of four voter registration organizations ahead of the January 5 Senate runoffs.

According to Raffensperger, America Votes has sent absentee ballot applications to people at "addresses where they have not lived since 1994."

“America Votes has mailed registered voters in Georgia applications to safely and securely vote by mail in the January runoffs. These mailings were sent to the list of registered voters maintained by the Secretary of State," said America Votes Spokesperson Sahil Mehrotra in an email to FOX 5.  "We’re pleased that so many Georgians have already applied to vote by mail this election and will continue our work to make sure every voice is heard in January.”

Georgia Secretary of State's Office gives an update on the presidential recount.

Finally, Sec. Raffensperger alleged that Operation New Voter Registration Georgia advised college students that they could change their residency to Georgia in order to vote in January and then change it back after the election.

"Your current residence can be another state.  You are simply changing your state of residence now; and it can be switched back for future elections (your option)," reads a flier.

It is not clear, however, who has distributed the information, because an email sent to the address provided for the organization bounced back.

"Let me be very clear again--voting in Georgia when you are not a resident of Georgia is a felony," said Raffensperger.  "And encouraging college kids to commit felonies with no regard for what it might mean for them is despicable."

The Secretary of State announced his office is also investigating over 250 open cases connected to the state's November election.

While none of these claims have been verified, Raffensperger said the specificity of the charges will allow his 23 investigators to see if they are legitimate or not. 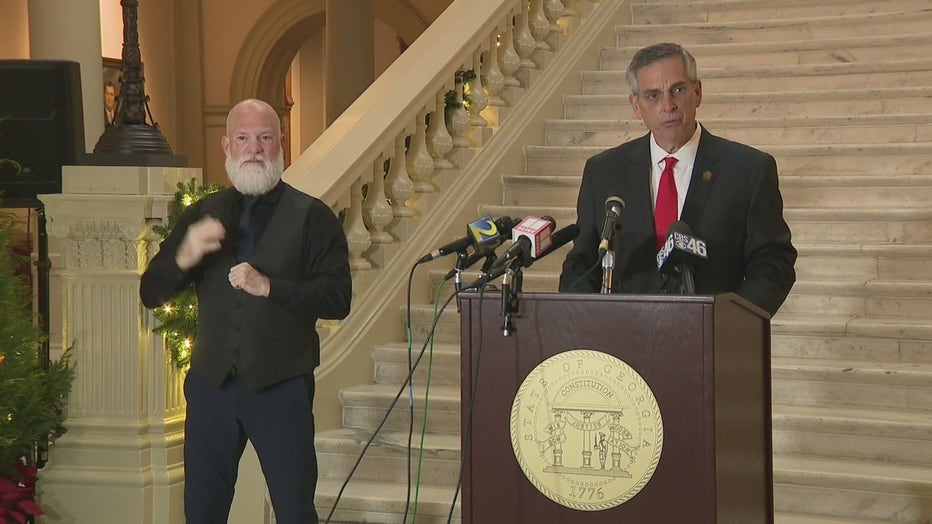 With the recount nearly finished, the Secretary of State is about to begin two other elections - the Dec. 1 election to fill the remainder of the late Congressman John Lewis' seat, and the Jan. 5 Senate runoffs between Sen. David Perdue and Jon Ossoff and Sen. Kelly Loeffler and Rev. Raphael Warnock.

In the latter election, elections official Gabriel Sterling says around 940,000 absentee ballots have been requested so far with 140,000 ballots already returned to counties around the state.