ATLANTA - Tributes from friends, family, celebrities, and dignitaries from around the world poured in after the passing of Atlanta Braves legend and Baseball Hall of Famer Hank Aaron was announced Friday morning.

The home run king, who accomplished a massive amount of achievements both on and off the field, died peacefully in his sleep, the Braves said in a release.

President Joseph Biden released a statement on the passing of Hank Aaron that reads:

"When I watched Henry Aaron play baseball, I knew I was watching someone special. It wasn't just about watching a gifted athlete master his craft on the way to a Hall of Fame career as one of the greatest to ever play the game. It was that each time Henry Aaron rounded the bases, he wasn’t just chasing a record, he was helping us chase a better version of ourselves.

"With courage and dignity, he eclipsed the most hallowed record in sports while absorbing vengeance that would have broken most people. But he was unbreakable. He stemmed the vicious force of white supremacy, in death threats, hate mail, and in hardened hearts. What I deeply admired and respected about him is that each time he rounded those bases — an astonishing 755 trips home — he melted away more and more of the ice of bigotry to show that we can be better as a people and as a nation.

"Henry Aaron became, in the words of President Carter, ‘the first Black man for whom white fans in the South cheered.’ It was not only his bat, but his character that won over those hearts and minds. For generations of athletes and civil rights advocates who followed, he showed how to be proud and be unafraid to stand up for what is right and just.

"Jill and I count ourselves among the many millions of Americans who are grateful for the memories he gave us and our families. As a nation, we will still chase the better version of ourselves that he set for us. As we do, we mourn his passing and send our prayers to his beloved Billye, their children and grandchildren, and the entire Aaron family.

"Our family is heartbroken to hear the news of Hank Aaron's passing. Hank Aaron was an American icon and one of Georgia's greatest legends. His life and career made history, and his influence was felt not only in the world of sports but far beyond - through his important work to advance civil rights and create a more equal, just society. We ask all Georgians to join us in praying for his fans, family, and loved ones as we remember Hammerin' Hank's incredible legacy."

"While the world knew him as ‘Hammering Hank Aaron’ because of his incredible, record-setting baseball career, he was a cornerstone of our village, graciously and freely joining Mrs. Aaron in giving their presence and resources toward making our city a better place." 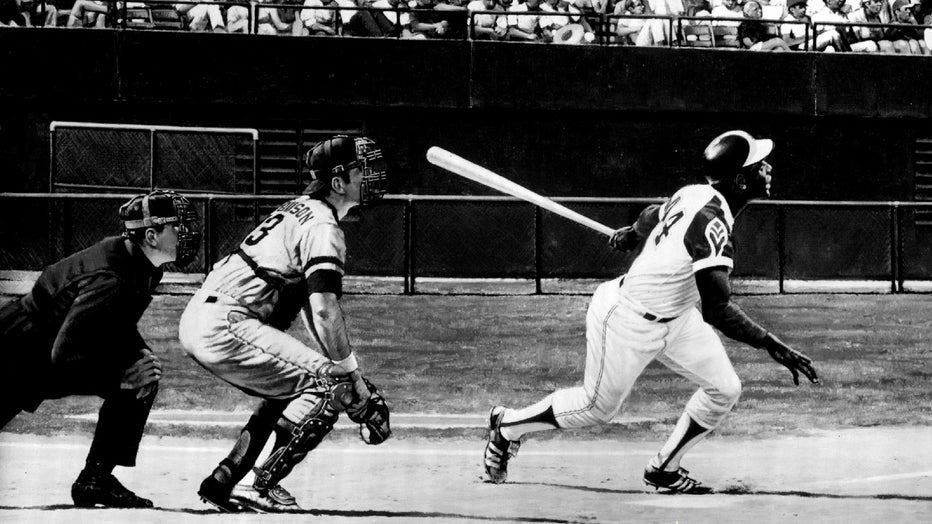 Hank Aaron hits his 715th home run, breaking Babe Ruth's long-standing record of 714 lifetime home runs. Even now, as Hank Aaron goes on establishing an even higher total, there is probably a Little Leaguer out there somewhere who will, in the future

Former President Jimmy Carter, who was Georgia's Governor when Aaron broke the home run record in 1974, released a statement following the passing of Aaron:

"Rosalynn and I are saddened by the passing of our dear friend Henry Aaron. One of the greatest baseball players of all time, he has been a personal hero to us. A breaker of records and racial barriers, his remarkable legacy will continue to inspire countless athletes and admirers for generations to come. We send our love to Billye and their family and to Hank’s many fans throughout the world." 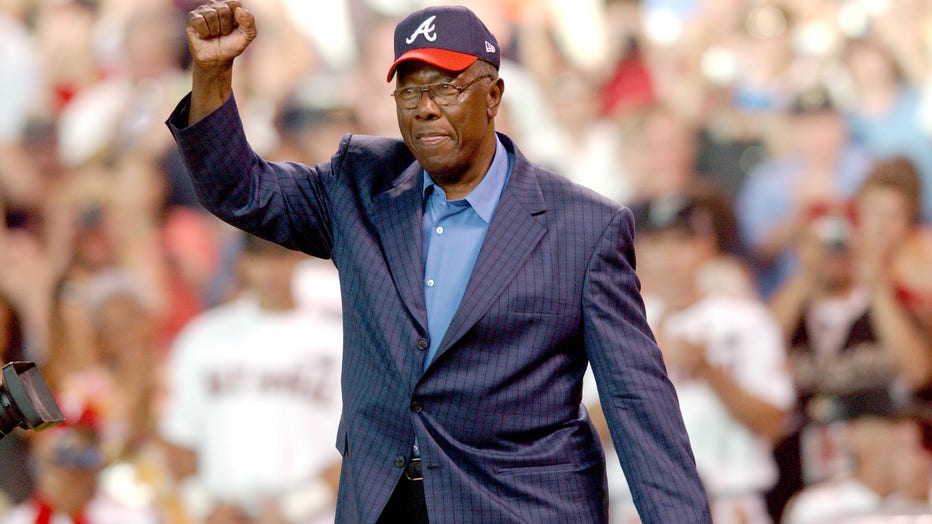 Hank Aaron waves to the crowd as he is saluted as one of the members of the 500 home run club prior to the start of the 2004 Home Run Derby at Minute Maid Park in Houston, Texas July 12, 2004. (Photo by Steve Grayson/WireImage)

Former President Barack Obama paid tribute to Aaron in a tweet, saying in part that "Aaron was one of the best baseball players we've ever seen".

"A child of the Jim Crow South, Hank quit high school to join the Negro League, playing shortstop for $200 a month before earning a spot in Major League Baseball. Humble and hardworking, Hank was often overlooked until he started chasing Babe Ruth’s home run record, at which point he began receiving death threats and racist letters — letters he would reread decades later to remind himself ‘not to be surprised or hurt.’ Those letters changed Hank, but they didn’t stop him."

"The former home run king wasn’t handed his throne. He grew up poor and faced racism as he worked to become one of the greatest baseball players of all time. Hank never let the hatred he faced consume him."

"America lost an extraordinary soul in @HenryLouisAaron. On the field, he brought power + purpose. In the community, Hank Aaron invested in progress, in people & in dreams."

"The ultimate Home Run King, Hank would often remind us to ‘Keep Swinging.’ He said, ‘My motto in life was to keep swinging, whether I was in a slump on the field, feeling bad or having trouble off the field — JUST KEEP SWINGING.’ I will miss you my friend, but you inspired me to KEEP SWINGING."

The Braves shared a photo of Aaron's number 44 jersey hanging in the locker room.

Braves fans flock to Truist Park, the home of the Atlanta Braves, to honor the passing of legendary slugger Hank Aaron.

Falcons QB Matt Ryan acknowledged the impact Aaron had on Atlanta and the entire country.

It was in Atlanta-Fulton County Stadium on April 8, 1974, that Aaron, in front of a sellout crowd hit the 715th home run of his career, breaking the mark of Babe Ruth. 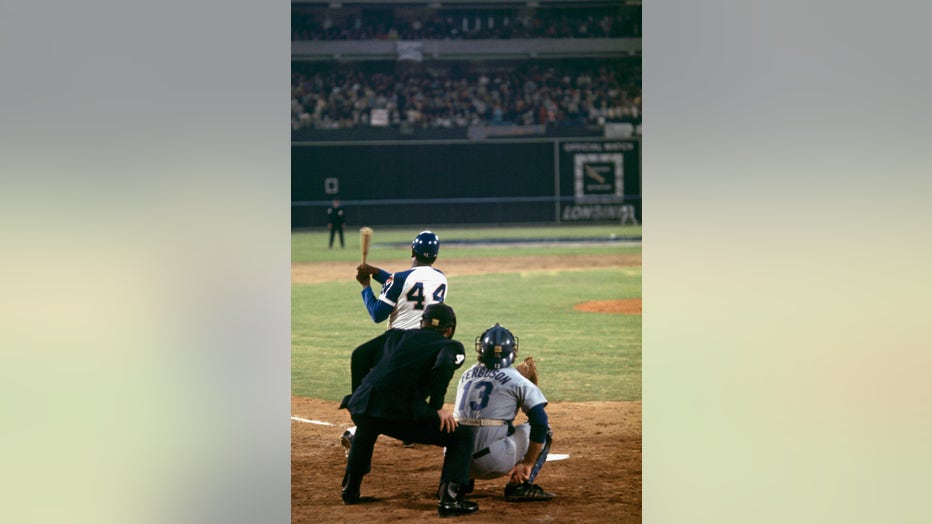 "Thank you for everything you ever taught us, for being a trailblazer through adversity and setting an example for all of us African-American ballplayers who came after you. Being able to grow up and have the idols and role models I did, help shape me for a future I could have never dreamed of."

"Not long ago, he and I were walking the streets of Washington, D.C, together and talking about how we’ve been the best of friends for more than 60 years. Then Hank said, ‘Who would have ever thought all those years ago that a Black kid from Mobile, Alabama, would break Babe Ruth’s home run record and a Jewish kid from Milwaukee would become the commissioner of baseball?’ Aaron was beloved by his teammates and by his fans. He was a true Hall of Famer in every way."

"Hank symbolized the very best of our game, and his all-around excellence provided Americans and fans across the world with an example to which to aspire. His career demonstrates that a person who goes to work with humility every day can hammer his way into history — and find a way to shine like no other."

"I can’t imagine what Hank Aaron went through in his lifetime. He spread his grace on everything and every one he came in contact with. Epitome of class and integrity."

"The word that keeps coming to me when I think about Hank Aaron Is Love. He was the epitome of it. Every conversation and every meeting you had with him he made you feel loved. A legend in every sense of the word, Hank has meant so much to me and so much to the Atlanta community and beyond. Hank was one of the greatest baseball players of all time, a champion civil rights activist and a role model for everyone. Thank you Mr. Aaron for everything you gave and taught. #Forever44."

One was a future Hall of Famer, the other was a legendary Atlanta broadcaster. The careers of former FOX 5 Sports director Bill Hartman and Braves slugger Hank Aaron seem to have developed into the stuff of legend, walking the path of the Atlanta sports scene together.

"Hank Aaron’s incredible talent on the baseball field was only matched by his dignity and character, which shone brightly, not only here in Cooperstown, but with every step he took. His courage while pursuing the game’s all-time home run record served as an example for millions of people inside and outside of the sports world, who were also aspiring to achieve their greatest dreams."

Reflecting on the life of Hank Aaron

"Hank was a great ballplayer who played hard every day and accomplished so much on and off the field. Although we were never teammates, we played in many All-Star games together and I enjoyed our friendship over the years. He was a very humble and quiet man and just simply a good guy."

Glavine and Smoltz on Aaron

"On the field, off the field, for 23 remarkable playing seasons and beyond, Hank Aaron was a Hall of Famer in every sense of the phrase. Generations of players have walked, and will continue to walk, on a trail that Hank Aaron blazed with his determination, courage, singular talent and grace."

"We lost an icon today, one of the greatest athletes to ever wear a uniform. Wisconsin lost a legendary figure, and I lost a great teammate and friend. I will always cherish my time with Hank ... all the laughs we shared, and all the unforgettable stories. Hank loved Wisconsin, and we loved him back."

"Hank Aaron changed my life. The greatest moment I ever got to be a part of was catching 715. That moment bonded us forever as friends and teammates. We watched Hank shrug off the weight of the world and just keep swinging."

"Gibson, Ford, Brock, Seaver, Kaline, Morgan, Niekro, Lasorda, Sutton and now Hammerin Hank. We’ve lost some of the greatest to ever do it this year. @TommyLasorda is gonna have a hell of a roster to manage up there."

"When the RBI award came out in 1986, it was the Hank Aaron Award, and I was the first recipient of it, and I’ve got his jersey in my basement, hanging on the wall, right next to my Hank Aaron RBI trophy. What a tremendous ambassador for the game, what a great player, what a humanitarian. As far as I’m concerned, I still recognize him as the all-time home run leader."

Good Day Atlanta anchor and former Braves outfielder Ron Gant talks about his mentor, Hank Aaron, and the humility he shared with all on his team.

"I still remember where I was back in the day when he set the record. While a legendary athlete, Hank Aaron was also an extraordinary businessman and paved the way for other athletes like me to successfully transition into business. Hank Aaron is on the Mount Rushmore for the greatest baseball players of all time!"

Aaron is survived by his wife, Billye, and their daughter, Ceci. He also had four children from his first marriage to Barbara Lucas — Gail, Hank Jr., Lary and Dorinda.