CHEROKEE COUNTY, Ga - When the rain and lightning moved through Cherokee County Monday morning, a single bolt of lightning caused some major damage.

Jenna Baldwin was having her morning coffee when she heard the thunder than a huge crash. A 90-foot tree in the backyard of her home at the Bradshaw Farm subdivision had shattered.  Pieces and limbs of the tree shot through two upstairs windows.

"It exploded and became a missile. We went upstairs and looked in the bedroom and there were two trees that had come through the windows. Knocked a chair across the room, so it must have been flying," said Baldwin.

Another 18-foot section of the tree flew into the air and came straight down, lodging upright in the ground. 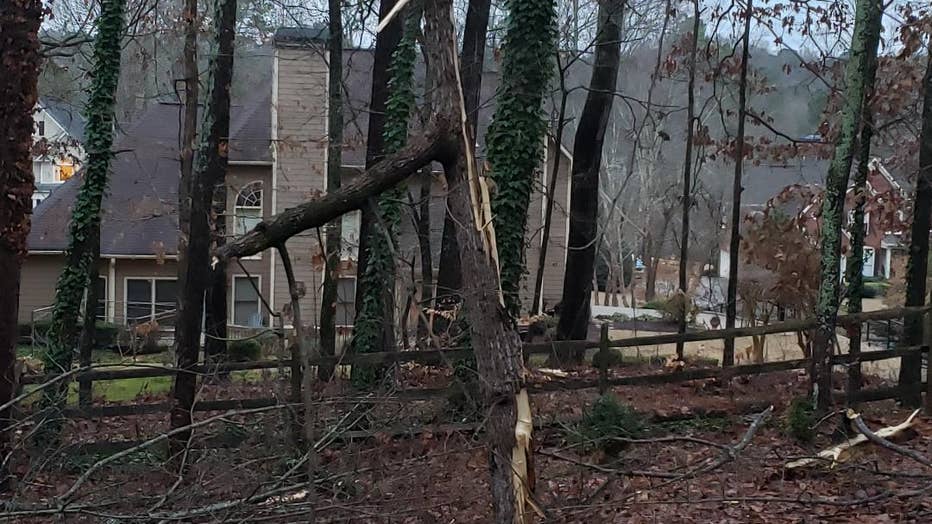 Nextdoor at the Murphy house, the cable box blew off the home. The cover landed several yards away.

They ran for safety in the basement.

Throughout the day as repairs were underway at the Baldwin home, they were in awe of the power of mother nature.

"It's very powerful, that limb that went through the window weighs 200 to 300 pounds. It took three men just to push it out the window. No one was in the bedroom, we are very lucky," said Baldwin.