ATLANTA - One of Georgia's top election officials took aim at President Donald Trump the day after the U.S. Senate runoffs.

Speaking to the press Wednesday morning, Voting Systems Implementation Manager Gabriel Sterling said the blame for Trump's loss in November and the potential loss of both of Georgia's Senate seats in the runoff races lay directly with "President Donald J. Trump."

"When you say 'your' vote doesn't count' and you lay your hands on people who say 'don't come and vote' then you spark a civil war in a GOP that needed to be united to get through a tough fight like this in a state that has been trending, in the point of view of Republicans, the other way for years now," Sterling said.

Sterling said that Trump's actions since his election loss "irritates [him]." 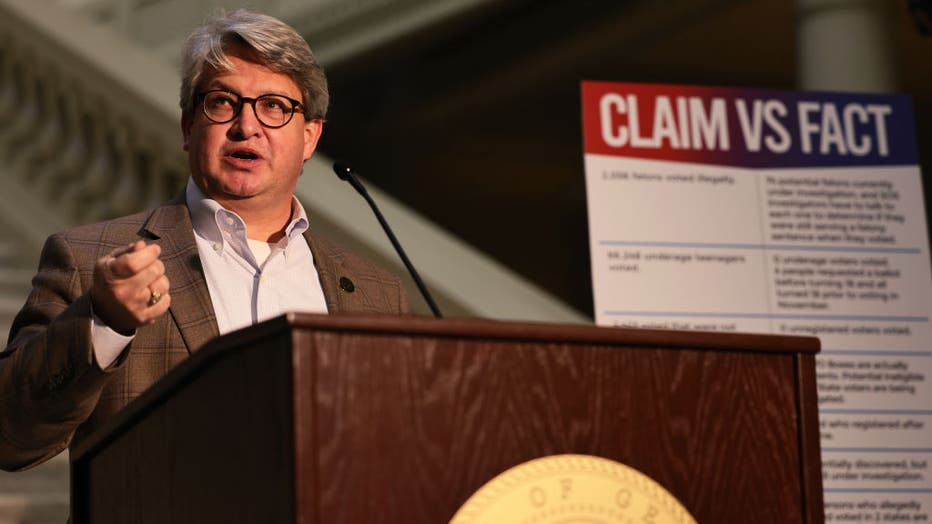 "If you look at the last few months, the President of the United States spent more time attacking Gov. Kemp and Secretary of State Raffensperger than he did attacking Raphael Warnock and Senator-to-be-probably Jon Ossoff," he said, citing an unnamed CNN commentator.

Part of the blame, in Sterling's opinion, was the attack on mail-in voting and early voting - an action he said depressed turnout.

"While the Republicans were busy attacking the governor and my boss, the Democrats were out there knocking on doors and getting people out there to vote," he said, pointing specifically to Trump and new congresswoman Marjorie Taylor Greene.

Sterling, who is a lifelong Republican, also said that there was no sign of major irregularities or fraud in the runoff.

"The biggest thing we’ve seen is from the president's fertile mind that finds fraud where none exists," he said.

Warnock will become the first Black senator from Georgia and the 11th in American history.

According to Sterling, over 4.4 million Georgians voted in the Senate runoff - with the majority of those voters choosing to vote before Election Day. Around 1.3 million votes were cast on Tuesday.

Sterling previously criticized the president, Perdue and Loeffler, who he said he still fully supports, for not coming out against the multiple threats being made on Georgia Secretary of State Brad Raffensperger, his wife, and numerous elections officials and contractors.