Attorneys for two local college students and Rayshard Brooks are pleading for the Attorney General's Office to appoint a special prosecutor in the cases.

ATLANTA - Three Atlanta families are in limbo after meeting with the Fulton County District Attorney who has refused to prosecute a police shooting and the arrest of two college students.

"We were happy to sit down with her face to face," the attorney for Rayshard Brooks' widow Tomika Miller said.

They believe no one wants to prosecute these high-profile cases involving the deadly police shooting of Brooks at the Wendy's and the controversial arrests of two college students this past summer. 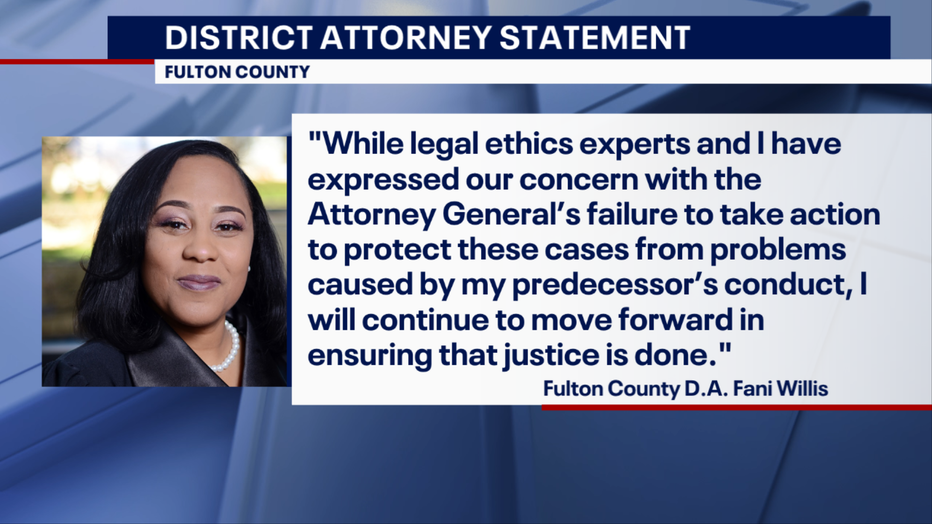 "It is clear she believes a special prosecutor is better suited to handle this case. So the only thing we can do is support that," attorney Chris Stewart remarked.

"Not only did you hurt me, but you hurt everyone who was out here counting on you," an emotional Tomika Miller exclaimed.

Brooks' widow blasted the Fulton County DA in an emotional plea to prosecute the case earlier this month after Willis sent a letter to Attorney General Chris Carr saying she could not prosecute the case because her office had a conflict of interest. "The three reasons given: that the former DA made unethical statements in public, the DA might be a witness and  that the former DA had a conflict of interest because of the GBI investigation. None of those reasons have anything to do with the newly elected DA," attorney Harold Spence questioned.

The families say they are caught in the middle of a political fight with no end in sight.

"They are in counseling. This makes matters worse," father Charles Young revealed.

"We want a resolution. This is gutwrenching," Father Toine Pilgrim concluded.

"I had a productive meeting with the families and their attorneys. As I have stated publicly, I am committed to doing my best to ensure that justice is done in these cases and in every matter that comes to my office.

"I assured the families that they can count on my staff and me doing everything we can to make sure these cases are handled appropriately, and that we will keep them and the community informed. While legal ethics experts and I have expressed our concern with the Attorney General’s failure to take action to protect these cases from problems caused by my predecessor’s conduct, I will continue to move forward in ensuring that justice is done."

Georgia Attorney General Chris Carr had this to say:

"Our office maintains that the reasons provided by the Fulton County District Attorney in the first and second requests fail to meet what is required to invoke the conflict statute.

"In her letters, the Fulton County District Attorney makes a good case for why her predecessor has a conflict but not her own. The primary role of the Attorney General is to follow the law as written."