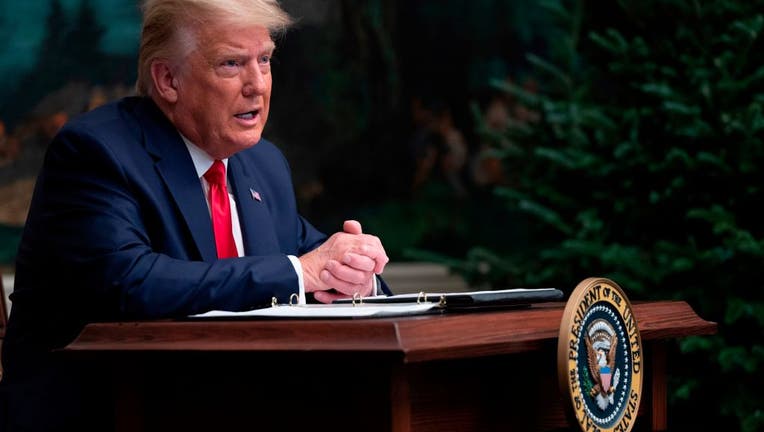 US President Donald Trump speaks to reporters after participating in a Thanksgiving teleconference with members of the United States Military.

ATLANTA - President Donald Trump says that he plans to visit Georgia to help boost support for Republican Sens. David Perdue and Kelly Loeffler ahead of the January runoffs.

Speaking to reporters on Thanksgiving after a call with U.S. troopers, Trump told reporters that he was in conversation with both senators and wants to help them in their races against Democratic challengers Jon Ossoff and Rev. Raphael Warnock.

“Speaking of Georgia, we’re going there. I spoke with the two great senators today. I’ll probably be going on Saturday,” Trump said.

The president also resumed attacks on the way Georgia ran its presidential election - saying it was a "fraudulent system" and criticizing Republican Secretary of State Brad Raffensperger.

"He is an enemy of people, the Secretary of State, and whether he's Republican or not, this man what he's done," Trump said.

Trump's comments come a few days after Raffensperger penned an op-ed criticizing President Trump's campaign's for questioning Georgia's election results titled "My family voted for Trump. He threw us under the bus anyway."

"A losing presidential campaign refused to accept the facts, following a playbook written by a failed gubernatorial candidate two years before. A failed Senate candidate with nothing to do tried to undermine the integrity of Georgia’s elections," Raffensperger wrote.

The Secretary of State has maintained there was no evidence of widespread voter fraud in the state's election. He reiterated that elections are and should always be non-partisan.

The Jan. 5 runoff elections will determine which party controls the Senate at the outset of a Biden administration.

While FOX News reports that Trump intends to hold some type of campaign rally, details about the visit have not been released.